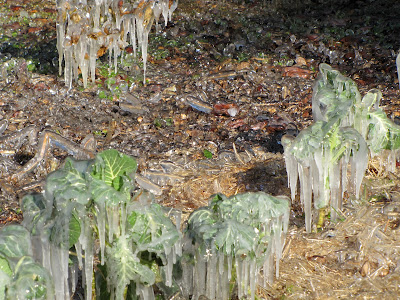 Shitfire but this is getting ridiculous. 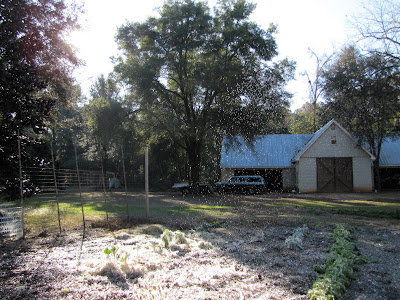 Despite leaving the sprinklers all on, we've lost three out of four from the cold. The one that's still running left us this ice-plot. I'm not feeling so bad about not having planted cabbages and spinach now. They'd be dead anyway.

I go out in the mornings and pour hot water over the chicken waterer. It doesn't thaw the water but it leaves enough in the tray for them to circle 'round and get a drink. 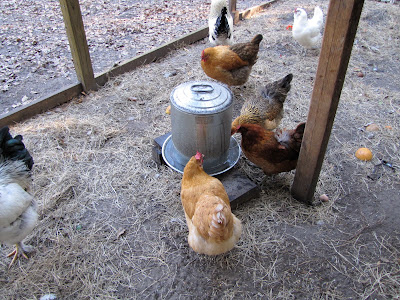 While I was out taking pictures, I had to get one of Elvis. That rooster has grown into a magnificent bird. 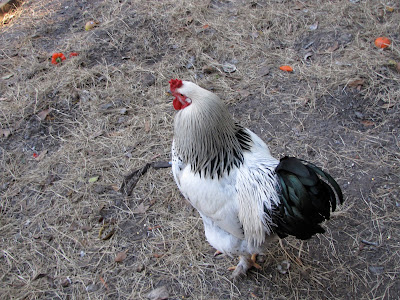 He towers over Sam and outweighs him by a pound, at least, I'd say. He knows it, too. Yesterday the roosters got out and Sam jumped on Miss Red who was already out, having rushed the door when I opened it for Betty because she is tired, I tell you, of being one of their favorite sex objects. Sam did his quick-quick tail-waggle and then Elvis pushed him aside, jumped on Red and showed Sam how it's really done. He had that hen FLAT. I mean, you could have made a lovely chicken cordon bleu with that poor little chicken.

"Elvis!" I shouted, but he took his time before he jumped off. And then Red reconstituted herself like one of those magic sponges you put in a glass of water and got to her feet and came over to see if I had anything for her.
Chickens are resilient and hardy birds.

Lily called me this morning to tell me that she was reading a rhyming book to Owen (she's such a good mama) and when she got to the page with the Little Black Hen, Owen grabbed for the book. I tell you, that boy already knows about chickens. He studies them with his big, brown eyes as seriously as if his life depended on it. Of course he studies everything like that but I'm sure he can already recognize a chicken. What a smart boy he is.

Oh Lord. Mr. Moon has discovered that we are dreadfully low on gas. As in- hardly any at all. And the gas guy can't come until tomorrow. Mr. Moon is pacing the house and he's set the thermostat down to fifty-five and well, what else can we do? It's Sunday. It's supposed to warm-up to forty-one today. Toasty! And every one of the five fireplaces in this house have long-since been converted to...gas!
And I cook with...gas! I don't know why we didn't expect this to happen. The fucking heat pump's been on without ceasing for a week.

The hen house may end up being the warmest spot on the property by the time this day and night are over.

Ah. We'll be all right. I have cashmere. I'm already so anxious today that the idea of freezing to death doesn't push my needle much farther into the red than it already is.

So, that's Sunday at my place, Mother Church Of The Batshit Crazy.