You Just Might Find, You Get What You Need

I woke up this morning rather sad and tried to get some comfort by petting Maurice who was sleeping mashed right up against me and that did not go well and I yelled at her because she grabbed me with her talons and bit me with her teeth and because that alerted Mr. Moon to the fact that I was awake, he came and cuddled me for a little while.
"I think I'll just stay in bed today," I said.
"Okay," he said. "I will too."
Of course we didn't. We got up and he got busy with more packing. He is a bit depressed that the forecast for Canada is going to be approximately what it is here for the next week or so. I mean, if you're going to drive all the way to Canada from Florida, you want to at least be able to wear a jacket. Am I right?
I hung around and read stuff online and then I came across the video you see above which is from last night's Stones concert in Charlotte, North Carolina which made me first smile and then laugh and then cry. Those old boys! They are obviously thrilled to be back onstage, doing what they do better than anyone else in the world. Doing what they, in fact, invented.
When Keith hits the chords for Jumping Jack Flash without even looking at his guitar, grinning like the happiest man on earth, I just lost it.
The Charlotte Observer ran a great review of the show and you can read it here if you have any interest.
Here's my favorite part:

And all Jagger had to do this time was spend the better part of 2 hours and 12 minutes running and skipping and jumping and hopping and dancing and strutting and waving his arms and clapping and punching the air, while belting out some of the most famous songs in the history of rock and roll music.

This is actually a pretty difficult thing to wrap my head around.

I mean, my dad is 78, and although he still takes a long walk every morning, trying to pull off moves like Jagger for 2 minutes and 12 seconds could very well give him a heart attack.

On top of that, my most recent experiences involving watching rockers in their senior years headline large venues include a November 2019 Spectrum Center show during which a then-72-year-old Elton John barely got up from his piano except to take a bow at the end; and a September 2019 Spectrum Center show during which a then-68-year-old Phil Collins, weakened by a string of physical ailments, crashed to the floor mid-set after tipping over in his chair.

I know. I KNOW. That's not funny but it sort of is.
So after I watched the video and read the review, I felt better and less old and creaky and damaged and done-in and decided to get off my ass and drive into town and do a quick Costco and Publix shopping which I did. I was so anxious, driving in, that I thought perhaps I should turn around and go home. But once I got going, everything worked out well and I just got what I needed and came home and put everything away and it's Friday so I've made up the bed clean again and it's been almost a normal day except for the fact that my husband has had camo-wear spread out over half the house, getting everything ready to go.
I'm glad I went to town because I feel more normal now and much less of an invalid which is exactly how I need to feel on the eve of my husband leaving. Neither one of us needs for me to be all pathetic and sad. And I feel pretty fine. If things go as they have been, I won't be good for anything tomorrow but that's okay. There's nothing I need to do. Not really.
I'm sorry I haven't been taking any pictures but I guess I've been a little too inwardly self-focused the past few days. I'll try to do better tomorrow.
Well, speaking of pictures, here's one that I did not take. 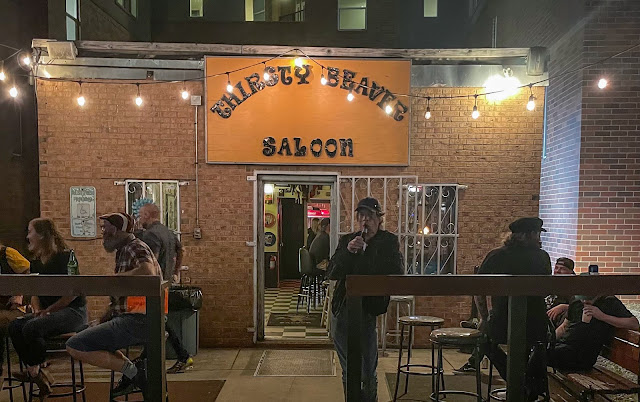 That's Mick on Wednesday night, having a beer by himself at what is being referred to in all the media as a "dive bar" named the Thirsty Beaver Saloon. Supposedly no one in the bar recognized him which could possibly happen. I do not think that the bar had any pre-warning that Sir Mick was going to show up. The bar owner says, "Absolutely not. He was in here and then he was gone."
Whatever. It's a very cool photo.
I have no tidy ending tonight so I'll just say as I do every week- Happy Friday, y'all.
Love...Ms. Moon
Posted by Ms. Moon at 6:09 PM