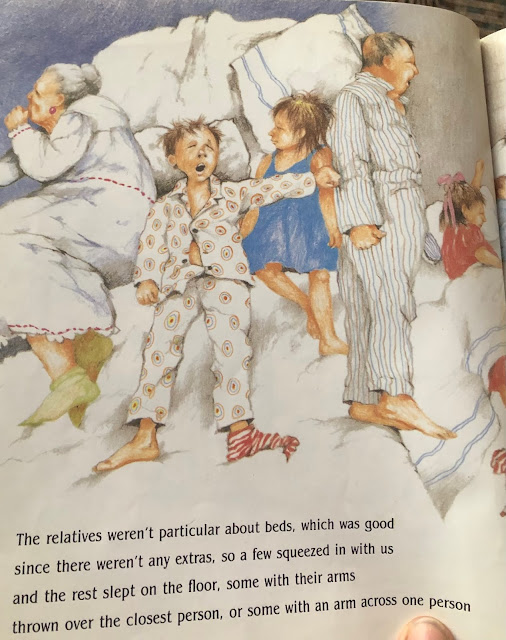 This is what I kept thinking of last night when Levon had a small accident around two and needed dry clothes and a dry place to sleep so I brought him into bed with us after I'd changed him out of his pajamas. Instead of that little boy and little girl there in the bed above, there was only one small boy and a very fat cat between Mr. Moon and me but somehow, that's exactly how it felt.
We got some sleep. Then around six, the small boy decided that it was time to wake up and he did try his best to be quiet until I told him that it was truly time but it wasn't long before his brother on his fold-out bed started whistling and rustling about and then came and got in bed too. He and Levon hugged as if they'd not seen each other since before the war and it was about that time that Mr. Moon quit trying to pretend he was still asleep and took those boys out to watch TV while he dozed in his chair and I dropped back into sleep like a rock into a well.

By the time I actually got up and got breakfast made, it was ten o'clock and the boys shoveled in pancakes with alarming joy.
"How do you like your pancakes?" I asked them.
"P is for Perfect," said August.
"Good," said Levon.
"G is for Good," said August.
"S is for smart," said MerMer.

Last night had gone so smoothly. So easily. I texted Jessie when they were asleep that they'd been as good as gold. And they had been! They ate their chicken and dumplings and their purple cows. 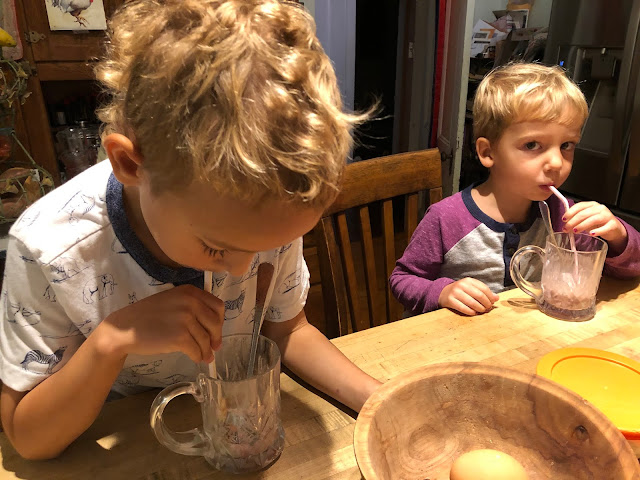 Then bath time and no water got sloshed over the edge to flood the floor. 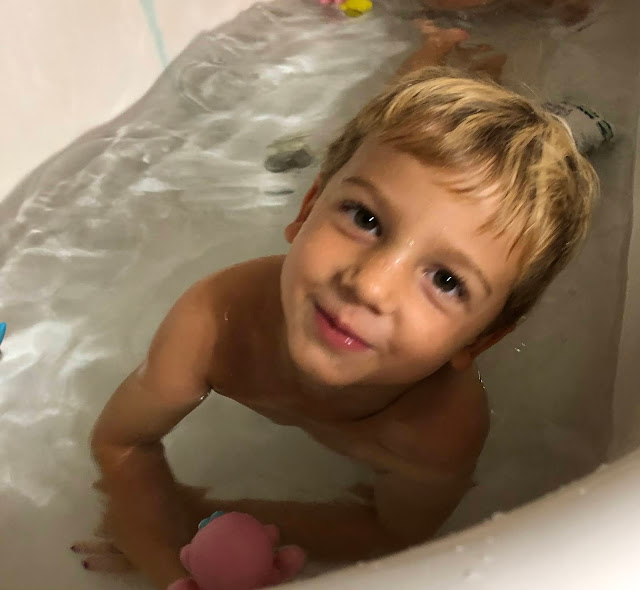 Sorry that's not quite in focus but isn't he precious?
Pajamas were gotten on and we settled down on our bed to read Professor Wormbog and then Levon's choice- The Three Billy Goats Gruff and another story from a book with monsters and trolls in it. He has lately taken to this book and I'm not sure why. The monsters and trolls are rather hideous but they bring him delight.
And then it was into their beds with cozy blankets and BOOM! they were asleep and I stayed awake too long (as it turned out) reading a book I'm reading about the intentional community in India called Auroville. "Better to Have Gone: Love, Death, and the Quest for Utopia in Auroville."
Rather strange book. The deal is, is that both the author and his wife were raised in Auroville and have now returned there to live as adults with their two sons. The place has many of the earmarks of a cult including a charismatic founding leader called "The Mother." I heard an interview with the author on NPR and you know me- tell me a good cult story and I'm a happy girl.
So when Levon woke me up, I'd only been asleep a few hours and today I have been rather exhausted, I must say. But you know- there are far worse reasons to be exhausted than having been cuddled up with a grandchild. I probably kept HIM awake part of the night, kissing his head and tenderly and so very softly tracing his tiny hand with my own old, rough fingers. In the dark, dark part of the night that hand seemed more than miraculous to me. Still a fraction of the size of an adult hand, still so new, really, with all of its nails and knuckles, it's fingertip whirls, its brilliant ability to grasp and pluck and squeeze and hold.
So- you know. It was a little frustrating not being able to get good sleep but it was rather lovely, too.
So that's how it went last night and today had some book-reading and necklace and bracelet making and game playing. The regular stuff. It's Halloween and when they left with their mama, August told me that I did not need to give them a going-away treat because they were going to get lots of candy tonight.
"Save me some," I said.
"Well...we eat it pretty fast," said August.
And I took a nap this afternoon so no blood, no foul as my husband, the former jock, says.
I haven't started getting Trick or Treat pictures yet but I did get this nice shot of Hank stabbing a pumpkin while watching Rocky Horror Picture Show with his love. 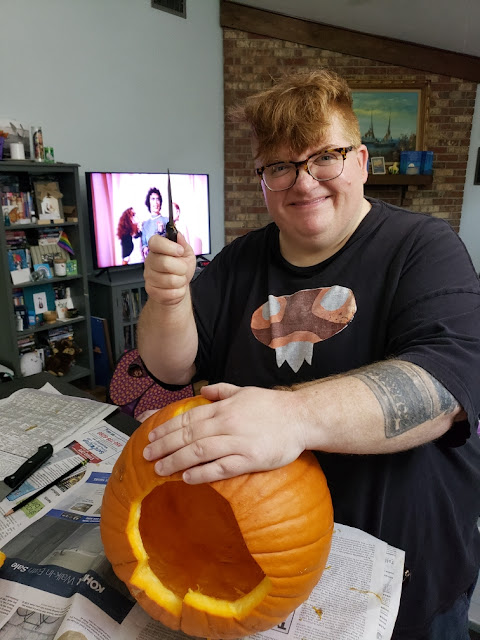 I have not carved a pumpkin in years. I really should though. There is nothing in the world so evocative as the smell of a pumpkin, freshly cut into, and then set to glow with a candle in it. If I did carve a pumpkin, it would be for the pure pleasure of it.
Okay. The pictures are starting to roll in. Here's some of the Weatherfords. 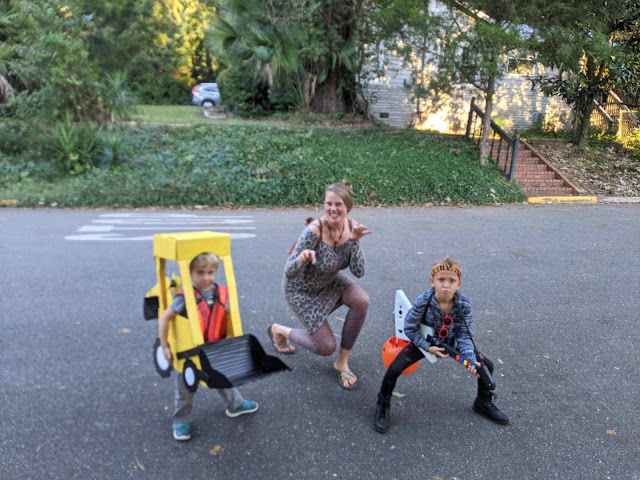 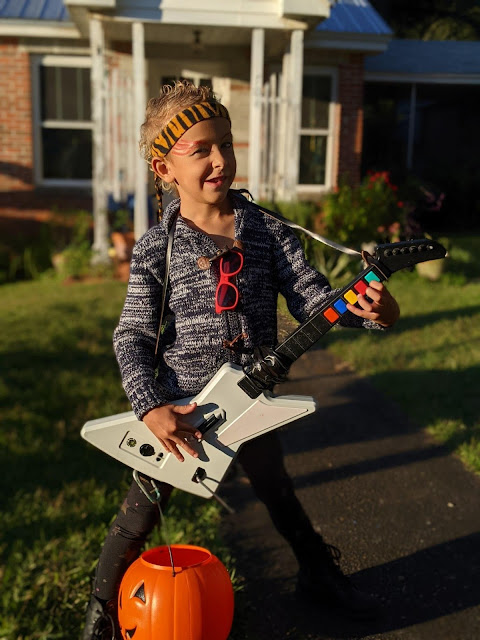 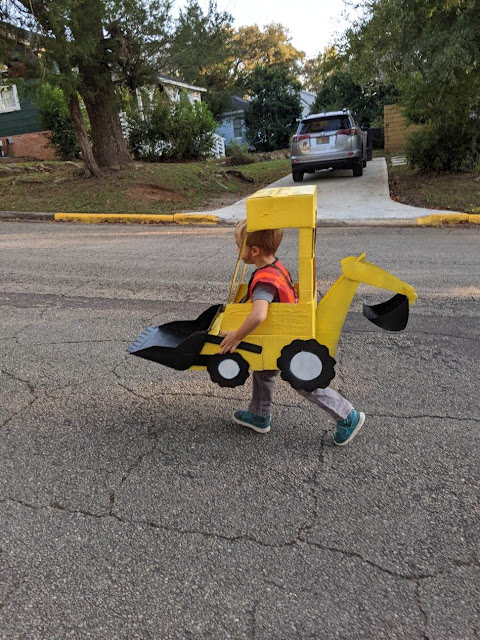 Jessie spent hours and hours on that backhoe. It's all made of boxes. And August makes a very fine rock star. I do believe he's feeling it.
And now the communication between my phone and my MacBook is being wonky. Halloween weirdness? Who knows? So I'll have to post any other pictures I get tomorrow.
Y'all be safe and watch out for razor blades in those apples and make sure that your gummy worms don't have any THC in them! I hear that's the big threat this year.
Who in the world would give away their edibles?
Not anyone I know.
Happy Halloween.
Love...Ms. Moon
Posted by Ms. Moon at 6:42 PM