The Only Sunday Blues Today Was The Shade Of The Sky 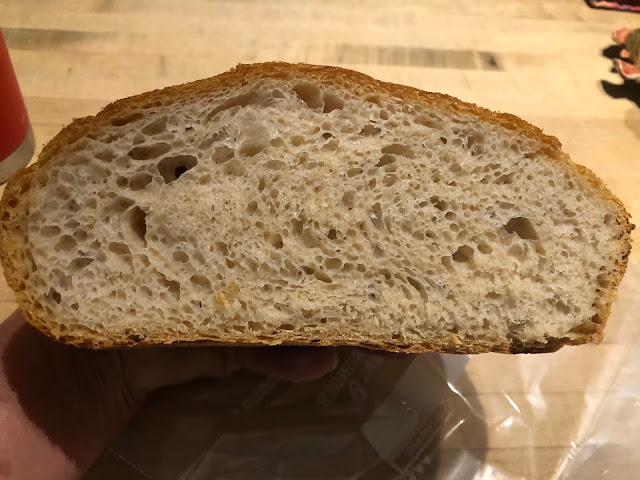 Although my bread did not get as high and mighty as I had hoped, it still had a lovely crumb, as Paul Hollywood says on The British Baking Show. Plenty of nice airy little holes and the crust is good and crusty but not inedible as so many "artisan" bakers seem to be believe it should be. The video I watched even mentioned the "char" at the bottom as adding extra flavor and I was like, "Uh, that's burned, baby. Char as in charcoal."
But you know, each to his or her own.

The Big News today was that when I woke up, it was in the fifties which practically shouts "Goodwill cashmere!" around here. We're not really that delicate but it was sincerely a shock. I had to change clothes! I'd put on my regulation T-shirt and overall shorts and exchanged those for a long-sleeved T-shirt with the turquoise flannel dress I made last year (the year before?) over it. And I've been comfortable all day long. It's such a glorious relief when the heat breaks and the humidity goes down. And it's been as bright and blue as a Norwegian saint's eyes today. So that has all done a good job of hacking away at the Sunday curtain of gray despair that usually falls and I have felt good. Good enough that I didn't feel as if I had to do a damn thing I didn't want to. Funny how that works. We opened up the hallway doors to the outside and let the air and light flood the house and the air conditioner is not heard in the land.
Or anywhere else.
I did have to deal with my airpods because the left one was not working and I'm sorry (not sorry) but if I can't listen to an audio book or a podcast while I'm going about my day, I'd just as soon go back to bed. I do realize that this isn't exactly healthy but it's how I live my life these days. So I struggled along with only one airpod in, listening to mono audio while I made us some poached eggs on sourdough and then I tried to figure out how to get my other pod working and I won't go into details but I will say that I ended up calling Apple again and also again, was instructed to do a system update which took half the day and then I used a little brush to clean out the charging case and something worked because now I'm back in stereo.

I swept and tidied my front porch because now we can sit on it without dying of the heat and also because it needed sweeping and tidying very badly and it brought me happiness to make it pretty again. 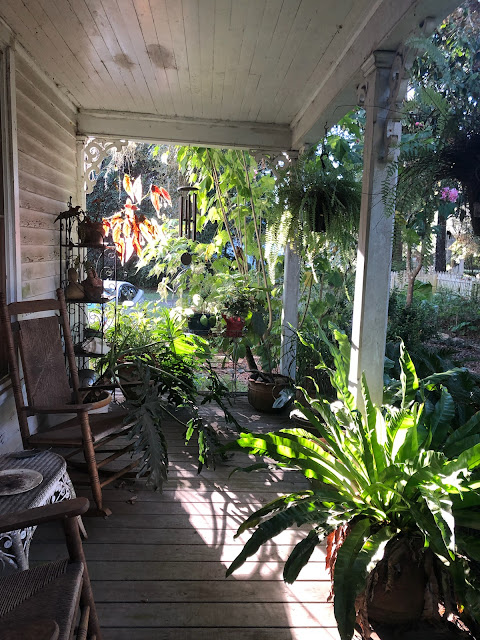 Now isn't that nice?
While I was piddling around doing not much of anything, Mr. Moon was back out in the garden. Talk about nice. It looks so beautiful! I took this picture of one his rows with his handprints in it where he patted down the kale and chard seeds. 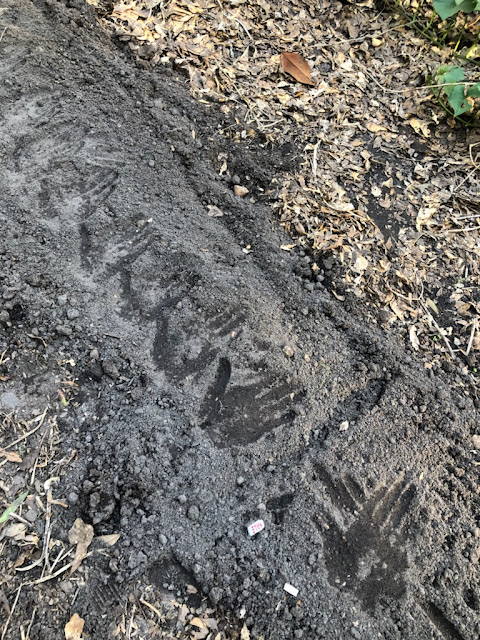 He's such an intentional planter.
I think I'm going to have to get in there and plant more arugula in a few weeks because that is my favorite green.
Now he's at the house of one of the guys he went hunting with and I think they are making duck sausage.
Do not ask me. I do not know. But talk about artisanal!
Jessie says that the hens woke up excited and ready to explore their new surroundings which in this case meant that they flew over a fence and explored their neighbors' yards. Fancy Pants seemed very happy but could not get over the fence and so he was alone again.
Naturally.
Poor little man.
They're going to keep the chickens in the coop for a few days to get them used to where home is. Meanwhile, Vergil and Mr. Moon got the rooster sons of Darla shut up in the coop this morning and Jessie's coming out this evening to try and catch them to take home for what we call "processing." I am pretty happy and excited myself at the thought of only having fifteen chickens instead of twenty-one. Perhaps I can now finally name them all. I do not like having so many that I don't feel a connection with all of them. And now Liberace will be the one and only rooster which will be a huge relief to him and an even greater relief to the sister-wives.
Plus- less poop.
So it's all pretty good today. I'm making pizzas tonight. Tomorrow Lily is bringing the Hartmann Trio over for me to watch for a few hours because she's working and it's a teacher planning day or something. I'm looking forward to that and it will be nice to have pizza for them to eat. I'm also looking forward to sleeping with the windows open. It's not quite time to un-bag the duck yet but soon maybe.
Soon.
Meanwhile, here we are and I am grateful.
Love...Ms. Moon
Posted by Ms. Moon at 6:23 PM