Chickens, Chicken, And More Chickeny Stuff. aka, My Life 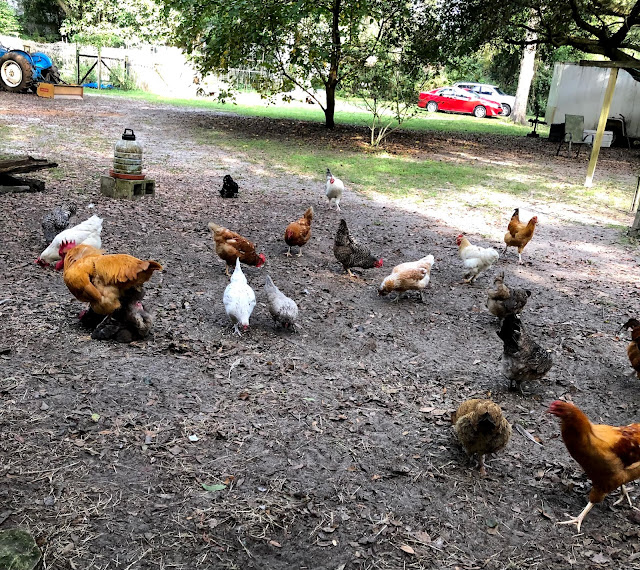 When I let the chickens out this morning and they were eating the corn scratch I'd thrown them, I was once again a bit shocked at how many birds I have right now. And that is not all of them. Too many, really. Jessie is down to one hen and she might take a few chickens from me, perhaps including Fancy Pants or Fancy Pants, Jr. Since she lives in a neighborhood in Tallahassee, she really doesn't want a bit ol' honking, crowing rooster and one of those two banties might just fit the bill. We shall see.

I've had a fairly busy day. Last night Lily and I texted each other about perhaps taking the kids to the Hilltop for lunch today and we did that. The Hilltop is such a trip. You just never know who you'll see there. Families, sheriffs, construction workers (although not generally on a Sunday), neighbors, people from town out on a drive looking for that real rural experience. And as I always say- just think of something you might want to eat and they're almost sure to have it. Gibson got a buffalo chicken tenders sandwich. Owen got a shrimp po'boy. Maggie got chicken tenders. Lily got a chicken philly cheese steak sandwich. I got a chicken-salad sub. I only got a half of one and couldn't eat it all. We could have had anything from barbecue to fried fish to any sort of sub in the world to salads to a Cuban sandwich to a Reuben. We ate outside on the picnic tables under shelter. A man, and I suppose his mother, were there, she making afghan squares and he doing other things (I guess they'd already eaten) including setting a fly trap.
Don't ask because I do not know.

Anyway, it was fun. I hadn't seen Gibson or Magnolia in forever and Maggie is chomping at the bit to come spend the night. It's her turn. I told her that when Boppy gets back she can come stay. "Will he be here tomorrow?" she asked.
Sweet child.
I forgot to take any pictures until they were about to leave from dropping me off. 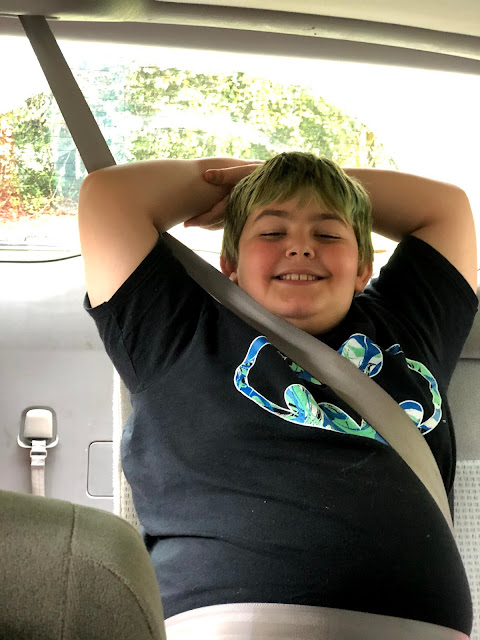 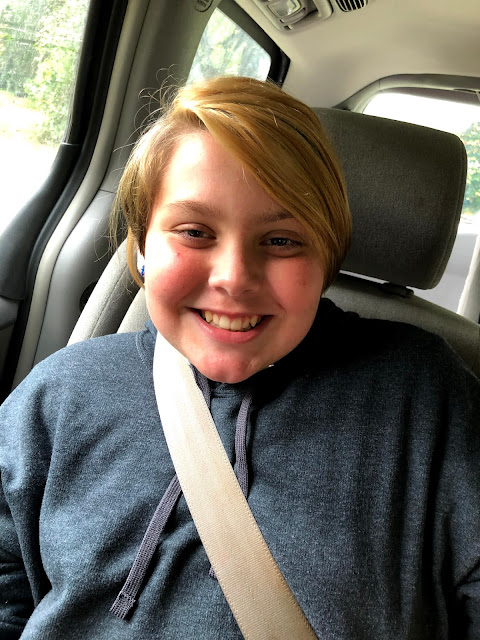 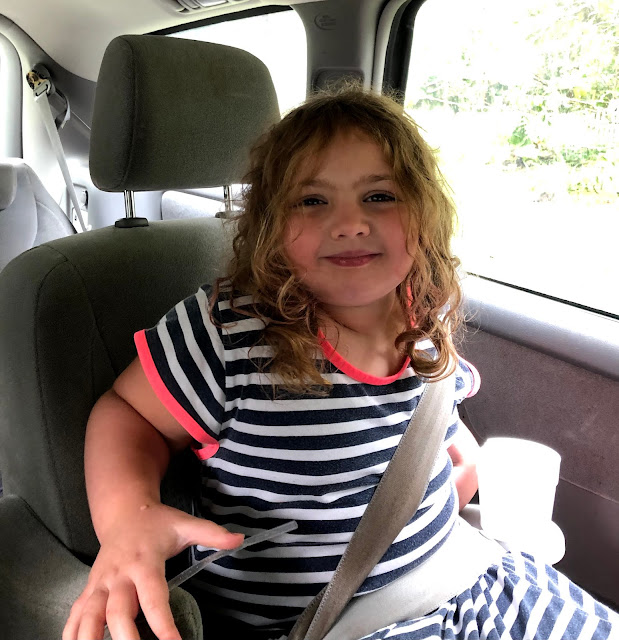 Gibson spent a good fifteen minutes telling us about a dream he'd had last night that he woke up crying from. It turns out that he was crying because in his dream he'd turned into a dragon and accidentally stepped on his mother when she was in a river (I think) and she'd washed away and drowned.
This would indeed make a boy cry.
He kept saying, "I'm a very creative person."
He really is and always has been.
After I got home I had to take a few things to town to hand them off to another guy who's going hunting with Mr. Moon who had forgotten these things. Important things. The guy is flying to the meeting place tomorrow so this was a big mission. I met him in the parking lot of the horrible, no-good, right-wing, tax-cheating, artifact-stealing, denying-their-female-employees-insurance-for-birth-control, fake Christian Hobby Lobby. I will never step foot in that place, just as I will never eat anything from Chik-Fil-A.
Fuck them.
Anyway, Hobby Lobby was closed because...Sunday, just as Chik-Fil-A is. 'Cause you know- the Sabbath and all. I gave Mr. Moon's friend the necessary stuff and then went to the CVS in the same strip mall where I had a fantastic time looking at pens and paper. I bought two black pens and a set of colored pens because that just seemed like the thing I needed to do. I can now make my grocery lists with one color for things I need at Publix and a different color for things I need at Costco. How exciting is that?
I drove home and made a small amount of pie pastry which is going to be part of the individual-sized chicken potpies I am about to make. Talk about exciting! And yes, Le Sueur peas will definitely be involved.
To continue with the chicken theme, I finally cleaned out the hen house. What a mess! Why must chickens poop so much? You'd think we humans could have figured out a way to train these birds to only do it outside by now but we have not. It's been rather rainy here today and so the chooks have spent a lot of time on my kitchen porch and they poop there too. They like to hang out there on rainy days because it's covered and also, the kitchen door is where most of their treats come through. I have no idea how in the world I became an old woman who has a kitchen porch with chicken poop on it yet here we are.
Sigh.
So I'm listening to a horrible book. Why am I listening to it? I'll tell you why. It's set in Apalachicola. One of the books that I wrote (a long time ago) which actually got me an agent although she never sold the book, was set in Apalachicola and I'm having extremely child-like thoughts along the lines of "It's Not Fair! My book is better!" It's written by a "popular" author and it's all formulaic cliches. The entire premise of the damn thing is completely concocted, the dialogue is nothing that normal humans would ever say (especially in Apalachicola) and although I'm not very far in I am pretty sure I know where it's headed.
Ugh.
The author has been to Apalachicola. This I will admit. The Piggly Wiggly is mentioned. So I'm torturing myself with that.
Otherwise, I am not torturing myself at all. I am enjoying myself and feeling pretty good and plan on doing more. Tomorrow I think I will take a short walk and before the week is over, I want to have mopped my kitchen. Meanwhile, I'm doing little needlework projects and watching the sort of TV that my husband has no interest in and doing some reading and just...being.
It's nice.
Love...Ms. Moon
Posted by Ms. Moon at 6:41 PM