Celebrating The Then And The Now 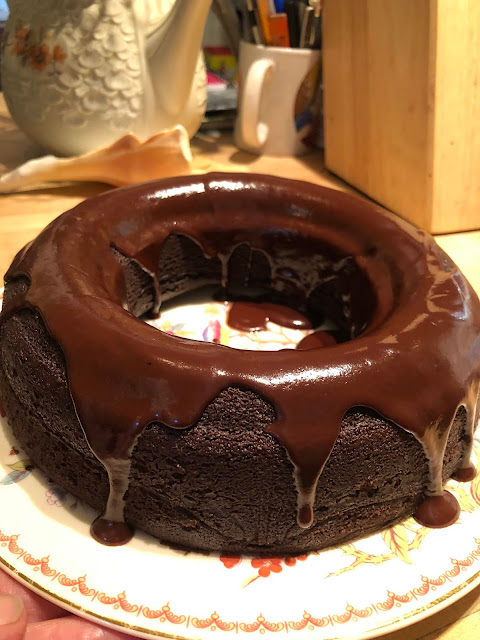 Tomorrow Glen and I will have been married for thirty-seven years. We had planned absolutely nothing but last night we booked a little last minute studio apartment on St. George, across the street from the beach. I think it will be sweet. It's only one room but has kitchen stuff and a porch and a patio and...a pool!
Just what you need on the beach, right?
Well, why not?
We did just spend that almost-week in Roseland last month (was it last month?) but it will be nice to commemorate the day we got married with a little trip to St. George where we can go to the beach and into Apalachicola to wander around and look at stuff too. Mr. Moon can fish and I can read.
So the small cake I made this afternoon is part of the celebration. It's a Mississippi Mud cake from a Moosewood cookbook and it is tried and it is true. It is a very nice cake. And as the recipe says- it travels well.
The sauce on it is not finished yet. It goes on in stages. It's supposed to be a glaze but I did not have whipping cream with which to make it and had to substitute 2% evaporated milk which was as close as I could come and I added more butter than called for to try and make up for the fat in heavy cream and it's not going to be a glaze at all but a sauce is good too. It has plenty of chocolate in it and isn't that the important part?

My lazy streak continued today. I just did not feel like going outside and working but my Puritan Grandfather's spirit kicked my ass a little and so I sighed and put on my overalls and shoes and spent about an hour pulling up Chinese rice paper plants and other invasives. It was hot and humid and I wore a mask to try and overcome the nasty dust that comes off the plants when you pull them. It causes an immediate reaction of sneezing and coughing and can't be good for us. The mask helped tremendously but working outside in the heat and humidity with a mask on is probably one of the menu items of activities in hell. Which is why I only did it for an hour.
Making a cake was a lot more fun.

Someone posted a video on FB today that I had never seen before. It was of Billy Preston playing with the Rolling Stones in 1975 and I have to say it is one of the weirdest things I have ever seen. Not only does Billy push Mick's gender fluidity to the outer limits, Mick also...
Well. Just watch it. If you want to. If not, I understand. Please don't ever feel guilty not watching a video I post.

The clip reminded me of what Keith Richards wrote in his book Life about Billy Preston which has stuck with me. I got the book out and found this:
Billy produced a different sound for us. If you listen to the records with Billy Preston, like "Melody," he fit perfectly. But all the way through a show with Billy, it was like playing with somebody who was going to put his own stamp on everything. He was used to being a star in his own right. There was one time in Glasgow when he was playing so loud he was drowning out the rest of the band. I took him backstage and showed him the blade. "You know what this is, Bill? Dear William. If you don't turn that fucking thing down right now, you're going to feel it. It's not Billy Preston and the Rolling Stones. You are the keyboard player with the Rolling Stones." But most of the time I never had a problem with it. Certainly Charlie quite enjoyed the jazz influence, and we did a lot of good stuff together.

He goes on to talk about Billy dying young and how he'd had "all the talent in the world." Also how he'd started playing so very young and had been gay when you couldn't be openly gay which only made his life harder.
So I remembered all of this when I saw the video and had to laugh at the way Billy was definitely putting his own stamp on everything that night. And although he did a lot of good work with the Beatles, I can almost guarantee you that there is no existing video of him dancing hand-in-hand with Paul McCartney or George Harrison. Perhaps John though...
I am completely cognizant of the fact that most people really have no interest in such esoteric rock and roll history but it's fascinating to me.
I wonder if I'll be posting tomorrow. Maybe. Maybe not. And if I don't, you'll know that I'm fine and at the beautiful beach with my darling sweetheart. As the little apartment is only one room, as I said, I hope that by Thursday when we come home, he is still my darling sweetheart.
Most likely he will be.
Until then or whenever...
Love...Ms. Moon
Posted by Ms. Moon at 6:20 PM