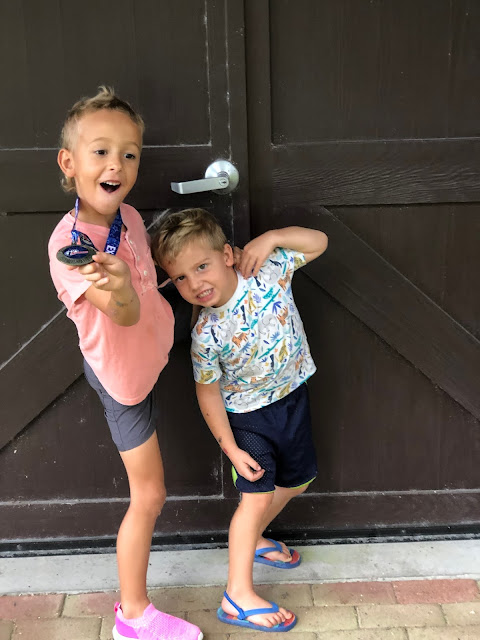 The brudders were back for a visit today. I was glad to see them. And their mama. Those boys make me laugh and their mama makes my heart happy. We had another leftover buffet for lunch. Jessie brought me some of the curry she made last night and it was good. She ate my leftover shrimp and orzo.

We took a little walk down to the post office where we saw our across-the-street neighbors. The man's name is Paul and August noted that Paul rhymes with all while Levon pointed out that it's like Paw Patrol.
Pretty much.
I made them pose by the door in the side of the old train station where our post office is although my love for that door has faded tremendously since they painted it brown over the red that it was. Why on earth would they replace a red door with a brown one?
Can I just say that white people tend to be frightened of color? Yes, I know that's a stereotype but in my sixty-seven years on this planet I have found it to be horrifyingly true in most instances. There are a few crazy people of no color (except beige) who do break out of the mold but most of them live by the coast. There is something about the sea that inspires the use of brighter colors, I think. One of the many things I love about Mexico so much is their absolute fearlessness when it comes to painting their houses every color of the rainbow and then some.
Okay. Where was I?
Oh yes. Posing in front of the door at the train station post office.
The brown door.

Again we read a few books. And we also played a game. 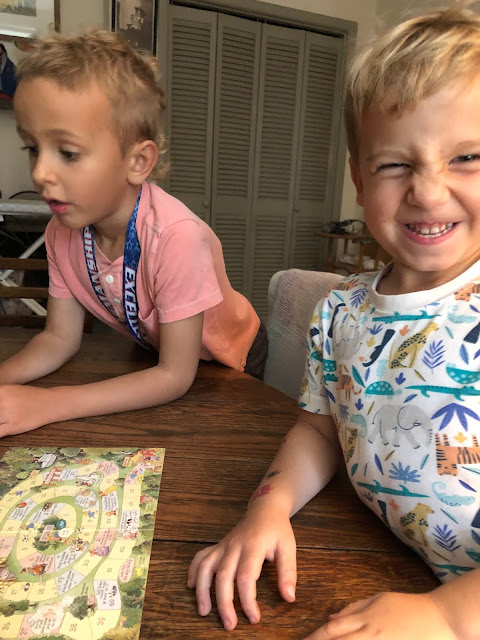 It's a teeny-tiny little game that came folded up in The Jolly Postman. 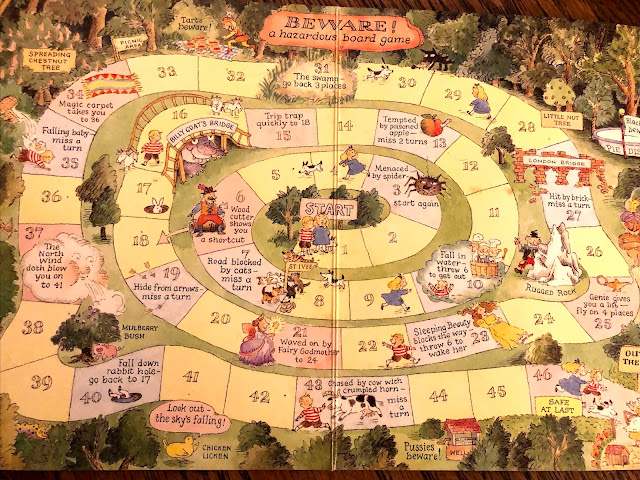 August has been wanting to play it forever and today we finally did. "You need dice," he advised me, so I fished one out of the Monopoly game. Levon and I were on one team and Jessie and August on the other. We used a bead and a button to mark our respective progress.
Levon, who was perhaps needing a nap, rolled the die with great and enthusiastic vigor. It rarely landed on the table.
Oh well. The boys would dash to find it on the floor under a bookshelf or behind a chair and would announce what the number on it was and our bead would be moved the appropriate spaces. No need to worry about such a piddling transgression of the rules of game play.
Team Jessie August won one game and Team Levon MerMer won another.
And that was enough of that. I about needed a magnifying glass to read what was on the squares. But it was fun.
And that was most of another day for me. I think I'll make the pepper jelly tomorrow and on Saturday, Hank and Rachel are coming out for shrimp salad. Instead of spending my days alone, I think I've seen family on most of the days Mr. Moon has been gone. Which is nice. No chance to be lonely for me. I know that many grandparents live thousands of miles away from their children and grandchilden and I can't really imagine how I could deal with that. I am quite thankful that I do not have to know.
Still, I have very much enjoyed my alone-time. The chickens and the cats keep any loneliness at bay. I have books and TV, podcasts and the internet.
I am still listening to this damn book set in Apalachicola. I cannot figure it out. Whenever the author mentions a place in the book by name (and she does this frequently) she usually gives the address. And it sounds ridiculous. Like, "And then we can drop off Becky for her tennis lessons at the Municipal courts on the corner of Sixth Avenue and E. Street."
WHAT?
Okay. That wasn't a direct quote. I can't remember the exact address and as far as I know there are no municipal tennis courts in Apalachicola and if there are, I have no idea where they are but what I'm saying is that the speaker in that example is from out of town but he is talking to someone who grew up in Apalachicola.
Awkward maybe?
"Let's hurry so that I can see Paco and pet him at the art gallery on the corner of Eighth Avenue and Market Street!"
For Christ's sake! Is the author being paid by the Apalachicola Chamber of Commerce? She must be. And by the way, the book is Flight Patterns by Karen White.
Don't bother. Just don't.
And having said all of that, I do not really have the right to judge either the author or the book in that at least she wrote a book that got published. Along with many, many others.
Still.
Jesus.
Mr. Moon is still alive and well. He is doing a lot of tromping through the woods and sleeping on a single bed mattress on the floor with pillows at the end for his feet. It's hard for him to find a bed that accommodates his length. Meanwhile, last night I had our king-sized bed entirely to myself for awhile as neither cat deigned to come to bed with me although Jack did join me in the deepest part of the night for a snuggle. I've been thinking that instead of washing the sheets tomorrow, I should just move over to the other side of the bed which has remained untouched since the man left.
Nah. Too weird.
I dare not roil the waters of normalcy and rightness. I must preserve the rituals and traditions, even when there is no one to observe them but me.
In this way I ensure his safe return.
Love...Ms. Moon
Posted by Ms. Moon at 6:45 PM