A Different Sort Of Life, Thank All The Lucky Stars 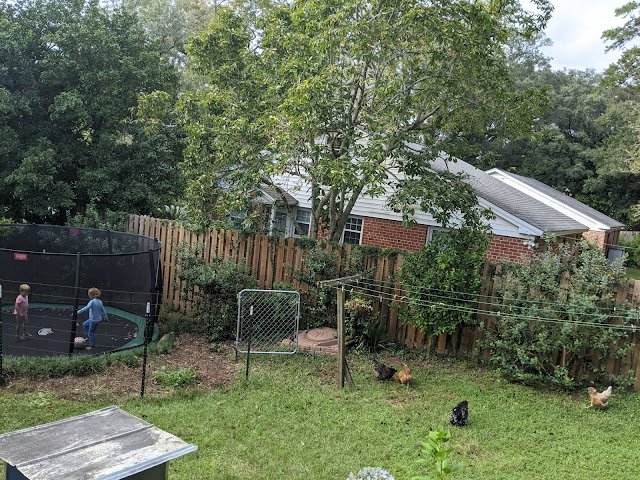 Jessie just sent me this picture of two boys and some chickens. It's what's happening in her backyard right now. Can you see Fancy Pants?

I had an immediate reaction to the photo and my eyes stung a little bit as my heart swelled. Such a prosaic picture of such a normal early evening. Two little boys jumping on a trampoline. There's a clothesline and a nice wooden fence, a few chickens scratching about for late dinner. I imagine Jessie is fixing their supper. It looks like the picture was taken from her kitchen window. And Vergil is probably finishing up whatever he's been working on today, about to start the evening shift with his wife of feeding those boys and getting them in the bathtub and in bed.
And despite the normalcy of this image and the situation, I can't help but be filled with a huge amount of gratitude for exactly that- the normalcy. I know that my grandchildren are being raised with so much love. All of them. And that their parents watch for their safety, they make sure that the children are fed well and have bedtimes and there are rules and they know that there are times to break the rules and  they are there for the children.

When I think of my own childhood, it is with such a sense of sadness. My mother tried. I know she did. But somehow there was just some sort of illness there that prevented her from being present as a mother, as a parent. And god knows my father, whom I did not see from the age of five until I was thirty, was no part of my life. Then of course, when I got a stepfather, he became the main source of fear and anxiety and anguish and all of the horrible things that children face when things are so very, very wrong in their homes which may look practically perfect from the outside but are malignant and rotten on the inside.

I've often said that I am living the life I never even dreamed of. And this is true. I have been blessed with so many opportunities in which I knew I needed to figure things out or I would lose these undreamed, unimaginable blessings. Things have definitely just fallen in my lap but I've had to work hard to recognize them, to cherish them, to simply not fuck them up and I have not always succeeded by any means.

But look- there are two of my grandsons, jumping on a trampoline, and as Jessie said in a text, "The boys have been playing so sweetly together this afternoon. It feels really lovely and right, just like you said."

Things get gnarly and hard for all of us at times. There is no enchanted life. There will be chicken poop in the grass and the kids might very well go wild at bath time and refuse to put their pajamas on.
But there is no monster hiding in the background. There is no mother threatening to kill herself. There is no deep abyss waiting to enfold those children in darkness.

And I guess that's what I wanted to say today.