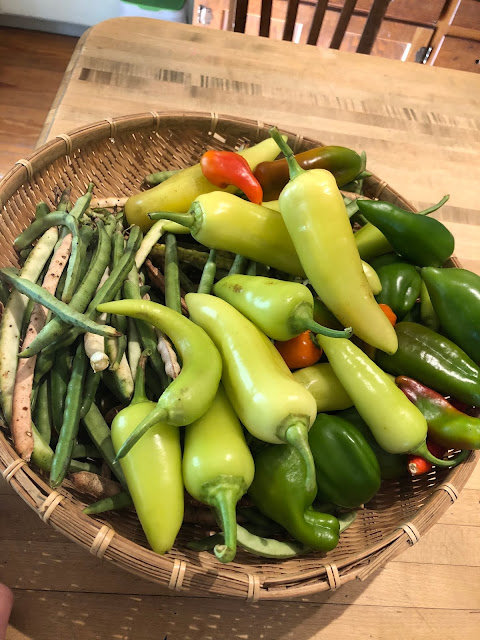 Well, sorry to have to say this but my advice about buttermilk-brined chicken is to save your buttermilk to make biscuits with. It was okay but it didn't rock my world. Sometimes the simplest things- like a roast chicken- should just be what they are in their simplest forms.
Take a chicken. Salt it. Put it in an iron skillet or other baking dish. Put it in a 425 degree oven and cook it until it's done.
You can do a lot of other fancy things to it but it's hard to improve on that.

I have not been feeling that well. I don't know what's wrong with me. I just haven't had any energy and part of me wonders if it's because I've just let myself stagnate. I haven't been taking my walks or really working outside, mostly because of the heat but then there was the appendectomy and the less I do, the less I want to do.
Big surprise there, eh?

So today I was determined to get outside and get some shit done. And I did. I picked all those peas and peppers you see and I weeded and pulled all the pea plants. I cleaned out maybe a quarter to a third of the garden but the rest of it isn't going to be that difficult. It's still hot and is going to be hotter the next two days but by Sunday it's supposed to cool down some.

I did laundry and hung it on the line, folded it when it was dry and brought it in and put it away.

I also swept and mopped the kitchen, pantry, and a bathroom which requires moving chairs and bins and baskets and so forth into the hallway so I can get underneath things.

And now I can hardly walk.
That was NOT that much work and don't try to convince me it was. I do, however, feel as if I've accomplished something for the first time in quite awhile. I have got to get moving more, and more regularly, too.

Mr. Moon went to town again to work on a contract so he's been gone most of the day. I hope that when he gets home he'll recognize the smell of Fabuloso and vinegar and realize that I haven't been sitting on my fat ass ALL day long. It was so much easier when he was gone to simply say, "Well, I'm on vacation too and I don't give a damn about the cleanliness of the kitchen floor." And it's not that he's ever ONCE in all of our years suggested that perhaps I should mop a floor, there's a part of me (the part marinated in guilt and shame my entire childhood) that remembers he grew up in a house with a mother who did very much care about the cleanliness of her house, along with two older sisters whose every Saturday was spent in ensuring that the house was indeed very, very clean.

Ah well. Obviously he's learned to accept the fact that his wife will always cook him good meals, make sure his clothes are cleaned and sometimes his shirts are ironed, and that the house is, well, at least tidy to a degree even if you wouldn't dare to eat off my floors.
Which leads me to ask- why would anyone want to eat off their floors?

Okay. Here's a picture of a Georgia Thumper, aka Eastern Lubber Grasshopper. 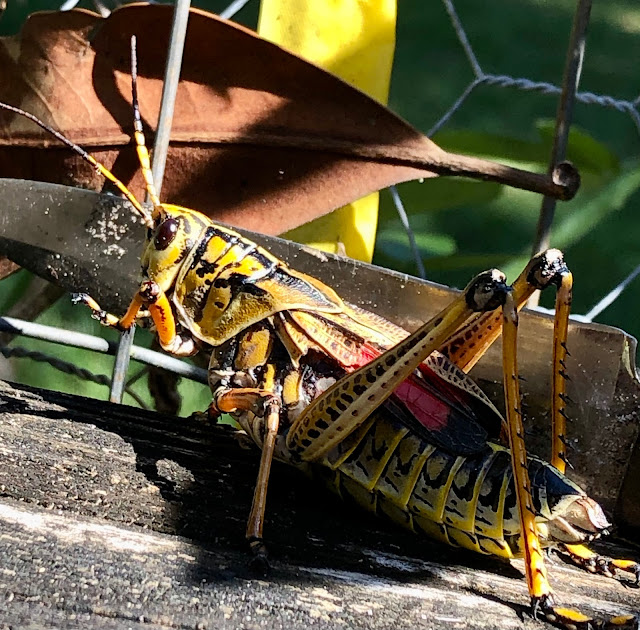 See the knife there in the background? I know I've posted pictures of these insects before but here's another just in case you missed those. These motherfuckers will tear UP a garden and a yard. They love ornamental foliage and your collard greens too. They are, as we say around here, a damn mess. The most zen, kind, loving woman I know will smash one of those monsters in a heartbeat when she finds them on her beloved plants. When I saw this one though, I just didn't have the energy or the heart to smush him. I should have though.
I remember the first time I saw one as a child and it scared the daylights out of me. All these years later they still sort of shock me with their size and alien-warrior armor.
I hope I can get out of bed in the morning. There is plenty more to do around here.
Love...Ms. Moon 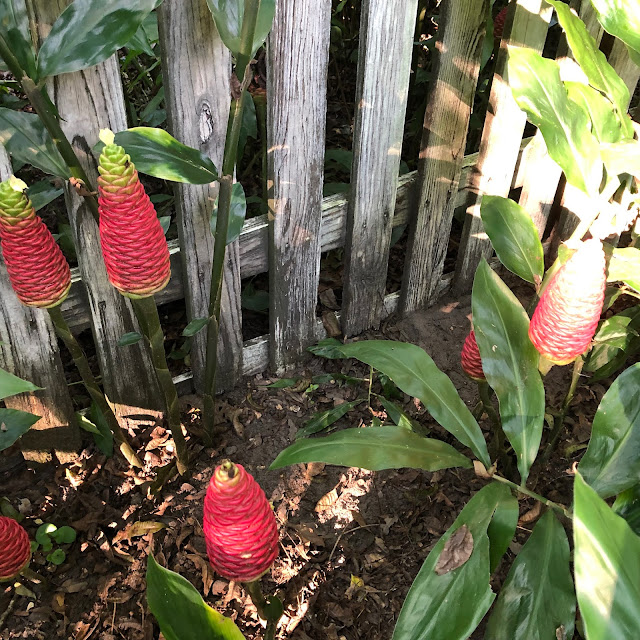