It's Good To Have Him Home 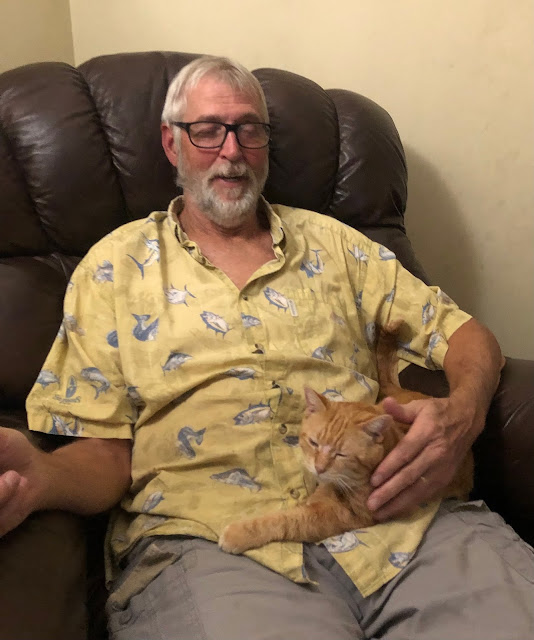 I'm not quite sure who was happier to see Mr. Moon pull up in the yard- me or Maurice.
Okay. I probably was. But Maurice was happy too. She would not leave the room he was in and as soon as he sat down, she jumped up on his lap and told him all about the things she'd done while he'd been away. It was actually quite charming and sweet. She only bit him a little bit. She was carried away with love, I'm sure.

He and I caught up with lots of hugs and no biting. He was exhausted but also somewhat exhilarated by the long, long two days of driving after his days of tromping around the woods in Canada. I made him a corn chowder with sourdough bread for his supper and I think he was very happy. Our lights were out by eleven and he slept a good, long sleep. I woke up several times, just to make sure he was there, right beside me, and he was.

This morning he started to unpack and get to the things he needed to do around here but when he heard that I was meeting Lily and Jessie and August and Levon for lunch he changed his plan and decided to do some of the chores he needed to do in town after eating with us. The boys and the mamas were happy to see Boppy and we ate outside at a barbecue place that was very good. And then the women and the little boys went to a local plant nursery where we walked around, both boys pulling carts even though the only things bought were two tiny plants and a bag of fertilizer. I made the boys pose by the dinosaur. 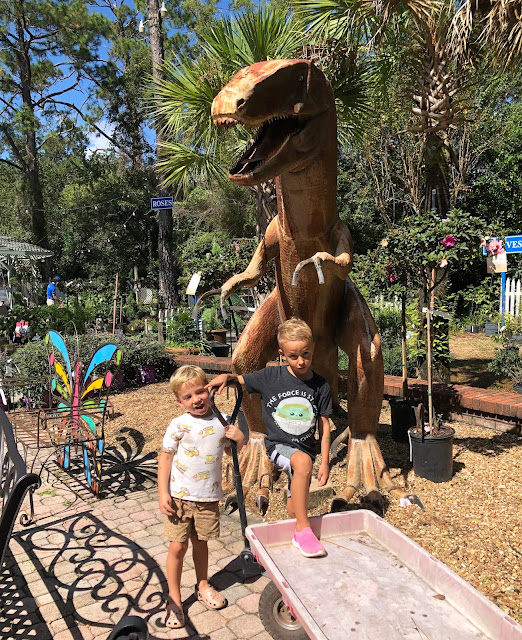 August is going back to school tomorrow which will be like another first day, I think. And Levon will be going to his school tomorrow too. What WILL Jessie find to do in that three hours that she will be child-free? I have a feeling she'll figure it out.

There's a greenhouse at this nursery which has the most beautiful indoor plants which make us all crazy with lust. There's also a little pond with koi in it and a bridge over it. Children, if they ask nicely, are given a little fish food to throw to the gorgeous fishes. 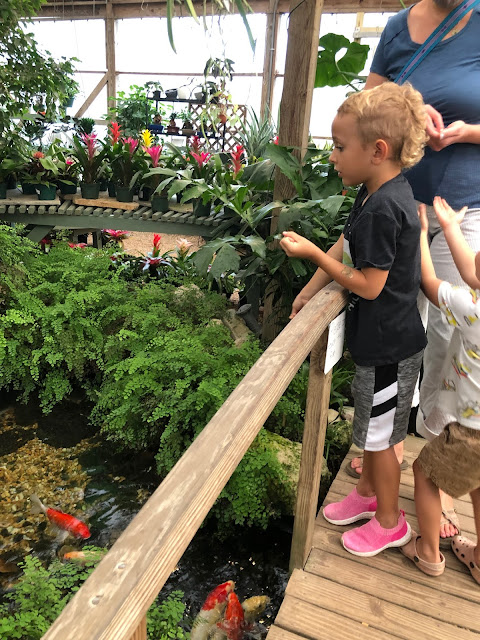 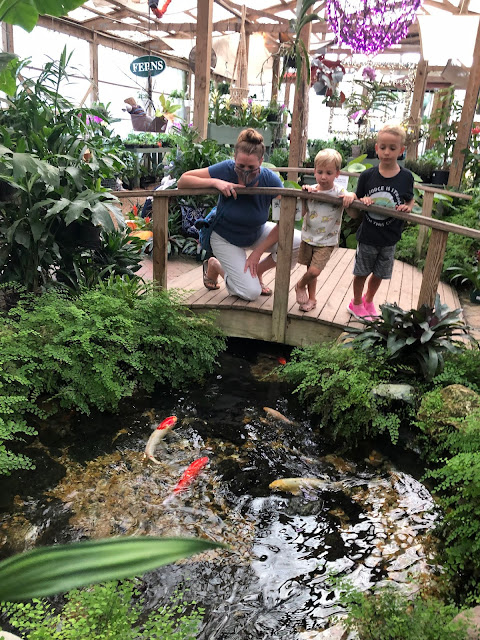 Such a pretty place.
And then I came home and finally cleaned the hen house and pulled the zinnias which is always a bit heartbreaking but it must be done, and a few weeds too.
And that was my day. I'm making a buttermilk-brined roast chicken tonight, a recipe from the NYT's adapted from Samin Nosrat's series, "Salt, Fat, Acid, Heat." I hear it was inspired by her observing how southern ladies soak their chicken in buttermilk overnight before frying it. I hope it's good.
May all be well with you and yours.
Love...Ms. Moon
Posted by Ms. Moon at 6:09 PM