My Eyeballs Are Healthy 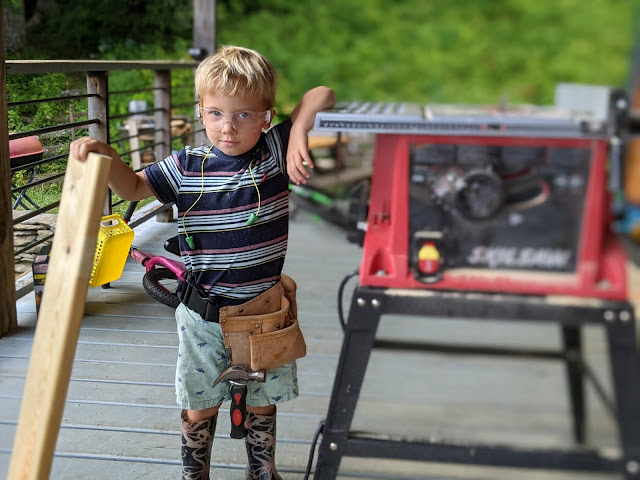 Jessie sent this picture in a group text this morning and I think it may be my favorite picture of Levon ever. Or at least one of them. He was ready to help his Uncle Ben do some work on the porch. The only thing I don't like about it is that he looks about two years older there than he did when he left here about a month ago.
Excuse me? Did anyone ask my permission for this to happen?
No. No they did not.

So. Saga of the eye exam.
It wasn't bad at all. And the terrific news is that my eyes showed nothing but good healthy eyeballishness. Blood vessels looked good. Retina fine. The macula appears normal. My mother had macular degeneration so I worry about that.
They did not have to dilate my eyes. For the low, low cost of $34.99 (or something like that) they can take a high-tech picture of the eye which shows them just about everything they need to know. The doctor did use a special lens to look all around the periphery of my pupils and again, all looked well.
Turns out that my eyesight problem is not that my vision has gotten worse. It's a problem I have with my eye muscles. They do not want to both focus in the same place which understandably, causes double vision at distance. This has been going on for years and the last doctor I went to figured that out and they included a prism something-something in the prescription to help resolve the issue which helped for a long time but lately it's been getting worse, making driving and watching TV across the room and things like dance recitals frustrating as hell because my poor eye muscles are trying like hell to work together to make the left and right eye's vision come together the way they should and they just can't.
Poor eye muscles.
So, the doctor made a change in my prescription and that should take care of that.
I was so relieved when it was all over that I practically offered to have a baby for her if she needed that service (she doesn't, she has two children already- I always NEED to know about the lives of the doctors). But then of course it was time to pick out frames and I went into that with an open heart and open mind but the young woman helping me annoyed me so much that I finally said that I'd be back, paid up, got my prescription and left.
I sort of liked one pair (although now I'm glad I didn't get them) and she almost wouldn't let me choose them saying, "When you put them on you didn't go Yes! I love these!"
"Honey," I said, "At this point in my life there is absolutely nothing that I am going to put on my face which is going to evoke that particular reaction."
She just looked at me like, "Duh. You're about a hundred years old."
And she kept suggesting the highest dollar frames and I understand that. That is how she makes her living. But fuck me- even the lower-priced ones were not cheap by a long shot.
Worst of all, I didn't have any of my children there to help me decide. Jessie has been doing that for me for years and years. Probably since she was about four which is when I started trusting her fashion-and-beauty advice. I tried sending her a few pictures but my reception there was terrible. And Mr. Moon had dropped me off and then gone to the office and wasn't back yet so I just couldn't do it alone.
Maybe one of the kids will go to Costco with me tomorrow. I'll see what they have. I know that you can order very fine frames online for a lot less money but I can't figure out how you can really know how you'll look in a pair of glasses without trying them on.
Anyway. That's my story.

When Mr. Moon picked me up it was almost two so we decided to go get lunch and we went to a very locally-owned place that serves seafood and he ordered a shrimp basket and I ordered a shrimp sandwich and for some reason it took them over forty minutes to get us our food and there were only two other occupied tables in the restaurant. The food was great but by the time we got it we were over the whole experience.
I hate it when that happens.

But all is well and I've picked some beans and tomatoes and I've got the bed made up with clean sheets and here are some chick pictures. 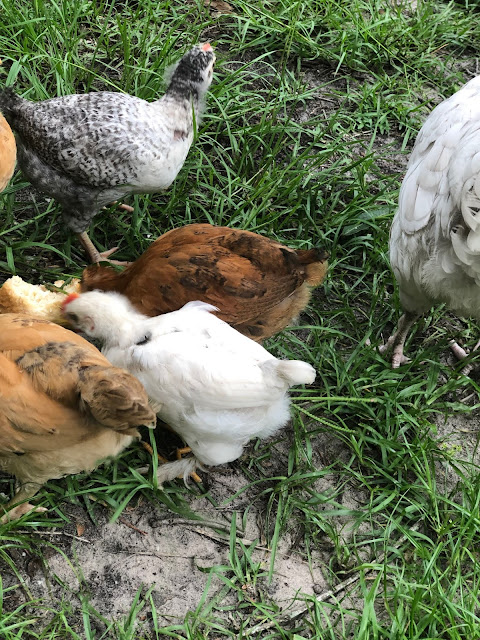 Look at all those little tail feathers growing in! 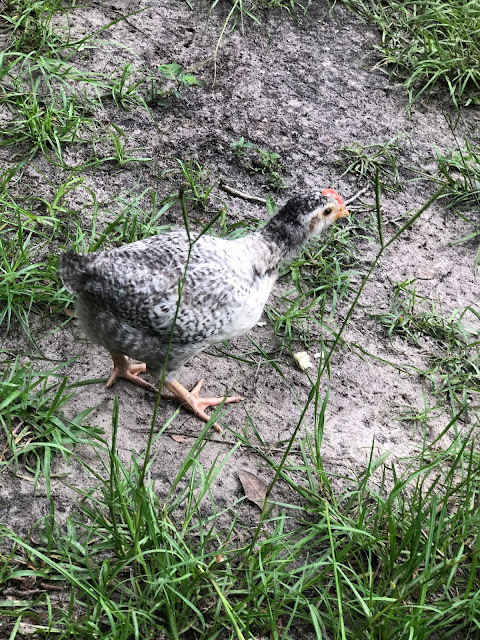 The possible barred rock baby. He/she has such a pleasant expression.

And later on in the day, Jessie sent another picture. 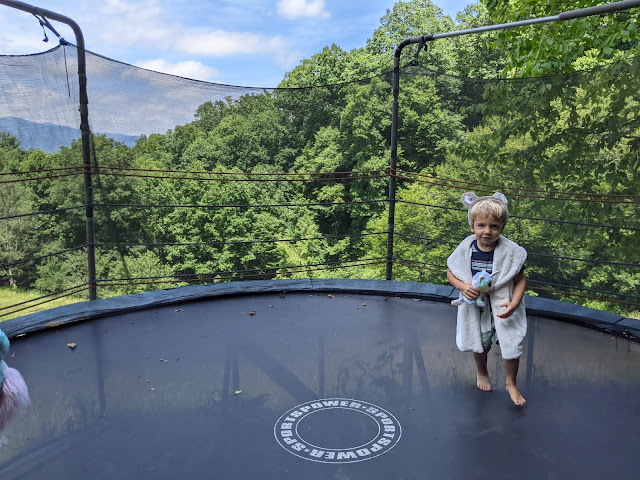 Carpenter Levon turned into Polar Bear Levon on the trampoline.
Ah! If only all of us could be so flexible in our life styles. What glory to be three years old and open to the entire human range of possible personalities and dreams!
Happy Friday, y'all.
Love...Ms. Moon