Half Of Summer Caught In Three Pint Jars 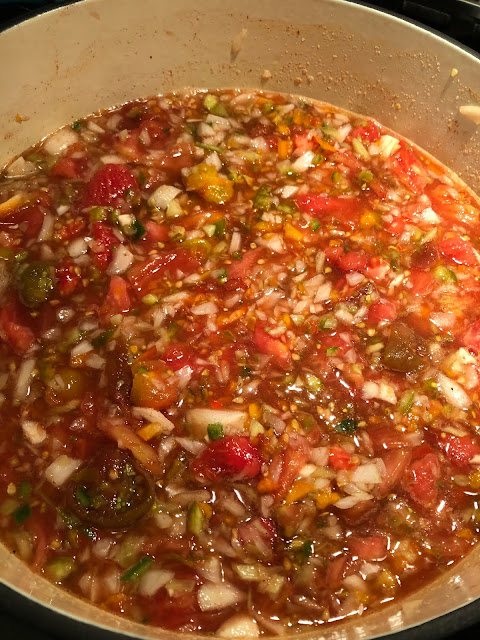 A few minutes ago the temperature dropped a little and great gallumphs of giant-boot thunder began to sound and now lightening is cracking and flashing to the south and the east of us. Leaves are stirring in a small, restless dance and the sun has closed its eyes to slits.

Come on, rain. Break this syrup-thick humidity, turn it into liquid that falls from the sky and cools the dirt.

I took a small walk this morning, less than forty-five minutes, and it was miserable. I know that it seems that the whole country is suffering right now and I know that our heat and humidity is not as bad as it is elsewhere but that doesn't make it feel any better here.

I spent most of the rest of the day in the kitchen, peeling and chopping tomatoes and cutting up onions and peppers and putting them in the food processor and then cooking all of that with vinegar, sugar, salt, spices. I started out with enough of the mixture to half-fill my biggest enameled cast-iron pot and simmered it down until this is what I got. 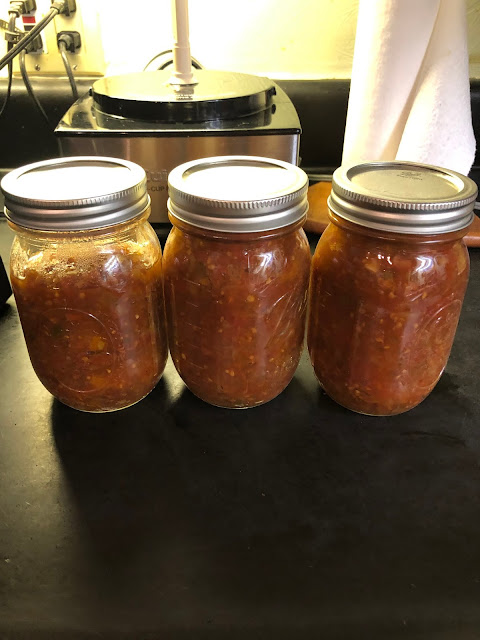 Not even three full pints of chili sauce.
Sigh.
It's good but I can't help but feel that this may have been a waste of my time, considering the results. And it's not just the chopping and cooking and peeling, it's the bowls and utensils I have to wash and the kitchen counters that, no matter how carefully I work, end up covered with juice and seeds.
I guess I need to look at as a way to preserve many of the tomatoes and peppers that we grow and that each of those jars holds an entire bounty of garden goodness.
Or something like that.

I also made cookies. Tomorrow is Mr. Moon's birthday and he doesn't want a party or even a lunch out and he doesn't want a cake. He just finished up the Father's Day dessert I made him and I think the idea of an entire cake is probably overwhelming. So I think we're going to go to the beach with Lily and her kids and we can take cookies for everyone to eat. He's spent all day today over at Lily's, mowing her vast yard and doing I-don't-know-what-all. She told me that she wouldn't let him get the leaves off her roof for which I am grateful.
It's raining now. A slow, gentle rhythm. Not enough to do a whole lot but it is cooler and the air feels more like air should, rather than something you need a snorkel to breathe. I just looked up to see one of Darla's kids at least thirty feet from her, pecking at seeds underneath the bird feeder. He was brave for a minute or two and then rushed back to be with mama and the rest of the siblings. It won't be long before they're all wandering off on their own. I will miss watching that little family flock wander about the yard. One of the barred rocks, either Annie or Alice, was missing a few nights ago in the roost but she showed up again the next day. I have no idea where she was but I'm glad she's back.
The mystery and wonder of chickens. The mystery and wonder of rain. The mystery and wonder and alchemy of making sauce from tomatoes. The mystery and wonder of watching a cat watching the rain come down. The mystery and wonder of loving someone so long and discovering that you love them more every year. Hell, every day.
The mystery and wonder of it all.
Love...Ms. Moon
Posted by Ms. Moon at 6:19 PM