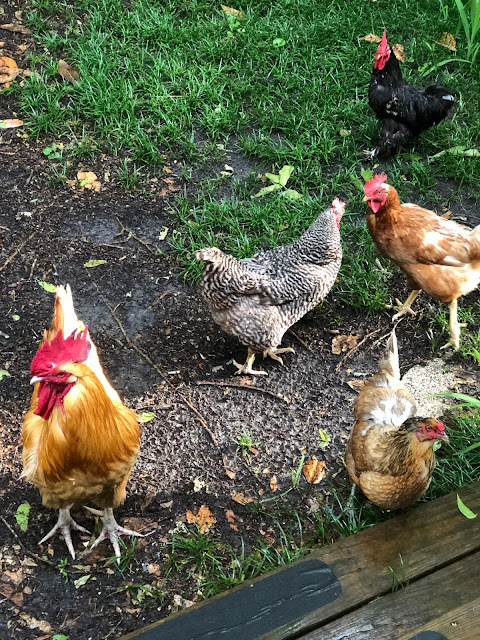 Yesterday evening after the rain stopped, the light was so beautiful and I went on a little picture-taking expedition. This one was really just right outside my back porch where the chickens had gathered in their pre-roost walk-around. Those are the same steps that I fell down last summer resulting in the broken ribs. You can see that Mr. Moon put skid-resistant strips on them but I am still very, very cautious when I go down them, no longer flying down them as if I was an indestructible dancer. 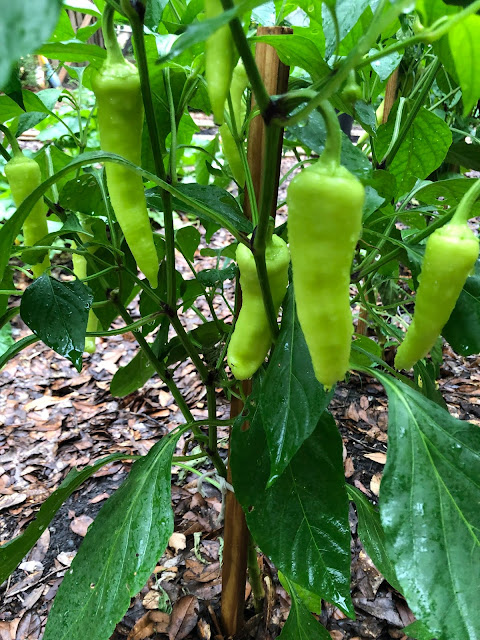 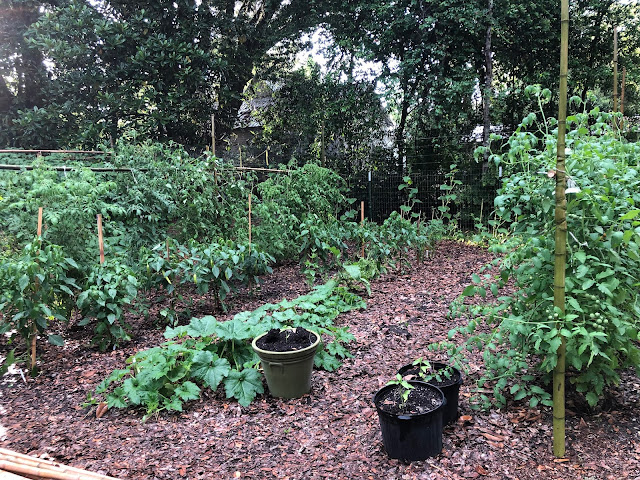 There's a part of the garden. You can see tomatoes, peppers, Delicata squash (I have big hopes for that), and more tomatoes. All of those to the right are the cherry tomatoes. On the back fence there are some cucumbers. 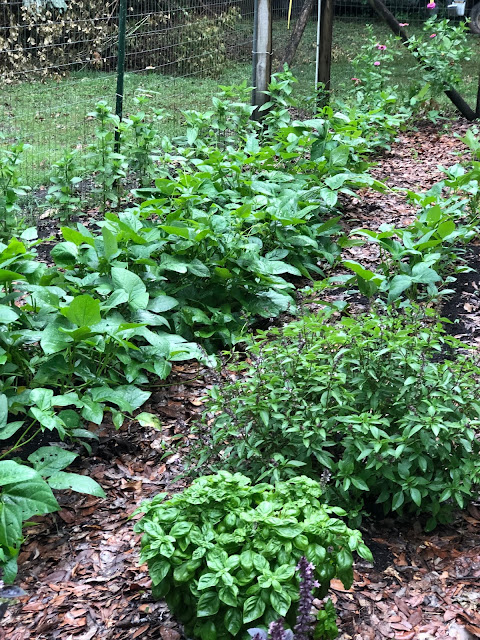 To the left are field peas of some sort, then two different types of basil and more peas. 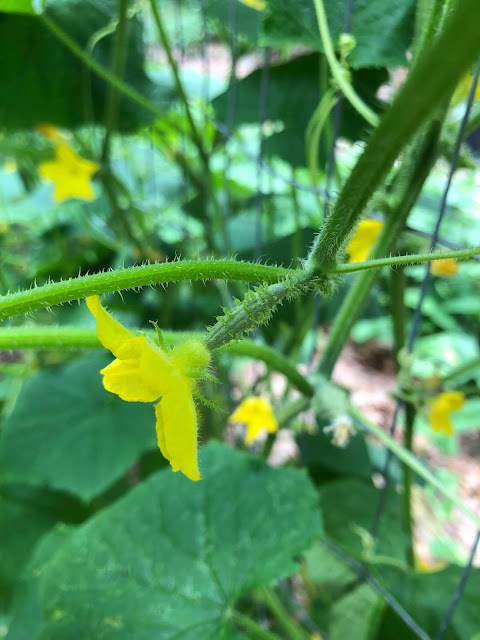 One of the first baby cucumbers. If we only get an actual cucumber from every fifth blossom, there still won't be enough canning jars in all of northwest Florida to hold the pickles I am going to theoretically make. This may be one of those years I attempt a batch of Glen's mother's sweet pickles which I always describe as having every molecule of cucumber replaced with sugar. Their preparation requires a vat and two weeks worth of alchemic magic.
As one would only imagine.
Today I've felt as if I've flopped onto the bed of despair and can't get up. I have no idea what's wrong with me. I've felt as unenergetic and old and sore as I did the other day after my hot walk. I slept late and then later laid down to read a New Yorker magazine and fell asleep. The bread I'd made up the dough for last night was in the oven and thank god I had set my phone timer for just that situation. If I had not, I would have overcooked it even more than I did. It is more a monolith of bread than it is a loaf and I would hate for it to be inedible. I made it with some leftover mashed potatoes and parmesan cheese and by this morning, my sourdough starter from the wild yeast of Lloyd had risen it prodigiously in the bowl.
We shall call it artisan once again, which insinuates that I meant to do that as dear Peewee Herman used to say. He may still say it but I haven't spoken with him lately.
Remember when I vowed to mop my kitchen floor today? Well, I did it. I swept twice and mopped twice. So there is that. It honestly does not look much different but it smells so nicely of white vinegar and Fabuloso. A few months ago I read something on Facebook about scrubbing the kitchen floor on hands and knees with a brush and I could not believe the number of women who responded that that was the only way to truly get your floor clean. I added my two cents to the conversation by saying, "Who needs their kitchen floor to be that clean? You're only going to walk on it."
I don't know. Perhaps some people (i.e. women, mostly) have taken kitchen floor surgery on friends and animals as a hobby.
Well, not me, baby. But for a few moments in time, my kitchen floor (and the floor of the adjoining bathroom and pantry) are relatively dirt free.
Mr. Moon was going to grill us some fish tonight but it has been raining again and everything is quite wet outside so I think I'll make some spaghetti to go with the bread. The rain was beautiful. I was picking beans and cherry tomatoes and banana peppers in the garden when the wind came up and began to whip the magnolia leaves into a rusty-sounding frenzy and I got into the house just before the skies let loose. Although the rain is always a joy to me, perhaps it is the weather change that has me feeling this old and sore and tired.
Who knows?
Not me.
Love...Ms. Moon
Posted by Ms. Moon at 6:01 PM