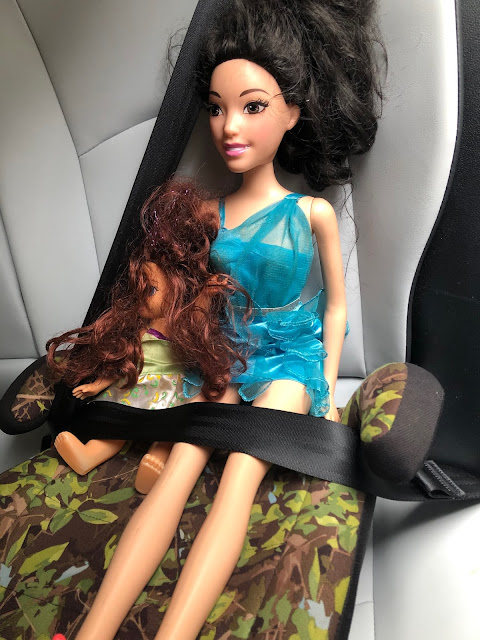 When you are a grandmother, sometimes you drive around doing your errands with a doll or two strapped into a camouflage child's seat in your car. This was the case for me today. I took Lily's car to her and traded it for my car and Maggie asked if I would mind driving her doll around. I said I would not mind at all and so she took the doll (Belle? Anna? Kim Kardashian?) out to my car and strapped her in. While I was getting bags out of the back of the car to do my shopping later, I found the other doll and put her safely next to the one Maggie had placed in the seat because- well, who wants to ride around in the hatchback?
I have been instructed to bring them in and put them with the other dolls in my house and when Maggie comes over on Sunday for Father's Day brunch, she can collect them.

If I had just gone to the two places today that I meant to go to which were of course Costco and Publix, I could have been done in an hour and a half. But I realized as I was driving in that I was very hungry and so I decided to go to a Mexican place in a little strip mall near Costco and since I had nothing to read while I ate, I went to the Goodwill bookstore next to it first. This worked out well and I spent at least a half hour in the bookstore which is a very fine Goodwill bookstore, well organized and tidy as can be, perusing fiction and history, memoir and biography, books about Florida and children's books. I want to be able to take some new books (to us) up to North Carolina and also to share with the other grands. I only ended up getting three but I think they will be enjoyed. One is about heavy machinery. I hope that Levon has not read it. I ended up buying myself a chick-lit sort of novel which will easy to read and entertaining, too. I started it while I ate my enchiladas.
Here's a funny thing- I was sitting there, feeling so old because I have been feeling so old recently and also because I am getting on up there in years (as in, if I died, people would not look at my age in my obituary and say, "Oh, and she was so young!) when a song came on the Muzak play list that I am almost certain was done by a band whose members I used to know. I wanted to grab the four-year old employee who was cleaning tables and say, "I know their guitar player!"
But I didn't.

That didn't actually make me feel any younger and what I did in Costco made me feel even older. I only had four things on my list and for once, I only got the things on my list and so that took me about five minutes and then I went to the self-check-out which I always seem to screw up in some way but today I was certain I had done it perfectly, zippity-doo-dah, off to the door to leave, when I realized I did not have my receipt and of course you cannot get out of Costco without your receipt so I had to wheel back to the self-check-out place where the attendant was holding my receipt as he helped someone else. He saw me, handed it to me, I said, "Thank-you!" and headed back to the door where I was allowed to leave seeing as I had proof that I'd paid for my groceries.

Nothing dramatic happened in Publix although I did have to backtrack a few times. I didn't even run into anyone I know which was a huge relief.

Got home, unloaded the car, put everything away, made up the bed with the sheets I'd washed and put in the dryer before I left, put the things I had in the washer into the dryer, made up a loaf of (not sourdough) bread and gave it firm instructions to rise, motherfucker!, checked on Darla and her chicks- all of them seem to be present and accounted for, collected eleven eggs, picked some basil and a handful of arugula for tonight's supper, and for some damn reason I'm far more exhausted this evening than I was any of the days I walked this week.

I will enjoy my martini tonight.

On the menu: squash soup and a sort of caprese  salad with chicken and bread.