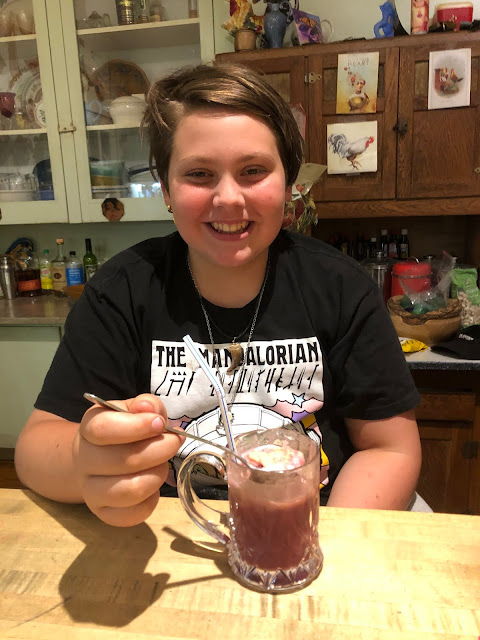 I wonder how many purple cow pictures I have posted over the years? I have no idea but here is one more.

Owen was so sweet. And so easy. We did not read The Little Red Hen Makes a Pizza but we did joke about it. He liked his chicken enchiladas and of course he took his own shower and then he watched some basketball with his Boppy and when he got tired, he went to bed and I kissed him goodnight and that was that. He did not wake us before dawn, he did not need to be comforted in the night, he did not complain of monsters or being thirsty. He just slept. And this morning he was quite happy with the leftover pancakes from Sunday.
It was another rainy day so we watched "My Octopus Teacher" again. We'd all seen it before but it was as terrific and magical the second time as it had been the first. And then Owen and I hung out on the porches, first the back porch where we watched the birds and the chickens and then the swing porch where we watched the rain and just talked. He is a talker and he is a listener, too. He listened to some of my stories and I thanked him before he left.
"Anytime!" he said. "Well, that I'm here."
We also played Battle, he and Mr. Moon and I. He won.

He's just a fine boy and a smart boy and I am so proud to be his grandmother.

The rain has made us lazy. Mr. Moon has done a little of this and of that and I have done even less. We spent some sweet time together and I was undone with love for him. It was as if some window had been opened in my soul and in my memory and suddenly I could see and feel the branch of the tree in Roseland that I used to perch on to read sometimes. An old cedar which is not there anymore but which I still dream of. I thought of Owen as a baby and I thought of myself as a child and wished I could remember being held by my mother. I do have one memory of her holding me but I was wracked with pain from an earache and so it is not a sweet memory. I could feel her worry and concern and somehow it seems as if I was already aware that causing her pain was something I did not ever want to do. As I remembered things I thought about how when we die, all of the memories we have die with us and how that renders everything we remember dead too. This is obvious, of course, but somehow I feel so emotional about that on this rainy day that has been so filled with love. Everyone has their own lives and their own memories, some of them so sharp and clear even after decades and decades that it would seem impossible that they will simply disappear. That there will be no trace of a little girl clutching a red Happy Hollisters book, walking down a dirt road towards the river and climbing up into the lap of a cedar tree, her heart filled with too much sorrow for anyone that young, the comfort of the book, the words, the pages, the grooved, dark bark of the branch, the spicy scent of the cedar, the funky smell of the river and the mangroves, the sounds of the birds, the blue of the sky, the peace of the place, the sense of the safety of being alone, all alone in a tree.

Here's another memory- whenever my grandfather carved a roast, he would always say the same words: Tender as a widow's heart.
"Oh, James," my grandmother would say.
And he would chuckle.
That's how my heart feels today- tender as a widow's heart even though my husband is right here, able to take me in his arms and let me cry a little if I need to, to kiss me and tell me he loves me.

Well. The frogs are singing and water that collected on leaves is dripping to the saturated ground. I am thinking now about how Owen asked me why I started planting things like gardens and trees. I told him that it seems like I just had to. He accepted that. We talked a lot about nature and how quickly and horribly humans are destroying it. We talked about the giant oak in my front yard and the little Buck-eye I planted. We talked about where birds go in the rain and also- where do they go during hurricanes?