A Big Day For Us 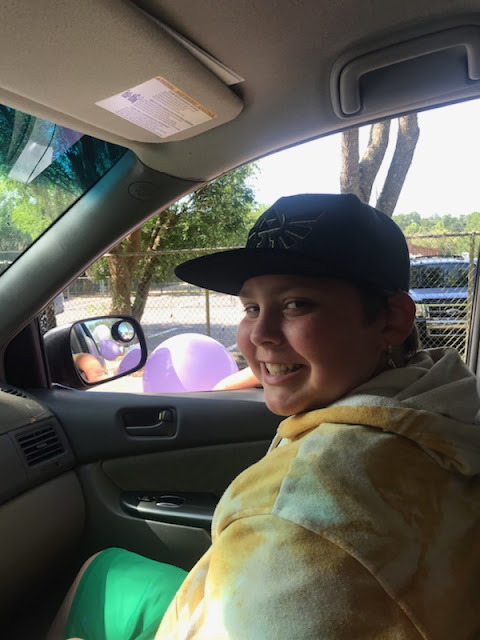 The other day Lily told me that Owen was having his fifth grade graduation today and it was going to be a drive-by graduation and we could come if we wanted to but not to stress out about and I thought, Oh boy, drive-by graduation? Really?
Plus I'd have to get up a little earlier and it would fuck with my morning routines which is just about impossible for me to deal with these days but god, you know? Owen. My Owen.
So we did get up a little earlier and I attended to the chickens and we got ourselves ready and drove over to Lily's so that we could ride in the car with her and Owen and Lauren. I had thought that we would drive by Owen at school, but no, Owen was to be in the car too, and we would drive by the entire school, all the classes outside by the fences, students, teachers, from Pre-K to fourth grade and by golly, it was just about the best graduation I ever went to. Each child got cheered for and recognized and there were bubbles and noise-makers and it was sincerely jolly and delightful. 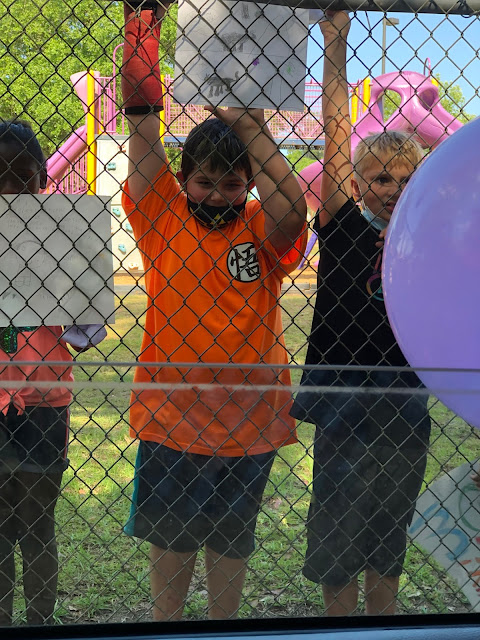 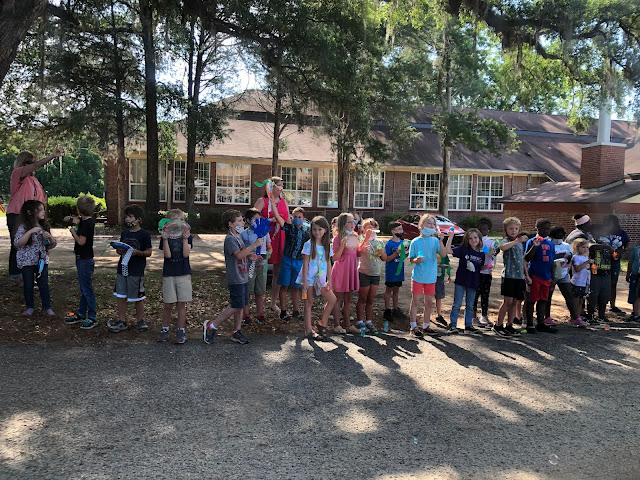 The merriest of merry makers. 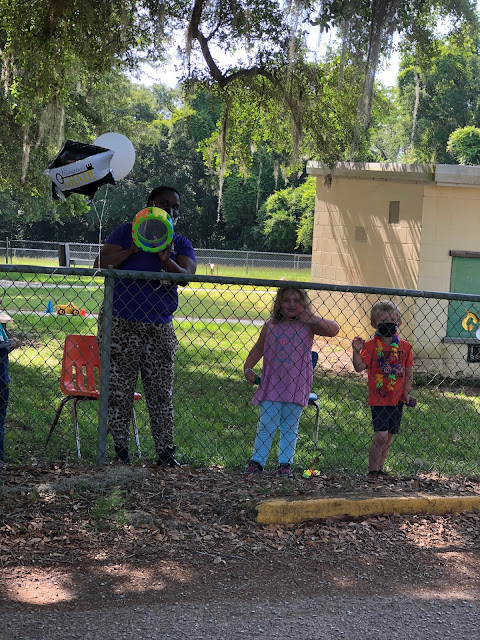 Cars were decorated with posters and balloons, kids were riding with their bodies half out of sun roofs, and it was absolutely wonderful. I was so glad we went. At the very end, there was someone taking graduation photos through the car window, and each child was announced over a loud-speaker, and each child got a yard sign proclaiming them a graduate of Chaires Elementary school and a folder with cool stuff in it.
Owen, being eleven years old, tried to keep it all cool and act like it was no big deal, no big deal at all but we could tell he was a little bit thrilled, at least.
And Lily cried.
When we got back to their house, we took a few pictures. 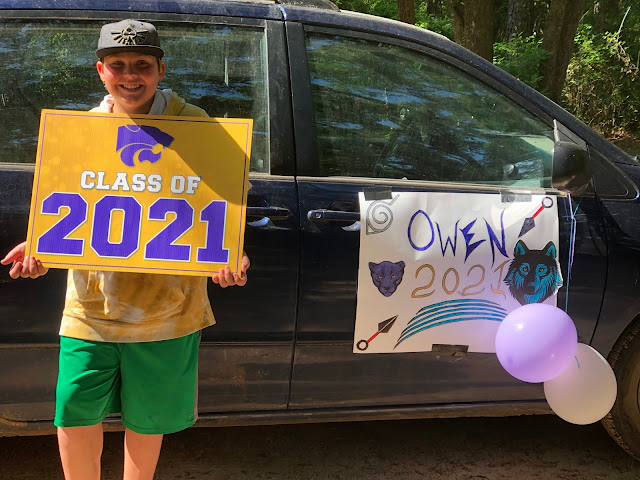 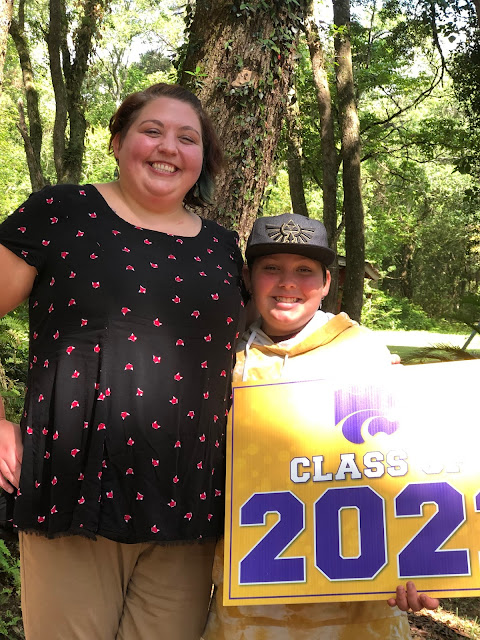 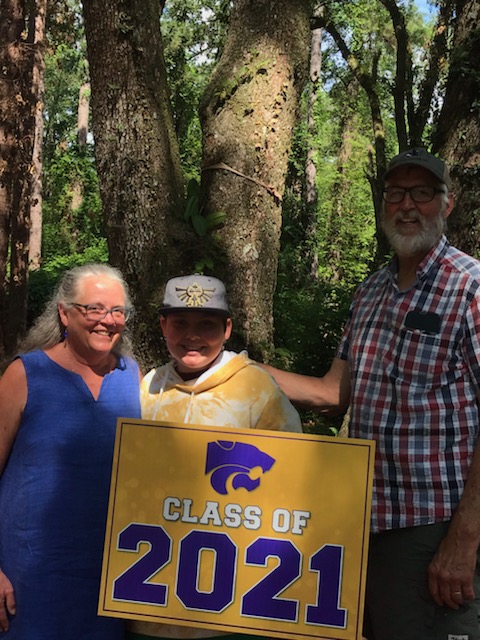 We're all so proud of that boy. When I took the picture of him holding the sign by himself I said, "Owen, you have no idea how many people have known you since before you were born and who care about you." He's known I'm writing about him, posting pictures of him, ever since he was old enough to grasp that concept but I doubt he really understands. I wonder if some day he'll go back through my blog and read and see what I've posted about him. I hope so. If I've written this blog for any reason whatsoever, it's so that my children and grandchildren will have a written history of this part of my life and how much of that has involved and included them.
They will know, without a doubt, how much I love them.
August and I were talking before they left and I said, "You know what grandmothers are really the best at?"
"What?" he asked.
"Loving their grandchildren and letting them know that there is always someone who knows how amazing and wonderful they are and who always, always loved them."
And I believe that.
We decided to all go get lunch after we were done taking pictures so we headed to the Hilltop. I've got to take a picture of that place sometime. It is...well, I guess I'd have to describe it as country unique. We got there before the lunch time crowd of local work crews and highway patrol officers arrived which was good because it gets busy fast. Since they serve everything from salads to hamburgers to seafood to Reuben and Cuban sandwiches, barbecue, and fried chicken, it's a very popular place. We sat out back and waited for our orders to come up and then we ate, sharing onion rings and macaroni salad, drinking vat-sized cups of soda and iced tea.
And then it was time to hug good-bye and Lily and Owen and Lauren went off to pick up Maggie and Gibson, and Mr. Moon and I came home to do what needed to be done around here.
He has finally finished with the azalea trimming and Chinese Rice-Plant pulling. He had to use the four-wheeler to pull the largest of those. Trust me- we are not done with them. They will be back. I referred to the field of Crocosmia revealed by the pulling of that jungle a few days ago and it's even worse than I thought it would be.
Sigh.
That's going to be about a month-long job in this heat. I can only take being outside for a certain amount of time and then I'm done. Mr. Moon was soaked as thoroughly as if he'd been working outside in the rain for three hours and I do not know how he did it.
Hell, I just picked stuff in the garden and that twenty minutes about did me in. 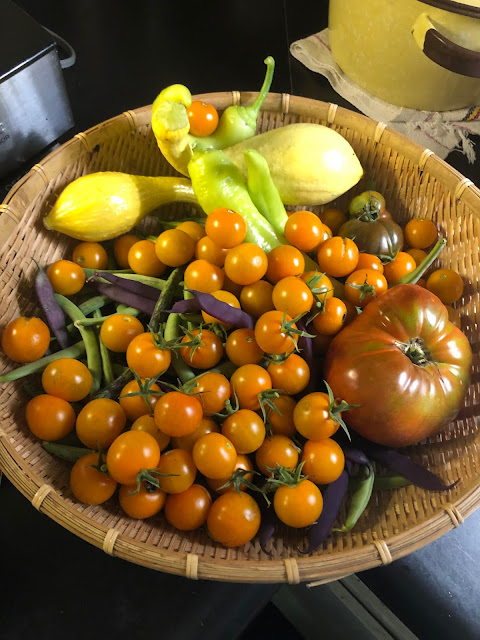 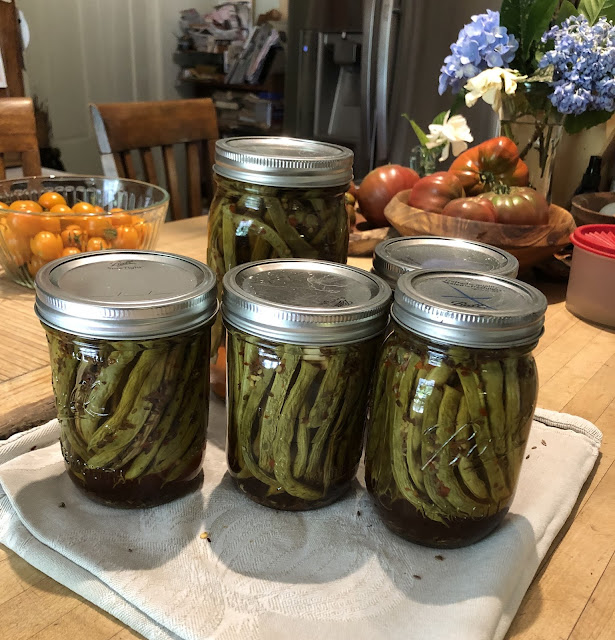 To add to the overflowing bounty around here, Mr. Moon found this when he cleared: 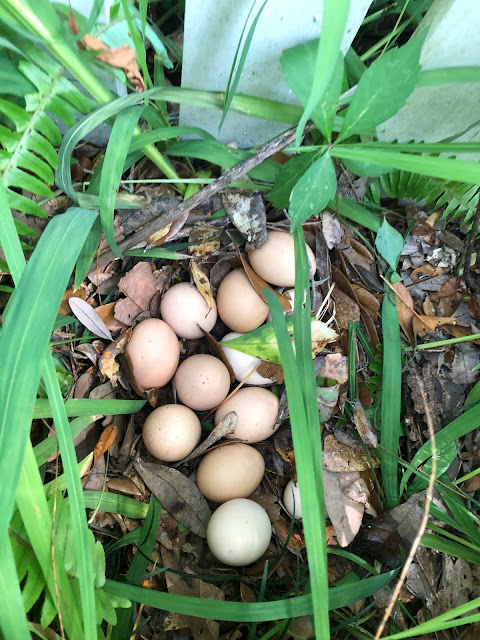 I knew I wasn't getting all the eggs that the hens were laying. That nest is between the front fence and the sidewalk, hidden in croscomia, ferns, and Virginia ivy. What in hell are those chickens thinking? I brought them all in and float-tested them for freshness and all but three failed and then my husband and I agreed that we didn't really feel the need to eat the three that passed, either. So I threw 'em all out in the woods.
So. It was a good day and I can't believe Owen is going to start middle school next fall. I was just taking his mama to the same middle school he'll be attending yesterday! I swear!
But here's the real shocker I'm trying to wrap my head around- tomorrow is Hank's forty-fifth birthday.
Excuse me?
Dear god, I am old.
Guess what? I feel old. I think my husband does too. All we do is walk around groaning and wincing at our aches and our pains, our joints are stiffening and crumbling as we speak, sometimes we are laughing, sometimes definitely NOT laughing at our rapidly multiplying symptoms of aging.
Well. That's the way it is. We've both spent our lives working pretty hard, using our bodies to build, garden and grow, work and walk, haul and dig, and in Mr. Moon's case- play basketball on a very serious level, and in my case to gestate and birth four babies.
No wonder we get tired now. No wonder our bodies feel worn out.
They really fucking are.
And yet... on we go.
Love...Ms. Moon
Posted by Ms. Moon at 6:25 PM