Life In The Time Of All This 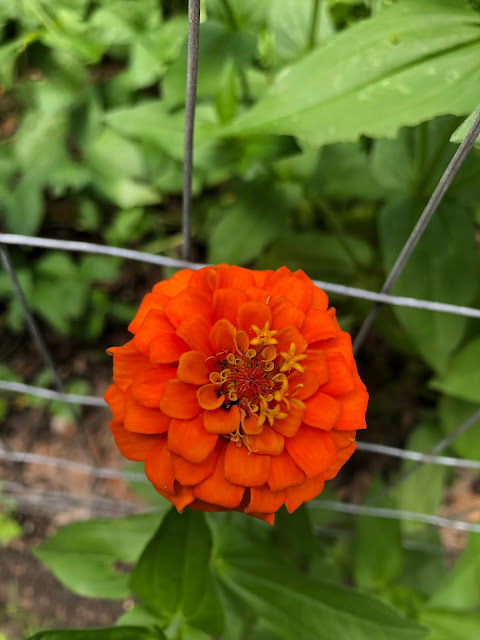 It's been...a day.
I woke this morning to find a text from my GP's office telling me that I had an appointment at 11:40 tomorrow morning.
WHAT?
I had absolutely no knowledge of this. What I remember about my last yearly appointment was that it was in June and that by the time it was over, the office staff had gone to lunch and I (whoops!) forgot to schedule my next one although of course I've been trying to make myself call and do that for months now but...
I haven't.
I immediately went into total panic mode after reading that text. It gave me the option to cancel, confirm, or reschedule. Of course I haven't had my bloodwork done and if you don't have that then there's really not much to discuss at an annual physical. I suppose I could have driven into town when I got the text, had blood drawn and then gone to the appointment tomorrow but hey! Probably wouldn't give it time enough for results, right?
I am talking about this as if it's funny but to me it was the absolute opposite of funny. I adore my GP but that fact does nothing to make me less anxious when it comes to exams.
Nothing. I can't even blame him for being so freaked out. As I have said recently, my fear of all things medical is only getting worse as I get older and that's saying a lot. I can literally remember having what I now know were panic attacks in doctors' offices when I was a child, even if the appointment was for my mother or my brother, not for me.

I texted back "reschedule" and got a message to call the office to do just that. Listen: even texting to that office takes a hell of a lot of courage. Calling?
Well, if I tell you right now that just writing about all of this is ramping up my anxiety to a very uncomfortable level, it is only the honest truth.
But I did it. And the lady was so very nice. I've rescheduled for sometime in August that I don't want to specifically name because I'm crazy as a loon and that's just the way it is.
I knew I had to do something to calm my heart and soul and blood-pressure so I took a walk and that did help tremendously, especially with the physical stuff. With anxiety, the physical and mental connections are undeniable and it is no wonder that many, many people go to the ER every day, thinking they are dying to discover they are "only" having an anxiety attack. I am aware enough now to know what's going on with me and my body and anxiety but that doesn't always help a whole lot. I still feel what I feel but I do know that getting out and taking a good, hard walk can relieve some of it.

So that was my morning.

I spent a great deal of today looking for a few new dresses to wear in North Carolina as well as a new pair of Croc flip-flops, having blown out a pair yesterday at the beach. I did find two dresses online that I think will be okay and a pair of Crocs but instead of my usual black, I got bright teal blue because that appears to be the only color available in the entire world at this point. Whatever. 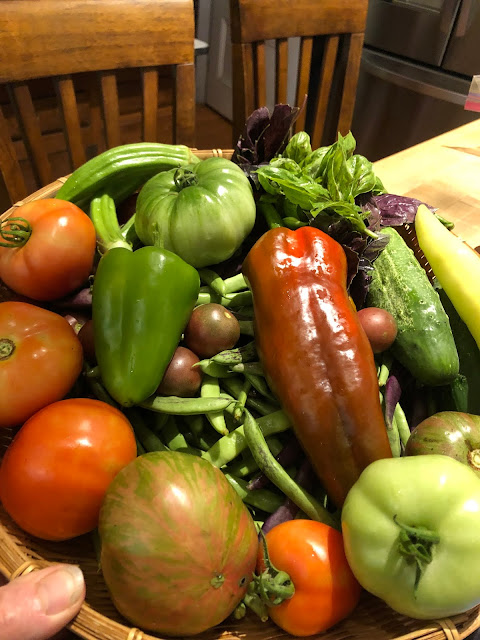 Here you have various varieties of tomatoes including the Berkley Tie-Dye. Also a gallon of green beans, three okra, two cucumbers, one Carmen pepper, one picnic pepper (I think), one banana pepper, and a bit of basil. I took No Man Lord some tomatoes and eggs this morning on my walk. He took the bag I handed him, said, "Thank-you," and that was that. I did ask him how he was and he said, "I'm here."
What more is there to say?
Have you seen that Bill Cosby is probably going to get out of prison and that he cannot be retried? The Pennsylvania Supreme Court ruled that his trial was "unfair" due to a former prosecutor's promise not to charge him. This prosecutor also worked as one of Trump's lawyers during one of his impeachment trials so I suppose I really do not need to wonder overmuch about how THAT happened.
I am livid.
And I cannot imagine how the women he assaulted, drugged and raped, must feel right now.
The patriarchy has gone nowhere, no matter how many people are under the impression that "things are better." Just as with racism, things just change a little bit. And not for the better.
That's all I have to say this evening. I am sorry. I am not very cheerful.
Love...Ms. Moon
Posted by Ms. Moon at 6:16 PM