Brunch sort of turned into lunch as both Hank and Lily had a hard time getting out of the house. Hank was still trying to write trivia for tonight and Lily first had to get Maggie in the shower because instead of just playing in the rain the way she was supposed to be doing, she played in the mud too.
Now you can't blame a girl for that.
And then they couldn't get Pepper the dog into the house. Maybe she wanted to play in the mud too.
So by the time we actually all sat down at the table, it was noonish.
Gibson gave everything I'd cooked a score.
Bacon- ten out of ten.
Sausage- ten out of ten.
Eggs- eight out of ten.
Pancakes- nine out of ten.
And his mother's hashbrown casserole came in with a ten out of ten. So it was a pretty good breakfast.
Nobody went hungry, I'll say that.

And then there was playing and stuff. A little book reading. Owen listening in on the adult's conversation. He's at the age where he laps all of that up. And it can get interesting when Hank's around. We checked out the chicks. Maggie "drove" the go-cart with dolls beside her. It was all pretty fun. She wanted to go look in the garden and see what vegetables we had. I picked her some zinnias. She asked for a pink one for her mother because pink is her favorite color.
When they left, we just sort of collapsed. I finished cleaning up the kitchen and then I finished making the Fat Man Pie.
Hoo-boy. That thing could probably provide ten adult human's daily caloric needs for a week. Not their nutritional needs but their caloric ones.

It's a bit odd that Father's Day isn't a bad day for me, considering my history with fathers. Fathers of mine, that is. First I had the one I call My Old Drunk Dead Daddy, and then the one I call The Asshole.
The first one would disappear for weeks at a time, abandoning his wife and children with no idea where he was and no money for food; the second was a sexual abuser.
I do not remember one Father's Day from my childhood although perhaps we did have a few celebrations for my grandfather who was a good man, and I'm sure we also had some for The Asshole but I've thankfully blocked those from memory.
And I doubt there was anything in the world I wanted more than I daddy when I was growing up. My stepfather's ability to find a woman with a daughter who was so perfectly poised for grooming as a victim was impeccable. Hey! He was a smart man!
Too bad he was a pedophile.
The Impeccable Pedophile, aka, The Asshole.

So you know- Father's Day does have the potential to be a triggering event for me but honestly, it's not so much. I think that's because I found the best daddy for my own children that I could have ever imagined. I posted this picture on Facebook. 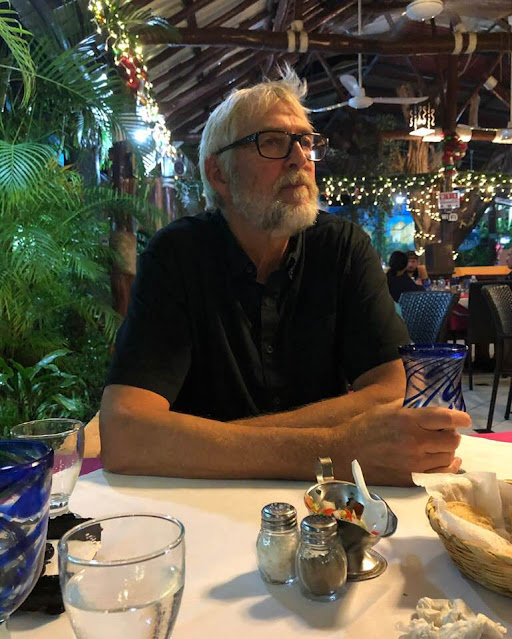 It's one of my favorite pictures of Glen. It was taken in Cozumel on New Year's Eve a few years ago. And as I said on FB, "When I met this man in 1983, you can understand if my first thought wasn't...hmmm...he'd make a great daddy."
Which is true.
But of course he turned out to be a spectacular daddy, a loving daddy, a daddy who provided in all ways for our kids. The ones we had together and the ones he got as bonus gifts when we were married. And as I also said on Facebook, he is legendary as a grandfather.

I have no idea how I got so damn smart when it came to saying "yes" to a life with him but there was something in my heart that knew if I had one shot at happiness this was it.
Perhaps it was because he was so far from "my type" of man that it was like he was a different species and maybe I'd finally grown up enough to realize that "my type" wasn't really the type I needed.
Or even really wanted
And besides, I was already in love with him by then.
Thirty-eight years later I realize that I didn't even really know the vaguest possibility of how much I would come to love him over the years nor did I even begin to know what a truly good man he was.
What a truly good man he is.

So. That's my Father's Day story for today.

I distinctly remember back when I was probably about fourteen or so, as miserable and life-sick as a girl could be and I had a dream, a real dream, and in it there was a boy. He was just there but he radiated such love and goodness that he calmed my heart and my soul and I never forgot the comfort and peace I had felt in that dream.
I guess I married the man of my dream.
I am a woman of great fortune.
Love...Ms. Moon