Try To Love One Another. Until You Can't

It's chilly and gray again today but not AS chilly. I have a big (too big, of course) pot of soup made with chicken and greens and carrots and celery and onion and garlic and leftover cauliflower and asparagus simmering, and sourdough rising. I will add a little brown rice to the soup before long and also some left-over risotto. I have squeezed half of one of Jessie and Vergil's huge lemons into it and it will be good, I think. I did not wear a chef's outfit when I made it the way Levon did this morning when he helped make the biscuits at his house. 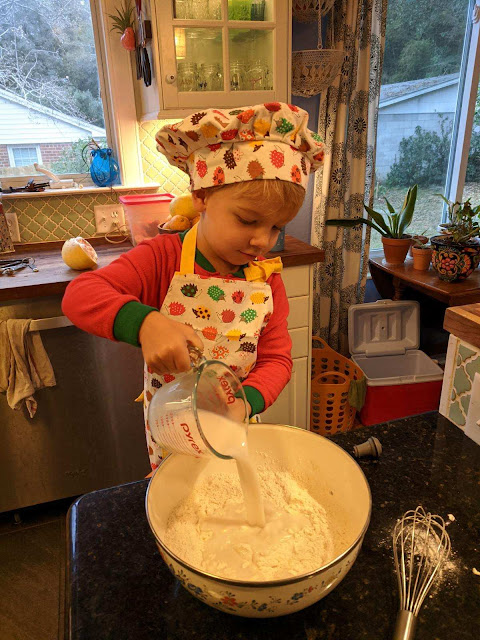 Could there be a more professional looking chef than Levon?
I think not. May certainly picked the perfect gift for the littles. And Hank and Rachel gave Levon truck stickers from the Dollar Store which he woke up in the middle of the night to play with because...TRUCK STICKERS!
Oh, our babies.
Here are some more pictures from yesterday, taken by Rachel and Jessie. 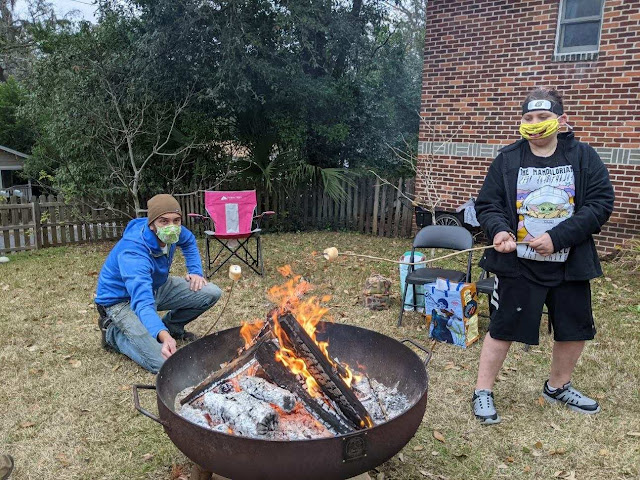 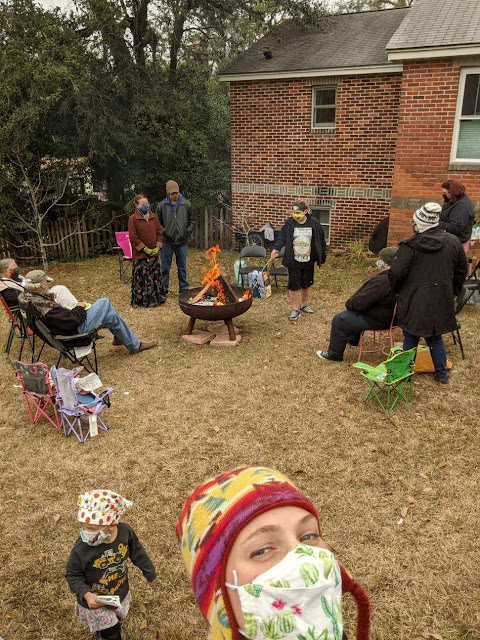 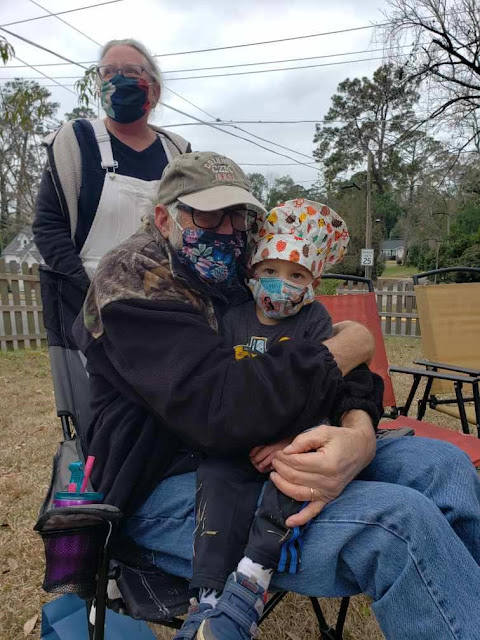 Our pod party. Or, pods party, I suppose I should say to be more accurate.
We all agreed that it was a beautiful time. Lily even reported that Owen said that it had been a great day because he got to see everyone. Once again, he joined the adults in conversation while "the children" played. I love how he does that. He makes me proud.
It's hard to keep up with the news right now. I talked to Lis today and we agreed that things have been beyond horrific this week. The thing that scares me the most is the information coming out about how much organization there had been before the attempted coup and how much cooperation had been given by the very people who are sworn to protect our government, our Capitol, our democracy, our constitution. Now THAT is the scariest thing to me of all. Of course everyone from the FBI on down had known about the plans to take the Capitol and yet...
And yet?
I don't even need to mention how much blood would have run in the halls if this had been a BLM protest. In fact, I probably have mentioned that. It's as if the rottenness of Trump has taken hold and taken over down to our very core and who do we look to if everyone is in on it?
"Look for the helpers," Mr. Rogers so famously said. What if the helpers are the ones who are causing the terror?
Now who sounds like a conspiracy theorist?
It's not a conspiracy theory if the facts are true, is it?
There's no need for me to recite facts and figures, reports and numbers. There are others who do it so much better than I right here in our community.
What I do not understand is how so many of us have watched this nightmare unfold for over four years now and yet, how so many people appear to be shocked that things have reached this point. Even though at first no one in their right mind believed that Trump's attempt at a run for president would result in anything but humiliation for him, it is now quite obvious that there are so many among us who are not in their right minds. And as for those who are thrilled that things have reached this point I- well, I can only weep. And did even the most enthusiastic of Trump supporters, did even Trump himself believe that this insurrection would or could lead to the overturning of the vote?
Was there reason to believe that the military would indeed step in and take control to make that happen? I am not discounting that. I would much rather think that it was all a bunch of evil idiots who somehow, out of nowhere, rushed the Capitol and posed with their feet on lawmaker's desks and stole souvenirs and pissed and shit and dumped their trash anywhere they pleased and had the gall to take pictures and post them than to think that there had been a carefully and cleverly crafted plan to make this all happen by higher-ups, even highest-ups, who only used those evil idiots to do their dirty, nasty, primitive work for them.
Thank all the gods that be that even though there were deaths and injuries, Nancy Pelosi was not shot, Mike Pence was not hung, and no bombs went off.
And of course, while all of this is going on, more and more Americans are being sickened and are dying by a virus that Trump could have mitigated if he'd had two brain cells to rub together, the humility to listen to the scientists, and enough empathy or humanity to even try.
It's tough days for anyone to try and be an enlightened human being who wants to feel compassion and even love for all sentient beings. As for me, I think I've given up even trying. I'm fairly certain that that is not my role in this lifetime.
And there you have it.
Love...Ms. Moon
Posted by Ms. Moon at 6:20 PM