Pancakes On A Monday 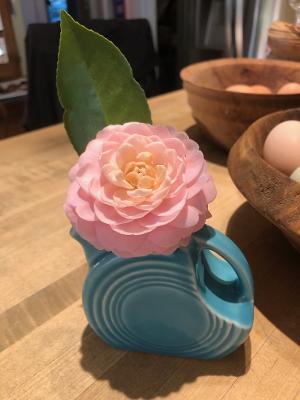 I found one Pink Perfection today and put it in my tiny pitcher. I can't tell you how much I love that little thing. I have no business at all bringing one more vase, napkin, dish, glass, pot, pan, or bowl into this house but I'm human. And the score at the dump seemed almost like a little giggle from the universe. Have I not been saying that the one thing I do miss in not being able to go out isn't restaurants or movie theaters or bars but instead- thrift stores- and especially finding pretty napkins in them? And here these things were at my dump, for free. 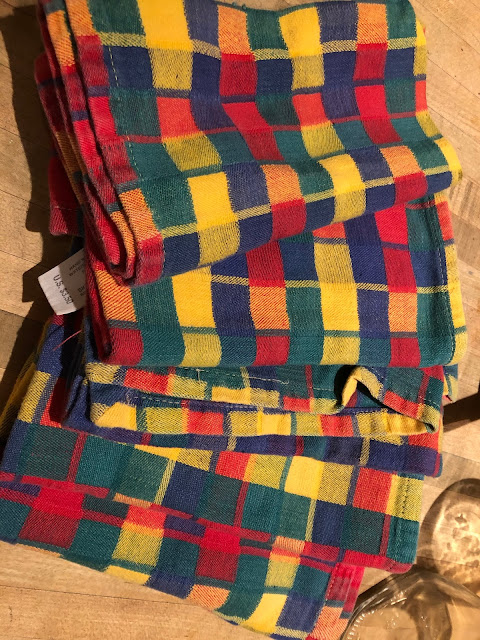 And of course I had one of my horrible dreams this morning in which I had a house so packed with stuff that there was no possible way I could clear it out short of burning the whole damn house down. And the main problem was that mixed in with all of the crap were things I really cherished and loved. And this is probably at the root of my clearing problems in real life- I am too attached to so many things and there are things that I'm not really attached to but feel guilty about getting rid of.
Ah. We all know this feeling, I think. But if I had to do it all again, I think I'd be a little more Zen about it all when it comes to collecting. 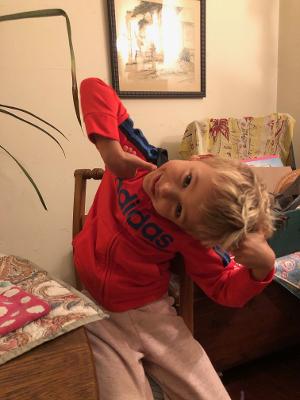 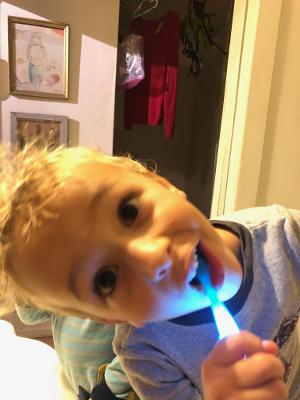 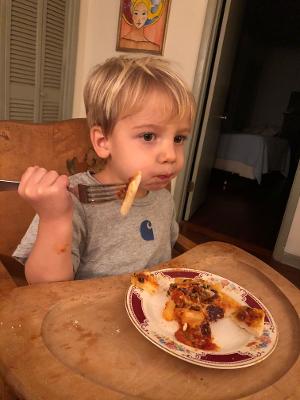 Silly pictures from last night. I love that Levon insisted on eating his pizza with a fork. As usual, I made way too much food. Two rather large pies with all sorts of good ingredients on them and neither boy finished an entire piece and Mr. Moon and I were only able to gulp down two pieces before it was definitely time to get those guys in the tub and in their pajamas and settled down.
But after stories and cuddles, they did both lay down in their beds and only got up once apiece and then slept to the incredibly late hour of 7:20 at which point Levon was happy to snuggle but August only wanted to put his head down by my feet and wiggle his toes in my face.
He's a cracky, that one.
So Mr. Moon got up with them and I slept way longer than I even usually sleep. We'd stayed up to watch Mary Wharton's film, Jimmy Carter: Rock and Roll President. It was on CNN last night and before it started, there was a short interview with Mary and I couldn't help but well up at the sight of her. "I used to babysit for her!" I had to say even though Mr. Moon was already well aware of this.
What an amazing film. I've always thought of Jimmy Carter as a man of true Christian beliefs- his actions always speaking louder than his words, his words always gentle and kind. And after watching this documentary, I am more convinced of that than ever. At one point in the film, I think it was during the hostage crisis, I told Glen, "He was just too good to be a president."
The US just didn't get him. They couldn't imagine someone who would do anything, even if it was politically harmful to him, to resolve an issue in a peaceful manner assuring that no lives were lost. And then to find out that he truly, absolutely, without-a-doubt loves music and brought so much music to the White House was just a delight. And those musicians loved him! From Bob Dylan and Willie Nelson to Dizzy Gillespie to The Allman Brothers, of course, they all adored him and some, to this day, are still good, close friends of his. The joy in Carter's face as he listened to the music was simply as pure as anything I've ever seen.
And then of course, he was replaced in the White House by Ronald Reagan, and I'll never understand how that happened.
Anyway, the film is amazing and if you get a chance, please do watch it.
And so today was about pancakes and reading stories to two boys, one of whom loves to sit above me on the little sofa, messing up my hair, and we laughed and chanted together at "Giraffe and a Half" with all the bees on the knees and rats in the hats and chairs in the hair and spikes in the bike and dragons in the wagon and rose on the nose and mole in a hole and snakes with cake and so on and so forth and then it was time for Boppy to take them home where their parents were happy to see them. After they left I took my time in cleaning up and straightening up and sweeping up and looking up at the clear blue sky and picking greens for a big salad for tonight's supper.
Here's some more camellias. 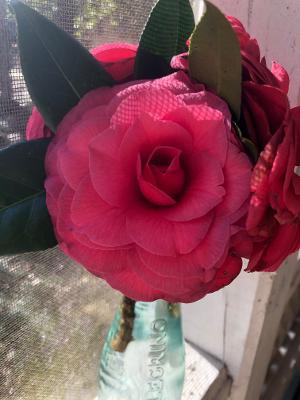 Jessie brought them to me yesterday and they are the same variety that I used to steal from the yard next door when no one was living there and now bitch about because the guy who bought the house cut down the almost-tree. Jessie actually stole these from her neighbor's yard and if I can get it together, I'm going to see if I can root some. See the almost lavender edges of the petals?
Be still my heart.
Love...Ms. Moon
Posted by Ms. Moon at 6:22 PM