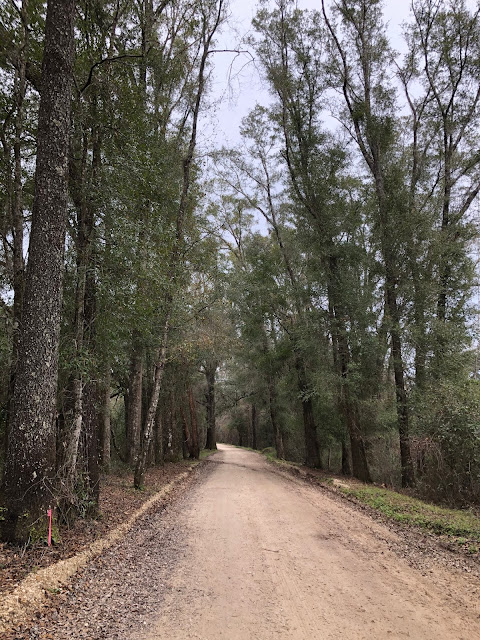 Another gray day in Lloyd but I managed to get off my tushy and put on my walking shoes and I drove over to White House Road. White House is paved but the little road I park on is not but it's well maintained and easy to walk on. It's not very long though, just an access road to a few houses along it. The weather widget predicted that it was going to start drizzling in nineteen minutes (so oddly specific) so I didn't want to get too far away from my car and my route only took me a mile this way and a mile back, and then down the little road and back. It was a peaceful hour and I saw pairs of cardinals and heard the racketing of crows as I walked and when I ducked down a side road to pee, I heard something and looked up to see two big, beautiful does running a few yards in front of me through the woods, their white tails flashing through the trees.
And I never did get wet although as soon as I got back in my car, a drizzle commenced.

The only pictures I took are the one above and this one, not very interesting, really, of mushrooms growing on a downed limb. 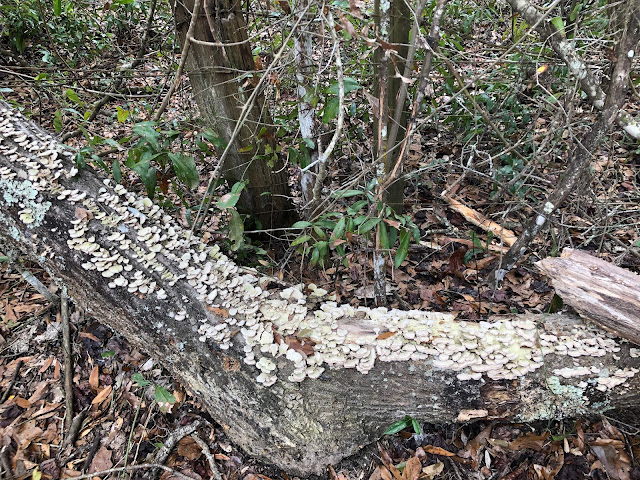 It's harder to get excited about taking pictures when the leaden sky prevents any of the brilliant light and resulting shadows that lead to more dramatic shots. Still, a gray day can be beautiful, a different kind of beauty but still, something to be aware of, to recognize and register.
The rest of the day has been quiet. I've worked on August's quilt and done laundry and all that other normal stuff. Mr. Moon's still clearing out behind the garage so that roofers can get to where the leaks are. He's also been clearing out the garage, I think, or at least he mentioned doing that this morning.
I've watched some of the videos online of people who were part of the sickening riot on the Capitol being arrested in airports and dragged away, all of them sobbing and boo-hooing. In one of them, a man who had been taken down to the ground actually shouted, "You're treating me like a Black person!"
And I'm sure that if asked, this is a person who would deny that there is any such thing as white privilege.
Steve Reed emailed me to alert me to a subhead in the New York Times that he knew would amuse me. The article was titled "Trump is Making Pence Look Good" and the subhead said, "Somewhat in the way that Keith Richards used to make the rest of the Rolling Stones look sober."
I wrote back, "Keith is famous, infamous, and still alive!"
This cheered me.

And now I've looked at the news to see that the FBI has received information that armed protests are planned for every state capitol AND the national one from January 16-20.
What sort of reaction can one have besides despair?
Perhaps fear? Anger? Horror?
Certainly. All of those.
It's like all of the dark, evil birds of this country have come home to roost. The gun laws, for one thing. The Republican party's inaction when it has come to Trump, their defense of him, their ignoring of his lies, his wickedness, his encouragement of the breakdown of our society and the very principles this country was founded on, and oh yes- the Constitution. Their support of him. Their lack of any moral fiber or ethics whatsoever as they pander to their basest base.
Here we are and we know exactly how we got here.
I'm going to go make supper. There's absolutely nothing I can do at the moment to change anything and I don't believe in prayer.
Be safe, y'all. Hold on. Live to represent all of that which is good and which is right. That which is love and that which is light. Hold on.
Love...Ms. Moon
Posted by Ms. Moon at 6:25 PM