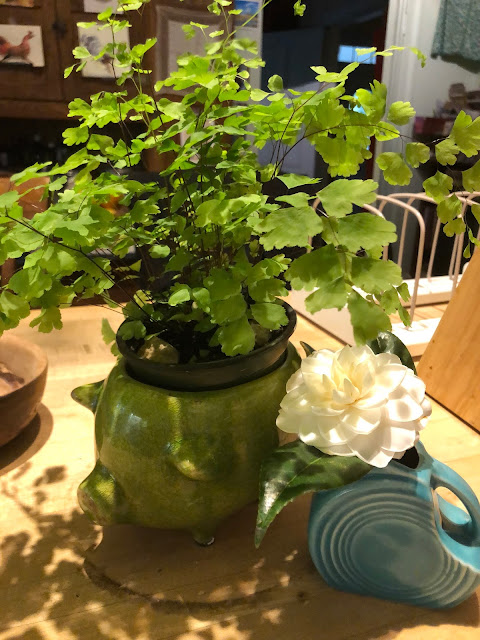 Jessie brought me the prettiest little maiden hair fern today. She'd been to the nursery yesterday and knowing how much I love them, she got me one. For a little while, I joined a Facebook group for people in Tallahassee who like to grow plants but I had to leave the group when it became apparent to me that there are many, many people in Tallahassee who have become insanely obsessed with plants and although there's nothing wrong with that, I just couldn't deal. I've got all the plants anyone could ever need and if there were a Plant Protective Services I would probably be reported for the amount of neglect around here when it comes to mine. And yet, somehow I've got plants older than some of my children. But I will admit that walking through the greenhouse section of a local nursery sends chills up my spine as I see beauties that I don't have. And I have been wanting another maiden hair fern. The darn chickens ate my last one. They love them as much as I do. I will keep this one out of their reach.

Guess what Mr. Moon just unloaded into the garage?
MY NEW STOVE!
It wasn't scheduled to arrive until March so this is quite a surprise. We have to get things ready before it can be installed. A new backsplash is required, and also a new range hood which has not arrived yet. And when all of that is in place, a guy from the gas company is going to have to come and put it in for us, hook it up properly, and make sure it's all working.
I'm pretty excited.
One of the things I'm most looking forward to is having oven shelves that will actually slide and are heavy duty enough to support things like baking stones and cast iron dutch ovens. Because my racks don't slide anymore, I end up burning myself trying to get heavy things in and out of the oven. I am wearing two bandaids as we speak that are covering burns I got in just that way. Levon noticed them today and asked me why they were there and I told him. Later on, when we were getting lunch ready, I'd put a bowl in the microwave and when I took it out, it was hotter than I'd expected and I said, "Ow! That's hot!" Levon, who was leaving the kitchen at the moment for something more fun than eating leftovers said, "Get another bandaid," in the most casual way imaginable. Like, "Well, there you go. You know what to do by now."

Today's visit was preceded by a warning that there would be no TV at all. Just forget the TV. When they got here, Mr. Moon was watching the online bidding at an auto auction to see what price a vehicle he'd thought about buying ended up being. The boys were fascinated by the auctioneer, his rolling, staccato announcing of the bids. So they did get that screen time. We played matching game and I showed August how his name-blanket was coming along. He did not appear to be that impressed. Levon asked to see the fabric with the heavy equipment on it that I'd bought for him and I showed it to him again. He is so in love with it. We talked about making pillows with it for him. He liked that idea.
"Yes!" he said. "Make pillows so that I can lay on them and 'joy them."
Meaning "enjoy" I'm fairly sure and it charmed my heart.

We read some books and August and I got to have a nice little chat about this and that while Boppy and Jessie and Levon were out unloading the trailer in preparation for the hauling of the stove. Before Jessie and the boys left, August wanted to show me the "circus tricks" that he and his mother have been doing. Here are a few of them. 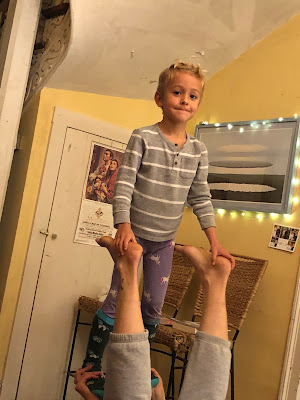 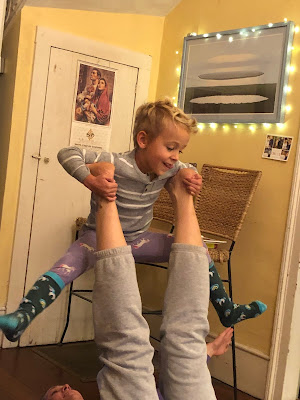 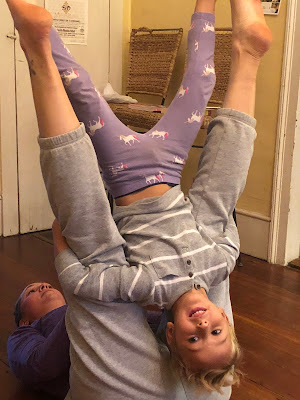 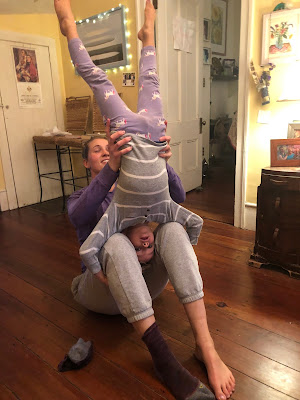 We have to get that boy in a gymnastics class as soon as it's safe.
Levon did a trick too. 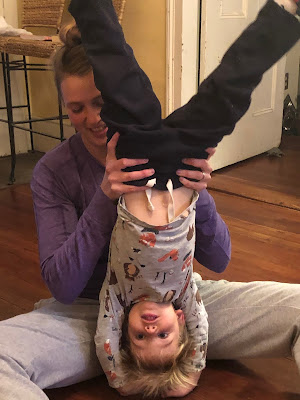 It was so good to have the light and energy of those boys and their mama here on another chilly, pewter day. The sky is just so gray and heavy that it's getting harder and harder to imagine sunshine.
Tomorrow I'm going to town to shop for supplies. I'm wondering if I should buy a giant bag of rice and pounds and pounds of beans. Are we about to have a civil war? I can't even bring myself to talk about any of it today. There's nothing new I can add to the conversation, there is no unique perspective that I can offer. We can all read the news, see the videos, parse the information available.
Meanwhile, I'm going to go peel shrimp and get through the remaining hours until I can sleep again. My dreams have been, even for me, wildly entertaining, sometimes disturbing, deeply meaningful, often troubling, and generally explainable.
Pandemic dreams with a side order of terror. And yet- I still yearn for sleep. At least I can wake up from that.
Love...Ms. Moon
Posted by Ms. Moon at 6:13 PM