Chocolate And Worms And A Friday Night Toast 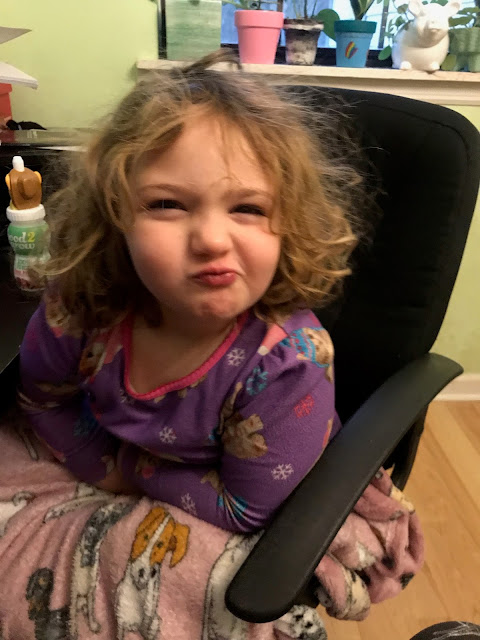 This picture came over the group text this morning. Here's Lily's explanation:

"This girl told her teacher she was frustrated when they talked about their feelings this morning. Reason being I wouldn't give her chocolate for breakfast."

I thought Lily was talking about herself being the teacher but no, it turns out that Maggie has two fifteen minute Zoom sessions a day with a teacher and other students. The teacher told Maggie that she was sorry she was feeling that way but that it's okay to feel frustrated.

But really? Could you turn that girl down if she asked you for chocolate for breakfast?
Okay. Maybe.

My pie last night was semi-okay. I ended up making a syrup with the juice from the guava shells and that added a lovely shiny finish to the pie and it was fine. Mr. Moon said he liked it and so did Jessie when she came over this morning. She brought the boys over for me to stay with a little while so that she could go to Costco. Boppy had to go to work and I told him that I was going to sit in his chair with those boys and cuddle them and watch TV the whole time they were here.
I mostly did. August sat on the sofa arm next to me but Levon happily sat with me and damn if I didn't almost fall asleep. That chair is simply soporific. We watched a Goofy movie about Goofy and his son, Max (who knew Goofy had a son named Max?) who went on a vacation together. I have no idea where Mrs. Goofy was. There was some theme about a rock concert and impressing a girl too but I sort of lost the thread about a third of the way through. Even Levon said, "This movie is incredibly long."
I thought he said, "This movie is incredibly wrong," and I agreed with him but no, that's not what he said. He kept saying, "Nong! Nong!"
"What's he saying?" I asked August. I always used to translate for my brother when he was young.
August, without taking his eyes off the TV said, "Nong."
But it turned out he did mean "long."

When Jessie got back she dug up some of the monkey grass in my future herb and flower garden. Or at least where I hope my herb and flower garden will be. She needed some ground cover for their backyard and had actually bought a lot of monkey grass from the nursery before realizing that it was the same as the shit I'm constantly battling in my own yard. I mean, she was paying for something that I'd pay someone to dig up.
So she and Levon and I dug some up and she's taking the other stuff back to the nursery. There were lots of worms. 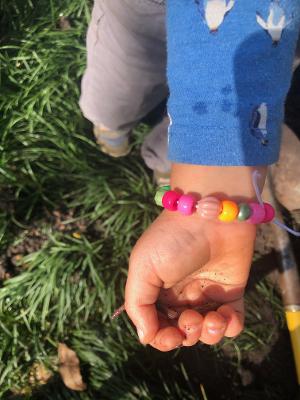 It's really hard to see but Levon is holding one in that picture. Before we watched TV, the boys and I made bracelets and that is Levon's. 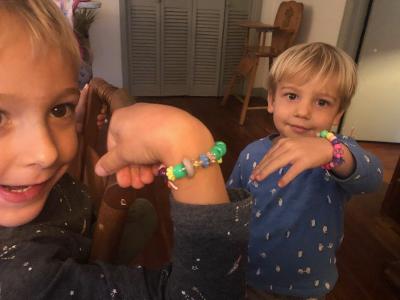 I found the bracelet on the table in the hallway after they left and August pulled his apart and scattered beads all over the Glen Den when we were watching Goofy.
Sigh.
Those beads are all over this house which is the least of my problems.
I think it's Friday. I hope so because I washed the sheets. Also, I have glasses in the freezer for martinis. Tonight I will raise my glass to the fact that a week from now, DJT will be out of the White House and out of power, no nuclear codes in his pocket, no place on Twitter for his lies, back to Mar-A-Lago which is totally appropriate because he is obviously the ultimate Forida Man, and his place in history is assured as being the absolute worst president in our history, and I sincerely and with all my heart hope that there will not be one in our future who is worse.
The Past And Future Worst, if you will.
We will be able to go for hours at a time without thinking about him. Just think about that! HOURS! And then, as the months and years progress, we'll be able to go for days without thinking about him although most of us will still have PTSD from the past four years and the triggers will be with us always. We will read the Owl and the Pussycat to our grandchildren and will be rocketed back to, "When you're a star they let you do it.You can do anything. Grab 'em by the pussy. You can do anything."
And trust me- I am not making light of PTSD nor trying to make a joke. I am serious.
And we will be trying to heal and undo the damage that man has done for decades.
BUT! He won't be president this time next week.
Here. Camellias. 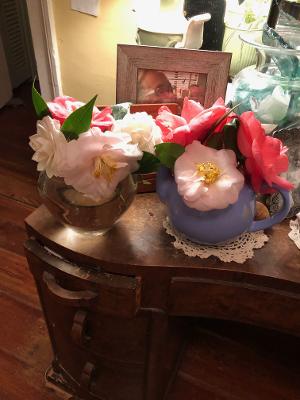 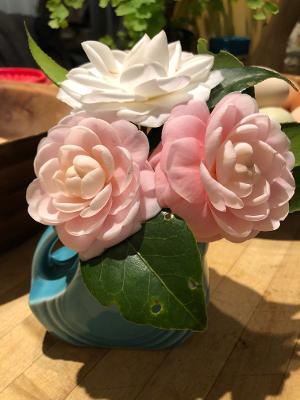