So Am I A Teletubby Now? 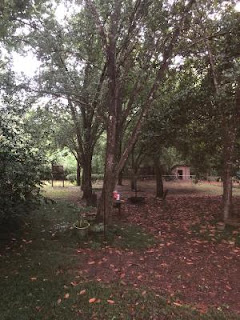 Today was odd and anxiety producing but it was also good in that I got some things done that I've been putting off and it has rained and is still raining and the ground is licking its lips as its thirst is slaked.

Yesterday I had called my compounding pharmacy to get a refill on my bio-identical hormones, knowing that they would have to call the doctor and they did have to call the doctor and then the doctor's office called me to tell me that it has been quite awhile since I've been in which is true and because of the law and hormones, they really had to see me.
Well. I told them that I'd been self-isolating and couldn't even HUG MY GRANDCHILDREN and they said they understood and I could do a televisit.
Would 11:45 today be okay?
Of course my schedule was wide open and so I agreed and I was a bit unsure how a televisit from your GYN would work. I mean- there's an app for everything, right? But breast exam? To check a cervix? To palpate a uterus?
Of course not.
First I had to agonize about where to sit for this televisit and then about whether or not this was GOING TO WORK and it didn't seem to be working on my phone so I switched to my laptop at the last moment meaning that my background was a stuffed tarpon that a friend of ours gave us after he found it in the garage of a house he bought instead of my dreamy library.
But it worked and the doctor was very, very nice and we just chatted and he does want me to get a few tests to make sure that the hormones aren't killing me which I suppose is understandable but he's not insisting that I do it "yesterday" as he said but I did have to set up one appointment for a test that I will not name for the sake of delicacy, although I will say that it is a delicate test.
And I ain't talking mammogram here although I'm supposed to get one of those too.
My appointment is for the end of August so I don't have to worry for awhile.
But all of that was a bit much for me, the girl who has to take Ativan to do anything medically related, sometimes even if it's not about her but someone she loves. Or maybe just read about online.
And since I'd accomplished all of that I decided to go ahead and do two clerical type chores I've been putting off, one of which was to get that copy of a marriage certificate in an envelope with all the necessary information to mail to Social Security and the other was to renew my driver's license online.
I did both.
Child.
I am exhausted.

Beyond that I've done a little laundry, planted some arugula in the rain, swept a tiny bit and completed two crosswords.
I was going to do some ironing. Mr. Moon does not have one ironed shirt in the entire closet that doesn't have long sleeves and although he surely hasn't needed one lately, who knows when an emergency will arise which will require him to wear something other than a pair of overalls with a tear in the butt and a ragged shirt with holes in it?
But just as I was about to go set up the ironing board, my oldest continual friend called me from Maryland and we chatted for a good long while which was extremely cheering. She was my best friend from about the 6th grade when we were in the same Girl Scout troupe which was a wonderful troupe that camped a lot and did many fun things. Our friendship continued throughout high school, as did our Girl Scout activities. We spent one summer together being counselors-in-training at Camp Juliette Low which I believe was in North Carolina and if we hadn't already been the best of friends we would have been after that. We were in the same cabin which once got struck by lightening and although no one died, we were almost scared to death. Most of the other CIT's had been attending the camp since they were unripe eggs in their mother's ovaries but this was Laney's and my first summer so we had a lot of catching up to do. As anyone who has attended summer camp knows, there are a myriad of seemingly mysterious rituals and activities which for some reason endear the campers and keep 'em coming back every year. So we had to catch up on everything from the lingo to where the commissary was to the songs to the specialty of the dining hall, which, as I recall, mostly involved white bread set out at all the tables along with lemons slices and bowls of peanut butter and of sugar. With these ingredients, you could make a "Juliette Low Special" which was the bread with peanut butter spread on it, then liberally doused with lemon juice and then sprinkled with sugar. Or perhaps the sugar went on before the lemon juice.
Yum! Yum!
As much as food plays a part in my memory, this is the ONLY thing I remember eating at Camp Juliette Low.
So my friend and I did not not discuss camp or Girl Scouts today or even old boyfriends or high school but we did discuss our husbands, our children and grandchildren, and our mothers.
I am so grateful to have a friend like that. Who knew me back when I was barely more than an unripe egg in my mother's uterus. Or at least when I was an unripe adolescent in my mother's home.

I've been dreaming about my mother and my stepfather almost every night. I'm truly getting sick of this. It's fucking disturbing to tell the truth. I spend most of the dreams yelling at my stepfather to get away from me, not to touch me, etc.
And also cleaning up their house which, as so many of my dreams do, involves garbage bags.
So, so, SO many garbage bags.
Is that as obvious as I think it is?

Perhaps I need a televisit with a counselor. Every podcast I listen to has an online counseling service as a sponsor. I suppose I am not the only one with problems these days. Not that the coronavirus situation has anything to do with the dreams about my mother, stepfather, and garbage bags.

It's still raining a bit and thunder is rumbling like god's tummy in the next room.

Time moves on. So do we.