A Different Kind Of Surprise Party 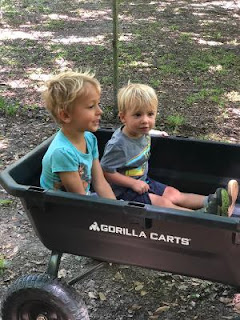 Jessie brought the boys over to play in the backyard today and it was a lot of fun for them. Boppy hooked up the little cart to the ATV and gave them rides around the yard which they loved. "It's so bumpy!" said Levon.
We had another picnic and the boys helped bag leaves 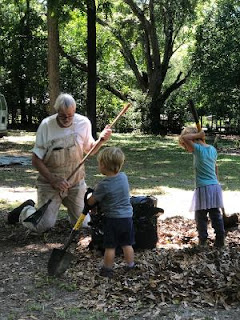 and all was lovely except for one thing...
Last week Hank had planned and organized a drive-by birthday parade party for Jessie for this afternoon and as the hours went by and it got later, I started to worry that they weren't going to get home in time and that Mr. Moon and I wouldn't have time to get ready and get to town.
But she finally got the boys all ready to go home and slowly, slowly they buckled in and drove off and I frantically texted everyone that she was on her way home and we got ready and we met up with everyone at a parking lot in a Catholic school about a block away from Jessie and Vergil's house. Hank and Rachel, May and Michael, Lily and Lauren and the kids and Pepper, our friends Kati and Liz Sparks. Liz was with me when I had Jessie all those years ago and Jessie lived with her for awhile during college and Kati lived next door and became another beloved auntie.
Lily had stopped by the Dollar Tree for balloons and Owen had made a poster and we all made a tiny parade down the road and onto Jessie's road where we found her and Vergil and the boys outside, Jessie absolutely surprised.
She cried.
We drove around the block twice, honking horns and yelling "Happy Birthday!" and then we all got out and Rachel gave her cupcakes she'd made and there were presents and we mostly stayed six feet apart. I hadn't seen May and Michael in six weeks or more and I hadn't seen Liz and Kati in forever. 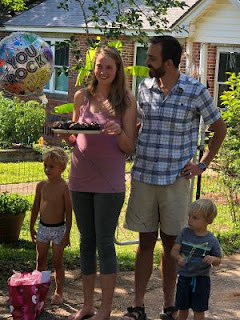 The boys were thrilled and I think Vergil was well satisfied. And you can see how Jessie felt. It was silly and it was fun. 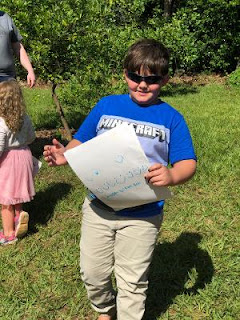 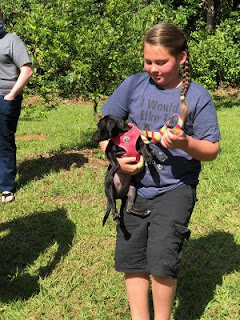 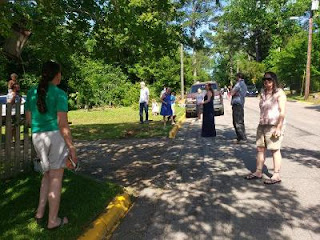 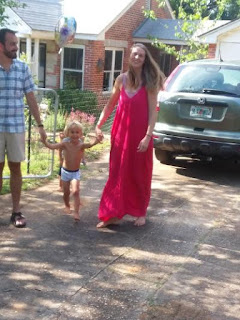 Jessie put on the dress that May had given her immediately.

And that was our party for Jessie this year. We all sang happy birthday and talked about how much we longed to hug each other and how incredibly hard we're going to be hugging soon. I think that someone said that Motrin will be needed.

And then we all left and Mr. Moon and I stopped at Publix where I had to pick up a prescription and buy necessities like chocolate milk and beer and ice cream and asparagus.

I cannot possibly imagine a time spent in this mostly-quarantined way which could be any better at all. Not one bit. And I got to see my loved ones.

Thank you, Hank, for organizing and planning this party parade. I think you made your little sister very happy. And you gave us all an opportunity to meet up and love each other, even if from a distance.

There is no shortage of love. And as Levon pointed out today, sometimes the bumpiest rides can be the most fun of all.