I've been as cheerful today as a bluebird or, well, maybe a slightly bitchy mockingbird but all-in-all, it's been a much better day. I only walked three miles this morning which probably made a big difference. The air was so full of water that it was almost raining- spitting down tiny eyelashes of drops, not enough to wet the ground but enough to create a humidity situation that was almost unbearable when combined with the heat.
I took a shower as soon as I got home and that helped. Jessie called to see if she could come out with the boys. She's going a little crazy trying to keep them happy at the house and she was ready to pick out the chickens she wants to take home. Mr. Moon and I are going to have to get them on the roost while they're sleepy and docile and keep them overnight in a dog kennel to take to her. Catching chickens is not something I want to do when they're fully awake and aware. Those little birds can run fast and, as I always say- they can fly if they want to. Plus, it traumatizes them so best to just pick them up at night while they're drowsing.
I made chili and it's been simmering for most of the day. I picked another gallon of green beans and looked up recipes for dilly beans. I located some canning jars and I think I have enough spices in the freezer and vinegar in the cabinet to make getting the canning kettle out worthwhile. My goal for tomorrow is to make those.

And then Jessie and the boys arrived and Holy Mother, I have sinned. I let them come in the house. Okay, I asked them to come in the house. And I let the boys play in the Glen Den and we interacted and I read books to August. Oh hell, we even-pretend talked on the phone to Boppy on one of the old plug-in phones that I keep around in case of power outages. The same phone.
I'm about as successful at keeping socially distant from the kids now as I was at the age of seventeen at not having sex with my boyfriend.
That's not just a funny thing to say, either. It feels that powerful. Remember what it was like to ache with longing for what we'd been told over and over and over again was evil and dangerous? It's like that, except not evil and somehow, even when we were teenagers we knew that sex wasn't evil if it was with someone we loved or thought we loved and it was consensual. So very, very consensual.
But yes, it was dangerous, especially in those times when contraception was hard to get although I doubt that it's exactly easy now.
And I know that being this close to anyone can be dangerous but I ache and I long to let them come to me and ask me to help put a toy together, to get closer and closer on the couch as I read a book to them. 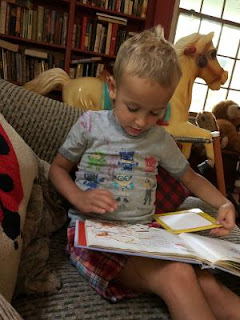 August's haircut is very short and he has those Audrey Hepburn eyes now. 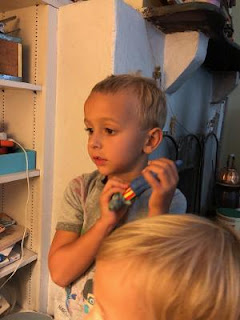 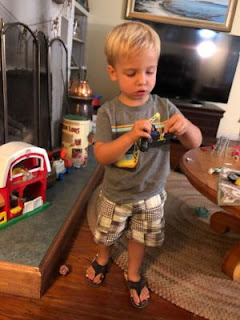 Jessie cut Levon's hair and it's a more normal cut. Shorter, but not quite so shocking.

So we did all of those things and August wanted to play a CD so I let him. He picked out his mama's band's CD which is his favorite. He showed me his dance moves which mostly involve running up and down the hall and doing fawn-like leaps and fancy kicks. While he was doing that, Levon was outside with Jessie, picking out which chickens she wants and pulling the old rusted, busted wagon around.

When it was time for them to go I gave Jessie some of my chili and also some sourdough starter. I showed her how to feed it. She had brought me a prescription that needed picking up and also some beer. Pandemic trades. Actually, I still owe her.

It has been raining on and off all day. It's sprinkling now but with constancy. The frogs are singing in joyful celebration, the garden is sucking up what it needs.

Beloved Grady Doctor has just posted for the first time in a long time. I think we all need to hear what she has to say. Go HERE.

Y'all be safe. As safe as you can.