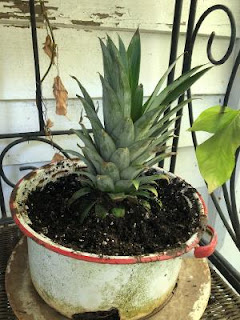 I did not walk this morning and I consciously chose not to. I think it's good to take a day off. I'll get out there and push it again tomorrow. I didn't even leave the yard today and that felt good. You'd think I'd be getting bored with my house and yard by now but I am not.
Last week I bought a pineapple in its own flesh, mostly because I wanted the top to plant. I have a pineapple plant that I stuck in dirt years ago and it appears to be happy enough although it has certainly not been happy enough to deliver unto me a baby pineapple. 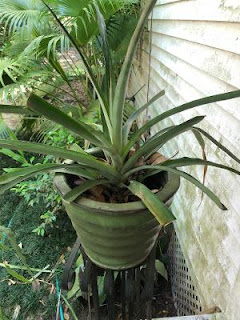 I'm sure it needs more sun.
But one of the things I did today was to peel and cut up the pineapple I'd bought and I stuck the top in some dirt in an old enamelware pot that's been here forever. I think it may have actually been a diaper pail. Not sure. It's got rusted out places in the bottom now but it'll work for a bromeliad which is what pineapples are. At least for a time.
Lately I seem to be slightly obsessed with rooting and planting things. I know. I KNOW! I have discussed this before.
But quite honestly, it's true and besides that, the pineapple was sweet and delicious. You get so much more out of one when you peel it yourself. When you buy those pre-peeled ones in the plastic containers, they've been cored and peeled to a specific standard and I think a lot of the goodness is wasted.

I suppose the main thing I did today was to call the Leon County courthouse and arrange to have a copy of our marriage certificate sent to me. Mr. Moon and I have both looked upstairs and down and all around for the original and like I said, I found my first marriage certificate and Glen even found his parent's marriage certificate but we haven't been able to find it. It turned out to be very easy to order a copy and indeed, it would appear that we are legally wed and have not been living in sin for the past thirty-five plus years although I suppose that truly depends on your definition of "sin".  I like to think that we are indeed a little sinful, at least some of the time.
Once I had finished that small but anxiety-producing task I felt as if I had done enough work for one day but I did go outside and weed out yet another kind of invasive non-native plant, this one on the south side of the enormous, aged live oak in my front yard. I remember when we were looking at this house before we bought it and I was talking to the girlfriend (now wife) of the man who was selling it and I asked her what that plant was. She didn't know the name but she was quite sure that it was rare and precious.
Haha!
I knew the name for about ten minutes last year but I've forgotten it. Pulling it was easy work although I know I've left a thousand roots behind and it will sprout again. I pulled some of the horrible beauty bower and a few other noxious weeds as well including dewberry which never fruits and Virginia creeper. I hope I don't break out in poison ivy in a few days. I think I saw a little bit but maybe not. And then I finished pulling up the mondo-grass/croscomia/chenille plant trio of evil near the hydrangea where I'd been weeding although "finished up" is definitely a lie as those things will never be eradicated. At least in my lifetime.

And so another day. Once again I have neither found a cure for cancer or written the Great American Novel.
Hell, I haven't even READ a great American novel today.

Well, maybe tomorrow. After my walk.

But whoa! I forgot! I did plant a begonia in a gourd! 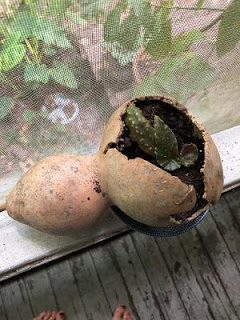