Mother's Day In The Pandemic 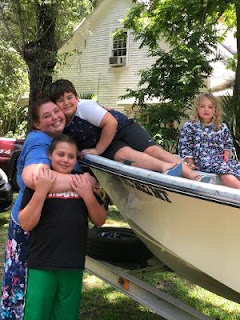 Last week I texted my kids and said that as far as I was concerned, Mother's Day for me was cancelled. I know they love me, they know I love them. That is enough.
But dang, those sweeties!
I got a card in the mail yesterday from Hank and Rachel that just about made me cry and this morning May called me. Then a little while later I was surprised by that crew up there who came bearing cards and rice candy. Pepper was here too. 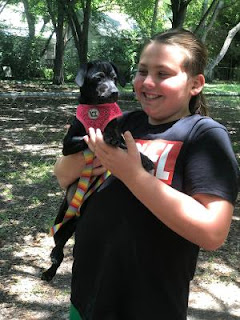 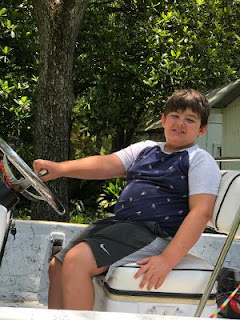 Captain Gibson at the helm!

We visited for a little while and then they were ready to go home and watch a movie with their mama.
Next came Jessie and the boys. 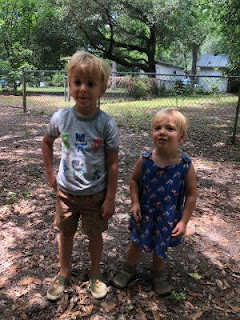 They brought me a cookbook and a gift that they'd made me which means the world to me and did make me cry. 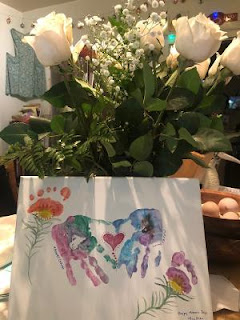 And Mr. Moon brought me flowers from town yesterday. Handprint heart, footprint posies, and white roses.
I'm a lucky mama and grandmama.
When I unwrapped that pretty picture August asked me if I liked it and I said that I liked it so much that it made me cry. I think he was embarrassed for both of us and immediately turned to his Boppy for some manly cart riding. Here they are sitting on one of their grandfather's benches, waiting for him to hook the cart up to the ATV. 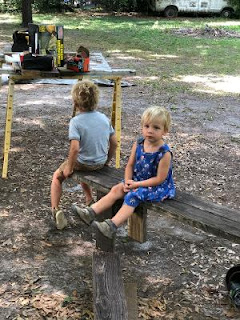 I love the way Levon was just swinging his legs. Later on, when the cart got unhooked, he pulled that thing around the yard for about thirty minutes. He is the most determined worker, age two, that I've ever seen. 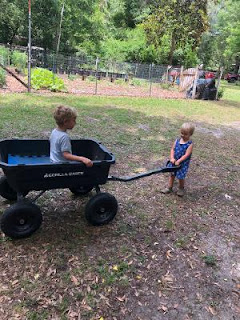 By the time they'd said their good-byes, it was getting on in the afternoon and I had promised Hank to make a friend of his some masks which I did and then, BOOM! It was five-thirty.
Where did THAT day go?

A fine day and it would only have been better if I could have hugged every one of my babies and grandbabies. Owen talked today about having a big party when all of this is over to catch up on the birthdays and Mother's Day and Father's Day.
May it be so.

Mother's Day can be one of those tricky holidays, I think. It's hard on women who always wanted children but for one reason or another never have. It's hard for mothers whose children aren't there to celebrate with them for whatever painful reason. Or even joyful reason. It's hard for people whose mothers are or were uh, shall we say...difficult? It's hard for people whose mothers are no longer here and who are so sorely and eternally missed.
In other words- it's like every other damn holiday.
For some- a sweet and happy occasion, for others, a reminder of deep and primal pain.
But as always, I'd like to remind us all that we have ALL been nurtured by someone. Biological mothers, adopted mothers, foster mothers, aunts, uncles, siblings, teachers, neighbors, mentors, friends, spouses, grandparents, fathers.
And even our very own children.
And all of us have nurtured, too. Pets, lovers, friends, gardens, co-workers, grandparents, nieces, siblings, nephews, art, spouses, students.
And our own children. And our own parents.
The point is, nurturing doesn't mean a specific gender or an official title. It doesn't require giving birth or signing a document.
Nurturing is human and it is animal, it is gentle and it is fierce. It is primal and it is ethereal. It is the most private, personal thing and it is as universal and vast as the way we feel when we see the ocean, the mother of us all.
It can come naturally and yet not always, and even when it does come naturally, it can be the hardest damn thing in the world. Especially to get right.
So hard that none of us really get it right. Or at least as right as we wish we could.

As with my tears and August today, I've probably now embarrassed all of us.
And I don't care.