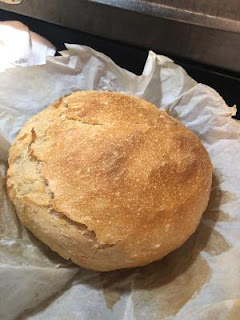 That was last night's sourdough loaf and it may have been a sin to use the food processor in the making of it but I have to tell you that it was the softest, loveliest loaf I've made yet. Same ingredients, too. Flour, water, starter, salt. Some of the flour was whole wheat. Just a very fine loaf of bread. It was a good supper all the way around but I think my favorite part of it was the salad.
I'm not even kidding.
All it was made of was arugula from the garden, a little bit of very thinly sliced kale from the garden, salt, pepper, olive oil, white balsamic vinegar and a few shavings of parmesan on top.
It was simply and utterly perfect.
You know how you save your favorite thing in the meal for the last bite?
Mine was of that salad.
I'm planting more arugula. I have come to that particular game late in my life. Have only been planting and eating it for maybe eight or so years, but it is my favorite. All of the other salad greens are jealous of arugula. They won't tell you that, but they are.
And it will limp through the summer when no other green here will. I'm just going to keep planting it and take what I can get for as long as I can get it.

So. I saw a pretty little gopher tortoise on my walk this morning. 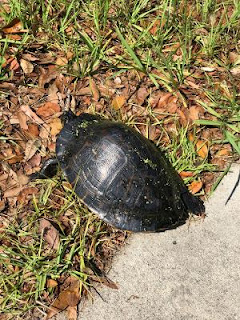 I think it was exhausted from crossing the road. At least it made it across. Seeing a tortoise always cheers me and makes me feel a little blessed.

I met a guy named Pops on my walk. He told me his real name but said that everyone just called him Pops. We had actually met before. He was in a chatty mood. The problem is, he has such a thick patois that I can only understand about one in ten words that he says. Plus, he's a FAST talker. But we managed to have a conversation. He grew up right here and knew and knows everyone. I think he listed every person that's lived within a mile of my house for the past fifty years but I'm not sure. We talked about when a woman named Miss Ruby had the most wonderful country store on the corner and how very kind she had been. "But she was strong!" I said. "I remember she had a sign on the cooler that said, 'If you break a six-pack I'll break your arm!'"
Pops laughed about that.
I finally said, "Well, I need to get to the post office!" and he said, "Well, I'll let you go!"
At least that's what I think he said.

After I got home I took a shower and decided to do my semi-monthly shopping. And so I did. Lord but people can be oblivious. There were two older (even than me) couples who appeared to need to check out every item that they were thinking about purchasing with minute detail. I would stand at the end of the aisle with my cart, sighing and waiting, waiting and sighing, for them to get on with it. How much do you need to know about toilet bowl cleaner? Get the cheapest damn one with bleach in it! Done! Move along!
As I told a friend today, I am a martyr waiting with my cart for people to finish taking up the entire aisle. I stand and sigh and sigh and stand and you know what? They don't even see me. As I said, oblivious. So all of my sighing and eye-rolling is for naught and people are going to study the toilet bowl cleaner for as long as they feel like studying it.
But I got through the ordeal and then I went to Costco where a man left his cart right in front of me in an aisle by the tomatoes, IN THE MIDDLE OF THE AISLE and walked into the coldie room to get his box of strawberries. "You did not just do that," I thought as I had to back my dinosaur-sized cart out of the aisle to go into the coldie room myself.
Not a big sin but why do people have so much trouble recognizing the presence of others?
Who knows?
Not me.
I survived.

And then I came home and unloaded everything and put everything away and picked about half a gallon of green beans and two more squash and now it's time to make dinner.
Yes. I am food obsessed.
I was able to find King Arthur flour today but only all-purpose, not bread. That's all right. Also, I searched Costco for yeast which they have been having regularly. I don't need any but two friends do and I was going to send them some.
No yeast to be found.
I could have bought fifty pounds of bread flour though.
I did not.

These are the days of the pandemic. We are doing well-ish. Last night I fell into a deep anxiety and was so very afraid that I was going to be stuck there. I honestly think that I have PTSD from years ago when I had anxiety so bad and had no idea what was going on and it came close to killing me before I finally got help and medication. But I took an Ativan and went to sleep and woke up this morning feeling pretty good. I am so damn thankful for that I can't even begin to say.

And many other things as well.
Sorry I haven't been answering comments. Somehow I've been busy and part of that has been dealing with this spam which is still completely crazy.