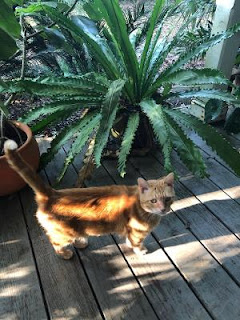 For a little while this afternoon our internet went out and strangely and oddly and unexplainably (to me) our cell reception went to almost nothing at the same time. This was disturbing in that the internet and the cell reception should have nothing to do with each other at all and yet...there we were. My neighbor reported that her cell reception had also gone down and she has a different carrier. Her internet was out too but we both use Century Link so that wasn't as mysterious.
Weird.

You know what I did today?
Whatever the hell I wanted.
I walked on Whitehouse Road. 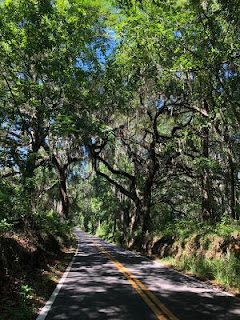 I bet I've posted a picture from that same exact spot at least a dozen times but I tell you that it's so much more beautiful than the picture even begins to show that it is almost impossible not to stop and try to capture it. I walked a little more than four miles but Whitehouse is so much more hilly than Old Lloyd Road where I usually walk that it's a better work-out. And I had a pretty good pace going, mostly because when walking up hill my theory is that the faster I do it, the sooner it will be over.

Beyond that walk, I've done little else except to think about how precious this time has been and how anxious the idea of life going back to "normal" makes me feel. And having THAT thought makes me feel incredibly selfish. But fuck- I didn't cause the Coronavirus and my pure joy in these last few weeks of having no responsibilities and no obligations has been an absolute miracle in my life.
I have not taken it for granted. Instead, I have drenched myself in the goodness of it. The sweetness of it. The opportunity to be able to slow down enough to appreciate the minute-by-minute mundane beauty of it all. Even not being able to hug my children or grandchildren has reinforced my knowledge of how much that touch, that physical demonstration of love means in my life.
It's also given me time to take care of the new chickens, to walk as much as I want to, to be close to my husband and to find out that yes, we love each other even if we're together all the time and not on vacation in Mexico.

The church next door has gathered again. I hear the drum and the singer wailing. The other day when I walked past it there were four pairs of shoes in front of the front door and I wanted to take a picture and title it, "The Rapture Has Happened."
I did not.
I am sure that the shoes were left there because cleaning was going on.

Today is Jessie's birthday. Here's a picture she just sent to the group. 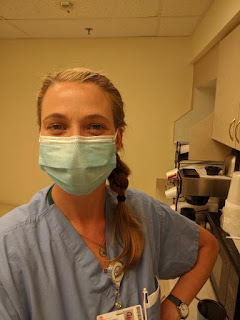 I think that she has probably been so happy to be at work today. When you're a full-time mother, going out into the world to a job can be a break. Isn't she beautiful in her nursing scrubs? I am so proud of her. Of course I've spent all day thinking about her and her birth too. I've written about it many times. How it was my fourth birth, my third home birth, the rain, the magnolias blooming, my brothers all being with me, my friends who were there, cooking and taking care of Hank and May and Lily, my midwife who had been with me for all of my births, the rainbow that appeared in the sky right after she was born, the joy and light she brought with her and which she has filled my heart with since that moment thirty-one years ago. Not to mention the gifts of two amazing grandsons she has given me along with the son-in-law she chose for her daddy and me who sired those boys and whose influence I see in them and celebrate all the time.
The other day when I was reading Levon and August the beloved "Duck in a Truck" when we got to the part where the duck drives the truck into the muck and gets stuck I said, "Oh, no! How is he going to get that truck out of the muck?" And Levon with the most pragmatic voice on the planet said, "With a trackhoe."
I never want to forget that.

Well. I better make supper before my martini kicks my ass into complete incompetence.