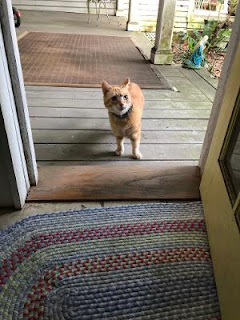 Sometimes when I get up, Maurice meows at my bathroom door which is one of the seven doors in my house which open to the outside. Our bedroom also opens up onto this little porch which is what I call my swing porch because, well, that's where the porch swing is.
I opened the door but Maurice just wanted to say hello, not actually come in. So we greeted each other and then we both went about our separate activities.

I walked five miles today but on Old Lloyd Road which in some ways is easier than walking four on Whitehouse. At the halfway point I walked down a beautiful shady dirt road that I've passed hundreds of times but have never driven or walked down before. I didn't even get to the end of it but I must have been close because that road runs perpendicular to the interstate and has to run into it at some point. There's an old church at the corner of the road and Old Lloyd Road and I think it may still be in use. 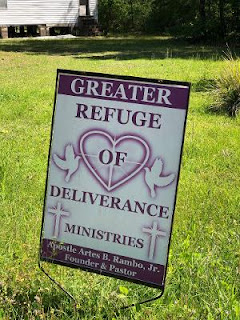 I'm not sure I've ever seen cars there.

There were woods on both sides of the road and a beautiful property that I couldn't really see due to fences with great bouts of jasmine growing up them but I could glimpse a very lovely garden and other plantings, out-buildings galore.
I noticed this up in a cedar tree beside the fence. 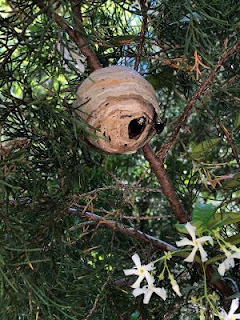 A beautiful wasp nest and the jasmine has grown up into the tree. It was a moment of peaceful delight, stopping and taking that picture. I loved walking down the shady road. I felt as if Marjorie Kinnan Rawlings' books could have come to life right there beside me and that I might see Jody and Fodderwing walking barefoot through the thick sand, one of Fodderwing's rescued critters on his shoulder or even Flag, the baby deer trotting behind them.
But no. I didn't seen anybody although I did see a few styrofoam take-out containers which sort of broke the mood but could not entirely.

I came home and hung laundry and didn't do much else the entire day. I'm feeling so lethargic and at the same time, feeling as if I HAVE to take up something that will be of some use, or at least some interest. Mr. Moon has taken over the garden and I am somewhat relieved but also left feeling a tiny bit bereft. Still, I cannot argue with things like this. 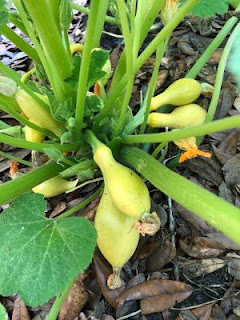 Would you look at all that squash? And that is just one plant.
So there is his garden with the very straight rows and the plants that he literally lies on his back underneath to inspect for pests and his buckets on his homemade benches filled with dirt and composted horse manure that he shoveled, one perfect plant per each and his beans climbing up the beautiful trellis he made and the earth boxes just starting to show us what they can do and I can't help but feel inadequate.
He even takes the trash now and who could complain about not taking the trash and believe me, I'm not but that's something I've been doing for sixteen years now and no, I don't miss it but I'm not doing it.

I did fix up a few more pairs of overalls and had to watch the buckle-strap video at least ten more times. I'm not even kidding.
Oh well.
And of course I'm still doing laundry and other basic things although I have not yet resorted to filling my time with actual cleaning. Sweeping, wiping down counters, the occasional lazy dusting of a piece of furniture- sure. But I am a consummate professional when it comes to ignoring mildew and dirty baseboards and windowsills and pollen-covered porch furniture and we won't even discuss window washing.

I suppose I'm just having one of those days.

On top of everything else my husband has pleaded with me in the sweetest way possible for me to have supper ready earlier. We have been eating late and it makes him uncomfortable when it's time to go to bed. This requires that I change up my entire late afternoon schedule (right? haha!) but no honestly, I am a rigid person and there is no denying it. I hate eating before it's dark. It makes me feel like a child. And what I like to do is to have supper, clean up, take a shower, and get in bed to read. This is one thing if that means I'm in bed by ten, quite another if I'm in bed before nine.
I just don't have the patience to watch TV which I suppose is what you're supposed to do as an activity after you eat.
Sigh.
But honestly, this is a matter of health and happiness and I can hardly refuse him an earlier supper. I'll get used to it.

Tonight we are having what we call Anne-Helene's shrimp salad. Anne-Helene was a beautiful woman from Norway we met in 1989 in Cozumel who ended up coming to live with us for six months. It was absolutely one of the best times of my life. She helped me with Lily who was two years old and she did some cooking and she was such a wonderful friend to me and to the whole family, really. It was a hard time in my life as my husband was running a new business and was gone twelve hours a day and Lily was not an easy child and I had an eleven-year old and a thirteen-year old and I was trying to work at a local birth center on top of it all.
She kept me sane.
She would say, "Come on, Lily, let's go to the mall," and they would walk there. It was probably two miles away but Anne had no problem with that and no problem in believing that a two-year old could manage it too. They would sit on the back steps and listen to reggae music which Anne loved and Lily would dance and be happy and when all of us adults would go out on a Friday night, the men in the bar would almost fall over backwards seeing this beautiful blonde six-foot tall woman walk in.
And she would sometimes make the best shrimp salad and that is what I'm making tonight. It has shrimp, of course, greens, a little bit of pasta, and avocado, tomatoes, some corn, boiled eggs, and cheese, and I make a dressing of Heinz chili sauce mixed with mayonnaise and there are few things better on this earth.
The eggs are boiled and cooling. The pasta is cooking now and when that is done I will cook the shrimp and will have used one pan for all three of those things.

It is a beautiful evening. It has, in fact, been an amazingly beautiful day.
Three of the teen chickens are walking along the top of the fence in front of the hen house. I have no idea why. Mr. Moon and I watched Miss Pansy doing the same thing this morning and we both declared that she should be in the circus the way she so carefully put one foot in front of the other like a tightrope walker high above the crowds. Another hummingbird just came in to the feeder and that reminds me that I need to replace the sugar water tomorrow. I don't want to make any of these tiny birds sick.