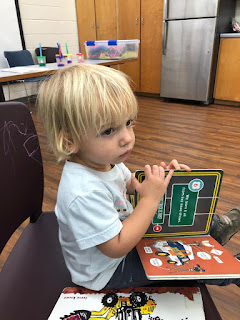 Lily and Jessie and Lauren and I along with the three little cousins made the drive to Monticello today for our favorite story hour. I absolutely love it more than anything. It is truly the essence of sweetness and simplicity and books are involved and crafts and the beautiful little children. Today there were only five kids including our three but that was just perfect in a way. They all sat quietly and attentively and listened to the sweet stories and sang the sweet songs and chimed in with comments when they felt the need which was perfectly fine. Levon, who was not sad in the picture above, but attentive, announced that he has two dogs. Or maybe it was four cats. I can't remember. See those two books he has? He had checked them out a few weeks ago and I returned them last week and that little guy searched through the books in two different rooms until he found them again.
The arts project today involved paint and a bunny stencil and Levon insisted on keeping the same color paint and not sharing it for his entire project. It was a sort of pinky-beige. That kid loves pink. Pink, pink, pink.
Speaking of pink. 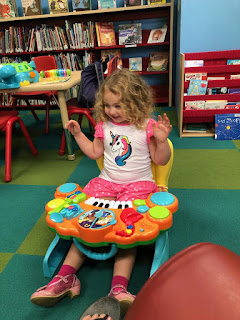 Here's the pink princess herself. Check out the shoes. These are all clothes that were handed down to her and of course she loves them. She was giving us a little concert and I wish I'd gotten a video when she just couldn't contain herself and got up and started dancing. Those dance classes are paying off! She was improvising dances like crazy and she can kick as high as her head!

I don't know why but I didn't get one picture of August today but he was as fine as ever. He is in love with the computers in the kid room where he plays games like "name the body part." Jessie and I agreed that it was a pretty difficult game and that although we surely learned all of those body parts in nursing school we forgot a lot of them as soon as we'd taken the test.

Mr. Terez and Ms. Courtney were as gracious and attentive as ever. Ms. Courtney says that her little boy loves pink too and that actually, at the moment, he has pink hair.
We just feel so at home in the Monticello library and once again, I found a fairly new book to check out. Elizabeth Gilbert's City of Girls. I never really thought much about Elizabeth Gilbert's writing until I read The Signature of All Things which blew me away. So we'll see what I think about this one. Last night I finished the Alexandra Fuller book I checked out a week ago (Travel Light, Move Fast) and it was a hard one. As I read it, I kept thinking that it was somehow different than her regular writing. That something was off, amiss, not quite there.
When I got to the almost-end, I realized why and I'll not share that here. If you want to take that journey you don't need me to explain things. It was powerful in its own way. It shook me.

But. Back to today. And fun.
We went to the Rev, of course, and the kids played with the blocks and we all got delicious lunches. I got a salad with everything from greens to almonds to sunflower seeds to tomatoes to chicken in it. It was so good.

And then we went our separate ways. Lily and Lauren took me home but before we left the parking lot at the restaurant, I kissed the little boys goodbye and Levon told me that he was a green back-hoe, no, no, he was a YELLOW backhoe and I tasted his backhoe toes and then I had to sample August's Brazil nut toes. I told him that he doesn't have cashew nut toes anymore because his toes are so big now. He liked that. He loves the idea of getting bigger. On Sunday morning when I was serving up breakfast, I told him that I was not going to give him a kid's plate but instead, a regular grown-up plate because he was getting so big that he needed a lot of pancakes. He told his Boppy about this and was very excited. "Guess what? I'm getting a grown-up plate because I am so HUGE now!"
He is certainly huge in my heart.

Almost as soon as I got home I left again. I was already in my town clothes including a bra-like garment and I needed gas from Costco and groceries from Publix. I am so very, very proud of myself in that I forgot my list and yet managed to get everything on it. Well, okay. That's a lie. I forgot one thing. No Big Deal. I sometimes forget something when I HAVE my list so I was doing quite well.

So it's been a full day. Mr. Moon's at a basketball game and the house is quiet. The chickens are up, Maurice is on the table here on the porch with me, grooming herself.
There's a whole lot going on in the world. Hell, there's a whole lot going on here, some of which I'm not really at liberty to talk about yet.
But I suppose that truly, all I can say is that life really is what happens while you're busy making other plans (thank you, dear John Lennon) and thank heavens for libraries and books and people who care about children and for our imaginations which allow us to be yellow back-hoes or to believe that we are HUGE and for being able to dance and kick and tap and twirl, for delicious foods and for being able to laugh and mostly of course, for love.

I think that'll do it for tonight.