A Touch Of The Crazy 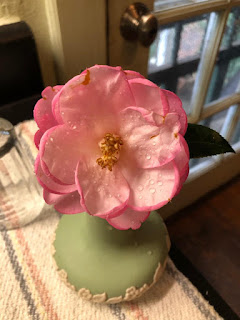 I found that gorgeous camellia today and I was so pleased. I swear, it may be edging out the Pink Perfection as my favorite. It's so delicate, so seashell-like. I've tried to identify it but have not yet succeeded. I'm going to keep trying. It rained last night which makes the blossom even more beautiful with those droplets upon it. Planting all of the camellias I have planted in this yard has paid off tremendously. I can't imagine going through winter without these beauties to pick and bring in to brighten my hallway and kitchen. And they are finally, after at least fourteen years, growing quite large. They do fine in all the shade I get in my yard which is a small miracle.
And after I'm gone, I hope that subsequent owners of this house and yard will enjoy them and appreciate them just as I appreciate and enjoy the azaleas that were planted in the front yard although there are many different plants here that are the bane of my life, being invasive and impossible to get rid of.
NOT MY FAULT! I want to tell the people who live here in the future. Mary Moon did not plant those horrible things!

Eh. It's been a day. After I discovered the camellia I found that another hen had been murdered in the night. Mr. Moon and I searched the coop to see if we could find where the predator was getting in and we did and my husband spent a good two hours replacing wire and wood and making things secure again. We thought at first that we'd lost two hens, including little Ms. Violet, my oldest hen, the banty who has survived so long with her wily, fast ways. We found feathers that could have been hers and she was not in the hen house this morning although she was last night when I shut them up.
BUT- she appeared later in the morning, running from wherever she'd been hiding, to beak and peck at the corn scratch and the little survivor even left us one of her small eggs today. I guess that the animal who took the other bird (and we did find the body outside of the coop) managed to drag her out and she escaped. She looks fine, bless her tiny little brave heart. I suspect a raccoon because they, too, are wily and smart and they have those clever hands that can pull wire and those smart brains which can make and carry out plans.
Anyway, the sight of another chicken death made me sad and I felt resigned this morning to bloody nature and the impossibility of keeping all of my chickens safe. I just couldn't shake my sadness, my despair. Some days I don't have a clue as to what I'm supposed to be doing but as I get older and older, I hate the thought of giving up and just going along as always, letting the things that I've always dreamed of doing slip away into ennui and anxiety and fear. And so I did more laundry and I scrubbed toilets and I finished cooking my beans and then I mulched the garden with bagged leaves that Mr. Moon had collected yesterday in his truck while he was in town.
I always feel a bit iffy about using someone else's labor to shortcut my own labor but really, where's the downside? Taking bags from the front of someone's yard which they have lined up and ready for the city to take to the dump is actually doing everyone a favor, including the planet. They won't be taking up space in a landfill and will enrich my soil and hold in moisture and help with weed control here. It's hit or miss as to what you'll find in these bags but today's haul was fine. Mostly leaves of various trees, a few cuttings from cypress but not too many and very, very few sticks.
Best of all- no dogshit or trash.
There wasn't enough to cover the entire garden but there was enough to fill in the spaces between the rows of what I've planted and a little more. I might actually have to get out and rake and haul our own leaves to finish the rest but that, my friends, is a lot of work.
We shall see.

And then I dug up a rose that needed more sun and I planted it in the garden by the gate. I cleaned the nests in the henhouse and put that hay with its bounty of chicken-produced fertilizer around it. Fresh chicken shit is too "hot" to use as actual fertilizer but I've never found it to be destructive if I keep it from actually touching roots or plants. It will break down with the hay.
That's my theory, at least.

And then I came in and read and napped. I just couldn't do any more than that. I don't know what's made me so sad. I'm not angry or especially worried about anything. It's just felt like a Sunday, one of those days with overreaching, nonspecific sadness.
It'll pass.

After I woke up and took a shower I felt a little better and then I got call from Jessie's phone but it was August. And Jessie. I was so happy to hear from the little guy. "How are you feeling today?" I asked him.
"Good!" he said. This, for August, is a strong declaration.
He told me that his mother had taken him to the doctor who "fixed me all up."
I told him I was so happy about that and we discussed what his medicine tastes like ("It's supposed to taste like bubblegum") and what color it is (white- I guess they've quit dyeing it that lurid color of pink) and how they picked aphids and washed the leaves on their lime tree today. He also informed me that he needs to come for a sleepover soon.
I agreed! However, I told him that it would be best to wait until we get our heater fixed.

Well, that's another story, isn't it?

Meanwhile I was absolutely delighted to get to have a conversation with August and even more happy that he had wanted to call me. He is growing up so very fast.

Mr. Moon and Vergil are going to cross the bay tomorrow to Dog Island to begin preparations for rebuilding/restoring. We've decided that dammit, we own a piece of unique and irreplaceable Florida and it's ridiculous to have it sit there unused. Our partner in the house is very ill and I think we're going to buy him out and the plan is to finally fix the things that need fixing. This would include a well, a pump, replacing flooring and getting rid of the 1970's shag carpet, replacing a rotten deck and stairs up to the house, putting in a new stove and oven, and god knows what else. Oh yeah, replacing the plumbing in one of the bathrooms so that the shower and bathtub there are operable.
Not simple. Not easy. Especially on an island where the only access is by boat.
I think we're going to actually pay for some help which is unheard of for Glen who can handle almost anything from carpentry to plumbing but the truth is, neither he nor Vergil have the time to spend on it. But they're going to go out tomorrow and get a fix on the situation and begin the process.
I'm excited about that. I know I've had my problems with going to Dog Island. There's the poltergeist and the PTSD from visits past including one where it may not have been a good idea for a woman in a horrible state of anxiety to try and fix herself with a solo week-long visit there.
But we've had wonderful times on the island in that little shacky place and now, as Mr. Moon points out, we can go there together for days at a time, not just the occasional weekend, and I am longing to do just that.
Hell, maybe we'll even replace the horrible ancient couch and chairs.
It could be a project. Something to work on, to plan for, to look forward to.
Just what the old woman needs, right?
And maybe the poltergeist is ready to make peace with me.
I hope so. It's such a treasure and one that would be like nothing else on this earth that we could leave to our grandchildren.
If you want to learn more about Dog Island and our experiences there, do a search for it at the top left corner of the blog. I've written reams. And there are many, many beautiful pictures of a Florida that few get to see.

Good Lord. I've rambled enough. The white bean chili is simmering. Last night's sourdough loaf is ready to be sliced and heated. The wind comes and goes bringing more cold air. There is another episode of The Marvelous Mrs. Maisel to watch.

If you've hung in this long, you're marvelous too.