Vergil, We Wish You Were Here! 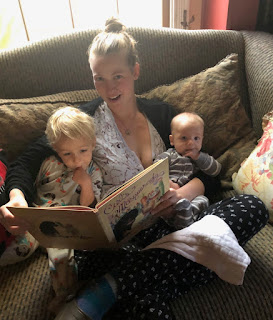 This is the scene that greeted me this morning when I got up. Two brothers, listening to books. After awhile I took over reading out loud and I bet we read ten books at least, this morning.
That was about our main activity although August did help me feed the chickens and let them out of the coop. We fed them corn and cornbread, both, and as we crumpled up the stale bread, I thought to myself, "Jeez. It's like we live in the nineteenth century here." 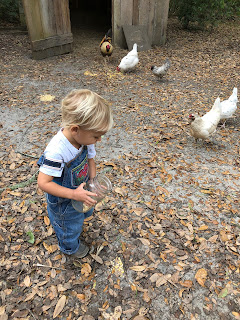 Next thing you know, we'll be waterin' the horses and sloppin' the hogs.

Not yet, though. Not yet.

We went to town and had lunch at Japanica and then went to Publix. I needed things to make Rachel's birthday cake as we are all meeting up at our favorite place, El Patron, for her birthday celebration tomorrow. As soon as we got home from the store, the boys took a nap and I drove to Owen and Gibson's bus stop and picked them up and took them home where Maggie cried her little eyes out when I left but she was mostly just tired and perked right up when a snack was mentioned.

Owen has recently started really getting into chapter books and I sure am proud of him for that. He also showed me some small white azaleas blooming in his yard. I loved that he had recognized that they were different and lovely, which he did. Maybe my grandchildren will keep some of me and what I've showed them as they get older.

I forgot to write down what Gibson said yesterday that made me laugh so much. Jessie and I were discussing who needed a diaper change and I told Gibson, "You're the only kid here who's not in diapers!"
"That's right!" he said. "Is anyone else here in diapers?"
Meaning me or Boppy or Jessie, I suppose. He was quite serious and of course his grandfather and I said, "Not yet," at the same time.

So it's been another kid-filled day and a good one. August is such a thinking boy and is constantly impressing me. His grandfather just said to him a minute ago that he was growing up to be a little man.
"I a kid," he corrected him.
Well, yes.

Levon laughs and laughs these days and sometimes he laughs as he's falling asleep. Jessie said that Vergil tells her she does the same thing sometimes.
Can you imagine?
I'd pretty much bet the ranch that I've never done that in my life.

I need to go help Jessie make supper. She's going to make us a stir fry tonight. Mr. Moon's back working on his bathroom and my cake is out of the oven.
Perhaps there will be some more hallway fishing this evening. 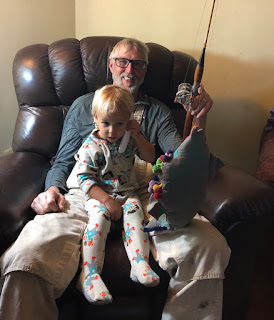 This was one of Owen and Gibson's favorite things to do with their Boppy. That stuffed fish gets tied to the line and taken out to the hallway and then reeled back in to the Glen Den. Last night Jessie and I were coming out of the dining room and saw that fish making its way down the hall with no apparent assistance and for a heartbeat, we were both stunned.
Then we realized what was going on and recovered ourselves and laughed and laughed.

Whole lot of laughing going on.