I woke up this morning in the depths of it all. Just purely puny in the spirit and the soul and I planned to spend the day in as quiet and reclusive a manner as possible and then I got a text from Jessie that she was taking Levon in for his four-month check-up and I was invited if I wanted to come.
I thought it about for a few minutes and then realized that if I was going I didn't have time to think about it so I just texted her back and said I'd come and we barely made it there on time but we did.
Here's the obligatory picture of August playing in the little play house. 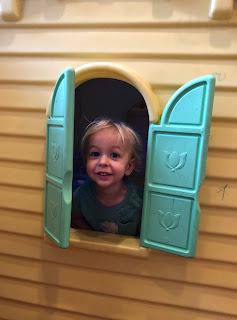 The kids all adore that thing. They can close the door and the shutters and they are in a different world. And then they open them and there's Mama and Brudder and Mermer! Plus there's a kitchen in it where they can make every sort of pretend food they want.
August made oatmeal and then informed us that he had to clean the kitchen.
What a good boy!

Turns out that Levon is happy and healthy. 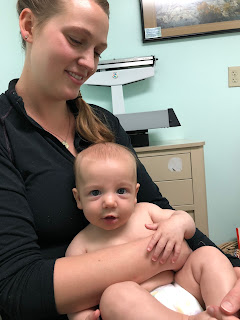 The doctor kept saying, "Any questions? Any problems? Concerns?"
And Jessie just kept saying, "Nope, nope, nope."
I got to hold him for awhile before the doctor came in and I nuzzled that beautiful bare skin. I took August out before his brother got his booster shots though. We may have traumatized the poor child when we let him watch Boppy get his Vitamin B12 shot and we didn't feel the need to traumatize him further.

And then of course we went to lunch because that is what we do and because I was in dire need of comfort food we went to the crazy stuffed animal decorated log cabin with the down home southern buffet. The best thing I ate was cornbread dressing and I'm not kidding.

Of course eating, even the most comforting of comfort food, is really and truly no lasting remedy for the blues and they are still settled around me. I have no idea why. It's been a beautiful day and I stole this picture of Magnolia from Facebook. 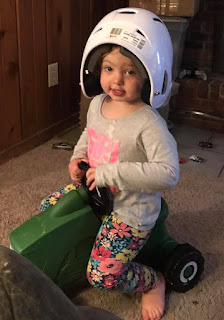 My Lord! She's like a grown woman already! We are going to have so much fun at Weeki Wachee.

And today is the second anniversary of May and Michael's wedding and it's been so sweet, going back through those pictures and reading my blog-account of it. You may read it too, if you want. It is to be found here.

Here's a lagniappe picture from that day. 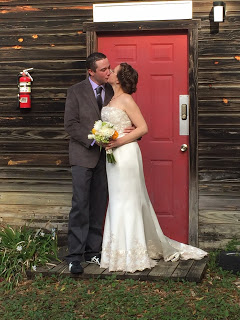 So it is what it is and I'm going to make more comfort food for supper, albeit healthier comfort food. Our soup that we love with the dumplings and ginger and noodles and greens and tofu and so forth.

Sometimes, for whatever reason, the memories and dreams of past lives just wash over you and threaten to drown you and that's why you cry- you gotta get some of that salt water out. It may leak out slowly, a sort of seeping weeping, or it may burst forth in huge gushing rushes of sobs and when this happens, I think it is probably best just to let it happen as it will.