I Believe Exhaustion May Have Overcome Me 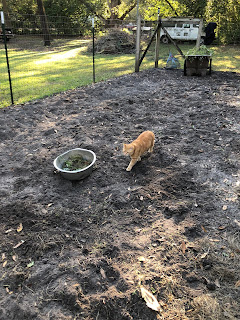 I have felt a lot better today and since it's been clear and cool, I decided to get out in that garden and weed the rest of the swath that looked like a meadow and I did it and my left wrist is going to keep me awake half the night but I don't care. I now have a cleared-out spot to plant my tomatoes or whatever else it is I want to plant there as soon as it truly appears that we've had our last frost.
Speaking of which, we're getting one tonight, quite possibly. 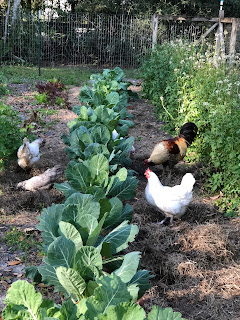 I had quite a bit of company in the garden as I worked which I enjoyed, of course. Jack actually came out and joined me for a bit but he mostly just wanted me to scratch and pet him which is completely the opposite of what Maurice wants when she visits me in the garden. She prefers that I pretend she isn't there at all, which I do because I live to please that cat. 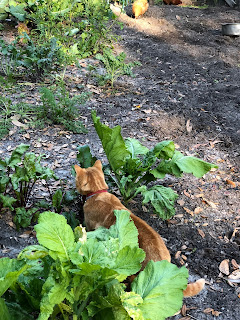 Here she is in the mustard green jungle, stalking the neighbor chickens who, after my chickens left, came in to scratch about. See her twitching tail?

And so that is what I did today and I am listening to yet another Outlander book; don't ask me which one because I can't count that high. But it's a pretty good one so far. I am enjoying the protagonists in their older life. They still have hot sex but not nearly as often and also, no one's been whipped in ages and ages.
How's that for a book review?

Okay. Let's talk about buying stuff. I am of the opinion that you do often get what you pay for and quality is something to consider in most cases. And let us not forget the pleasure factor. Not only does it feel better to sleep on good quality sheets but they will last a lot longer than crappy sheets that don't feel good to sleep on. Trying to use a cheap knife in the kitchen is a frustrating and messy experience whereas using a good knife that you can sharpen is a pleasure and actually safer and makes the preparation of meals far easier. Same for garden tools- buy a GOOD trowel if you use it a lot and no one wants a shovel whose handle and head are going to separate mid-thrust if you hit a root.
This is not always an issue. Take the plates you eat off, for example. I myself love to find interesting dishes at thrift stores and I don't care if they match or not. And what you can buy cheap at a thrift store does not reflect the original price or quality. This is where a discerning eye comes in.
The first espresso maker I ever bought came from a Goodwill. It looked practically brand new, was a Krups brand, and I brought it home and dang if that thing didn't work for years and years and years. I used it almost every day for my afternoon shot of caffeine. Turns out, according to Vergil, that that particular brand and model is highly sought after by home espresso-making people because it was a quality product which made a good cup of espresso as defined by people who know. I am not one of those people. I only want a shot of black stuff to drink at five o'clock to get me through the rest of the day when I am fading fast.
Finally, however, my little Krups bit the dust and I could have bought the part I needed on eBay but it wouldn't have been new and it would have cost quite a bit and I decided just to go out and buy a new espresso maker which turned out to be far more difficult than I had thought it would be. Those suckers are expensive! And I don't need or want one that can make two shots at a time and quite frankly, the whole milk-steaming-wand thing doesn't impress me because if I want milk in mine I just heat up a little 2% in the microwave and pour that into the espresso.
So, when I was at Publix the other day, I saw that they carried a fifty dollar Mr. Coffee espresso maker and in a weak and impulsive moment, I bought it. And as Jessie says, somehow we feel that we can rationalize anything that we can buy at Publix.
And it works. I am not saying it doesn't. It makes a shot of the black stuff that tastes as good to me as what the Krups produced but it just feels so junky to use. And it smells weird. Like a toasting Barbie doll or something.
Ah, whatever.
I just wish I'd not spent the fifty bucks and waited until I found a used one at a thrift store of higher quality.

So. Have you tried the newest ancient grain? (Oxymoron alert.) 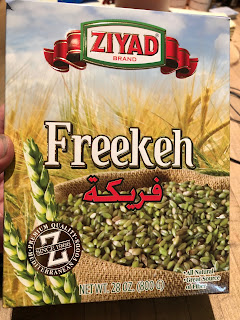 Turns out that it is young green wheat which has been toasted and it has more protein and fiber than quinoa. I bought that box at Publix the same day I bought the Mr. Coffee machine and I am going to cook some tonight to go with our soybeans. I think I mostly wanted to get it so that I can say, "Hey! I got my freekeh on!" when I cook it.
I'll let you know how it tastes. It is definitely the devil for those avoiding gluten because wheat pretty much IS gluten as far as I understand but I do not have Celiac disease and am of the belief that gluten is my friend so I'm not worried about that.

All right. It seems like I had something else to talk about but I can't for the life of me remember what it was. I am in the market for a new (or used) four-quart cooking pot but that's not your problem. And of course, I want a good one. I still use my grandmother's set of Revere Ware almost every day and that stuff must be about the same age I am and again- I am proving my point. Fuck shitty cookware because you burn everything you cook in it and if it's nonstick it's going to peel eventually and it is probably poison and then you end up just throwing it out whereas with things like my iron skillets and my grandma's pans, they last so long and work so well you have to put them in your will.

Well, Trump wasn't caught having sex with either a live goat or a dead trophy elephant in the oval office today so I guess we have to deal with him for at least one more day. Maybe tomorrow he will, though.
We can always dream.