Going On Vacation In Florida 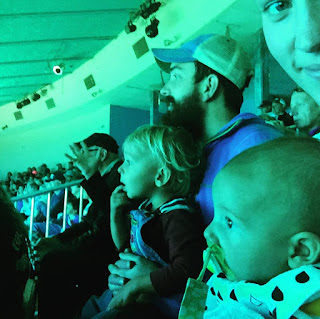 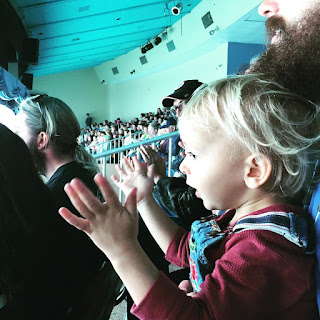 And the mermaids were magic once again. I cried. Oh hell yes I did. It was so beautiful, watching the little ones just absolutely mesmerized by everything going on in front of them. There is a lot of use of bubbles in the show and yesterday was so bright and the water was so clear that when a curtain of them rose up from wherever the magical place the bubbles come forth from, it was almost blinding. 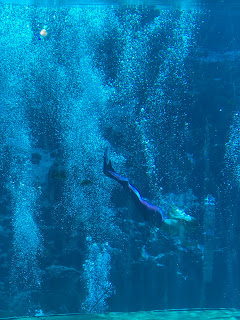 It is extremely hard to get a decent photo from the seats and there is no way that the camera can capture the grace and the seeming effortlessness of the mermaids (and the merman) but that was my attempt, right there. I was honestly too busy watching my grandchildren and their reactions and watching the show to take many pictures. Jessie took the first two above.
August was absolutely captivated. He clapped so hard every time the bubbles rose, indicating a scene ending and I don't think he took his eyes off the water for a moment. Magnolia was a bit tired and not quite as enchanted but she did watch. Owen and Gibson seemed to be extremely attentive every time I looked at them and Gibson told me he liked it but Owen insisted that he didn't like the mermaids AT ALL but then again, he is being a bit pre-teeny (mostly around his parents) and when I said, "Well, okay, but wasn't the water beautiful?" he agreed with great enthusiasm that it was. 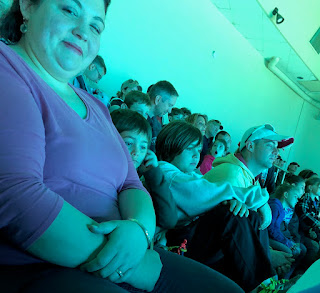 Jason and Mr. Moon and Vergil all said they liked it and I believe they did.

After the show we went to the wildlife demonstration which was, to be honest, pretty damn lame. A turtle, a tortoise, a corn snake, a baby alligator, and a wanna-be comedian were the entire offerings. The children grew bored. I was just so grateful it wasn't hot.
The next thing we did was a lot more fun. We got plastic mermaids that we were able to see being made in an original Mold-A-Matic machine. 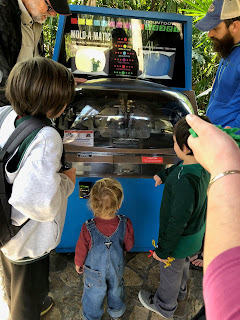 It was truly fascinating, especially for August who held his mermaid tightly for a long time and who could not stop talking about how it was made in the machine.

And then we did the photo ops and I will cherish these along with all of the others from all of the years past with the same props. 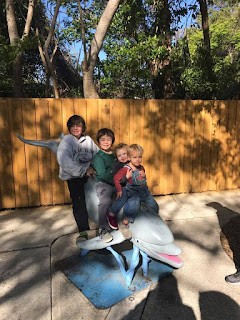 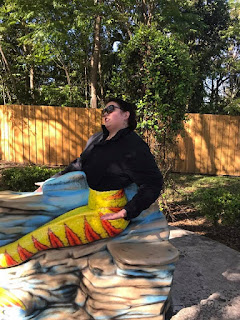 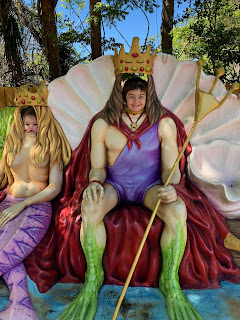 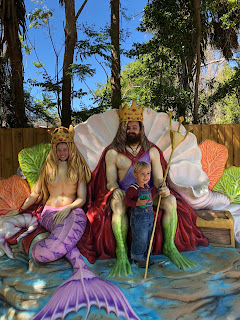 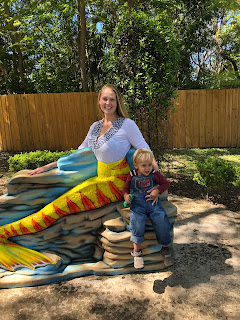 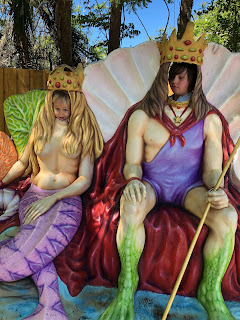 Also?
There were Dippin' Dots. 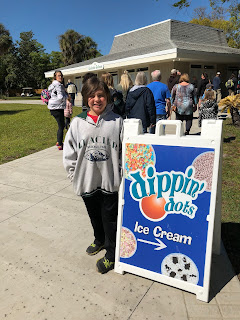 And a constantly happy Levon. 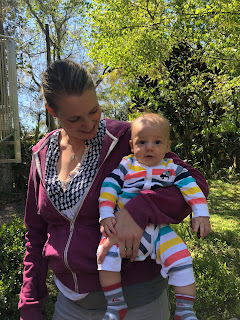 That afternoon it had warmed up enough that the kids all got to swim in the water park attached to Weeki Wachee and I know they had a great deal of fun but Mr. Moon and I decided to take a nap. Somehow, for some reason, we were exhausted.
And when everyone was finished swimming and sleeping, there was more shuffleboard and visiting in rooms and cocktails were consumed. If Vergil ever asks if you would like him to make a Dark and Stormy for you, just say YES! 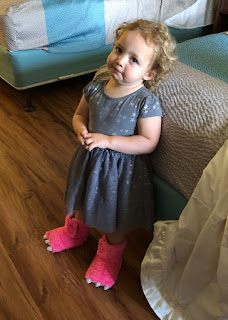 Maggie in her monster slippers.
Last night we all went out to supper at a sports bar because there appears to be something happening called March Madness which involves basketball and some of us care about these things. Some of us do not but we all had a very, very good time except for possibly Magnolia and August who were both exhausted after a full, full day with no naps whatsoever. 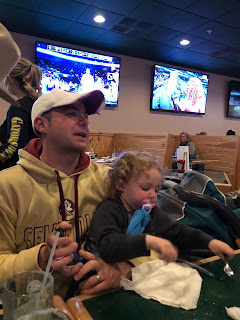 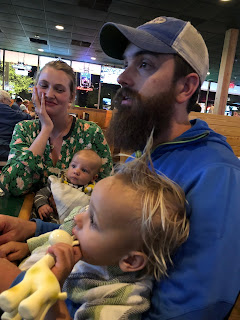 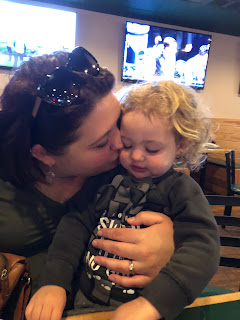 It was fun. It was really, really fun.
And then Owen spent the night in our room and I shared a bed with him which led to a less-than-stellar night of sleep but I woke up in a fairly cheerful mood and then we all went to breakfast at the same place we'd gone the day before which is just incredibly awesome because of the wait-staff. Those women are truly professionals.
When we walked in again today, they immediately remembered what we'd ordered for drinks the day before right down to the orange juice for Magnolia and the milk for August. 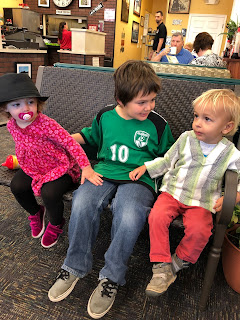 It was all such a good time and it was so sweet, watching the little cousins interacting. Gibson and Owen both are precious with the little ones and Gibson walked August into the restaurant, holding his hand carefully in the parking lot. 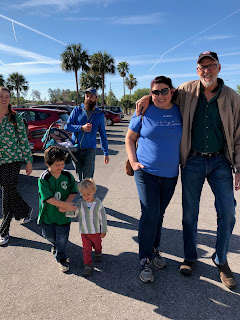 Owen sat next to August when we ate and so generously let August eat half his french fries (Owen isn't that keen on breakfast foods) and softly blew on each one before August ate it to cool it down.
"I feel like a dad," he said. And I could tell he was proud.

The shuffleboard players had to finish up one more game before we left. Jessie and Vergil are staying another night so that they could go kayaking today. I have gotten a report of that trip and Jessie said that they had a truly scary experience where a pod of manatees almost tipped the kayak over and got the babies soaked and covered in eel weed. If you've never seen a manatee up close, you have no idea how large they are. Yes, they are gentle and slow moving but they are also huge and could easily tip over a small boat. Jessie thinks that perhaps they were mating and were frightened and disturbed which caused them to all try to get away very quickly.
But they also saw monkeys and an eagle who swooped down and grabbed a fish from the water right in front of them. So, in some ways, it was magical too.

It was just such a good trip and I'm so glad we took it. Just having all of that time together being silly and happy and keeping up with the kids and watching the crows go to roost at night in their uncountable numbers, and observing the life at the Motel 6 which was, ummmm...interesting to say the least, and going out to eat and watching the children play No More Monkeys on the bed and simply all of it was tremendous.
I have some excellent memories I hope not to forget, including this one:
Last night Gibson was so tired and wanted something, I can't even remember what, and he and his mama and Maggie were standing outside our room discussing this and Gibson finally, wailing, threw himself down on the pavement. August was in our room, watching something on TV (a huge treat for him) and he got off the bed, ran to the door and slammed it shut tight and then calmly got back on the bed and resumed his TV watching.
Lily thought I'd done it which made it even funnier in a way.
She told me she'd thought, "What the hell, Mom?" and I could not stop laughing and eventually, Gibson did stop crying and all was well.

Owen rode with us on the way down and the way back and he was such pleasant company. We played Guess the Animal on both trips and this afternoon we actually found our boy a Chinese restaurant in Chiefland, Florida. It was not a buffet and it was not the kind of Chinese restaurant where you'd be offered chopsticks but the wontons in the soup were homemade and Owen's teriyaki chicken with lo mein noodles made him very, very happy.

Yep. It was a good trip and it is good to be home where all of my chickens are still alive and so are our cats. I have unpacked, mostly, and started laundry and picked salad from the garden and turned on the sprinkler and the azalea blooms are insane and tonight I'll be in my own sweet bed with my own sweet husband. I'm so glad he went with us. I know that my kids and my grandkids love me but their grandfather is special to them all. He is the biggest and tallest and most gentle man they know and he can also be crazy funny and ridiculously silly and his lap is always available for babies, his arms always right there for holding close and hugging.

Leftovers and salad for supper tonight, followed, I am sure by some March Madness something-something and then bed and sweet dreams of mermaids swimming in water as clear as, well, water, and bubbles rising and bursting with almost preternatural light from above. Of a love of a baby, passed from arms to arms giving the toothiest and goofiest of grins. Of little boys thinking they are big boys, of big boys, taking good care of little boys, of a family no different from any other family, and yet unique in the way that each and every one of us is unique, whether happy or not, no matter what Tolstoy said.