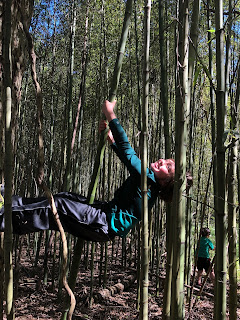 Speaking of bamboo jungles, there's one. That's the part of the yard where we let the bamboo grow where and how it will and it is sort of a magical place. The boys feel like they've entered a magical realm when they step into it.

Lily and Owen and Gibson and Magnolia came out this afternoon and then Jessie and August and Levon arrived in Lloyd too. Lily was taking Owen to a birthday party down the road and so Gibson and Maggie stayed here and Jessie and her boys are moving in for a few days while Vergil's out of town on business.
And it was a busy, busy afternoon.

After Lily and Owen left for the party there were endless snacks and lots and lots of playing in the library. There were dominoes and puzzles and books and horse riding. 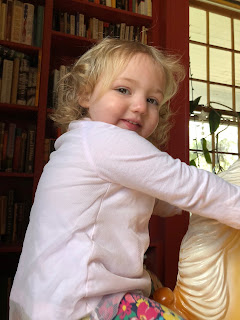 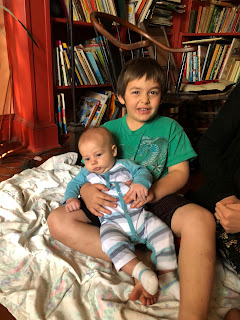 Gibson right after he said (screamed) Levon is so CUTE!!!!! 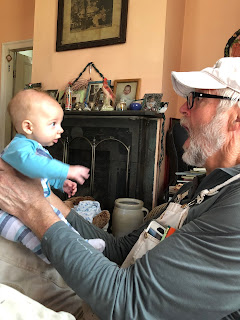 Being entertained by each other. Before I know it, that child will only want his Boppy too, just like all the rest. Ungrateful little wretches, every one.
Sigh.

We went outside and Boppy helped the kids play on the boat and we fed the goats and said hey to Dearie, my former rooster who is just beautiful. 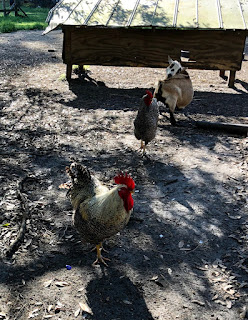 He lives with about three other roosters in the goat pen and they all seem to get along and I'm glad that my neighbor has given him the  opportunity to strut about and crow and perhaps get a little lovin' on the side with one of the many, many hens who live in a separate coop.
I mean- they are birds. They do have wings. They can fly. 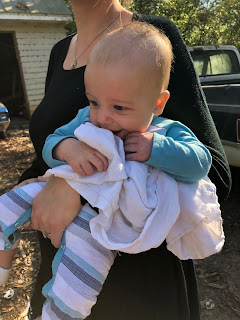 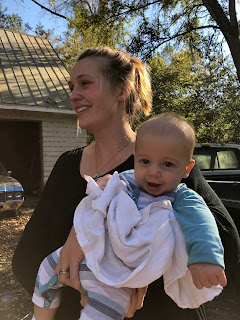 Our happy little monkey. Our babiest baby. I'm so glad he's here visiting for a few days with his mama and his brother. They are all in the bathtub right now and I've got a leftover gourmet buffet warming up and need to make a salad. But here's two more pictures. 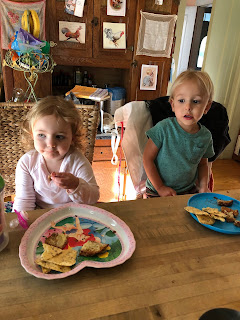 The cousins having a cheese toast and chip snack. 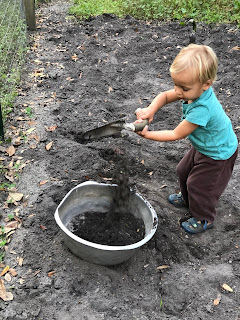 And August, digging in the garden, moving dirt from one place to another.
That boy is a hard worker.

One more excellent day in the land of Lloyd.