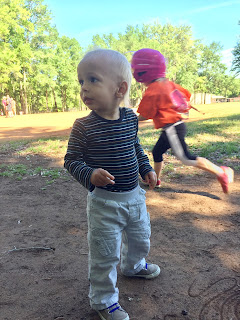 I got a text from Lily this morning saying that Gibson had a T-Ball game at 10:30 in case I was interested.
It was one of those mornings and I knew that if I valued my sanity I needed to get the fuck out of the house and so I went and so did Jessie and August, as you can see. Well. There's August which, 99% of the time, means that Jessie is within arm's length.
When I got to the field, Owen came rushing to meet me and hugged me so hard and even rubbed my back and then hugged me again and I knew I'd made the right choice in coming. Jason is coaching the team again this year and not only is Gibson on it, but so is the darling Lenore. There are lots of girls on the team this year and one of them was even smaller than Lenore and wore a pink helmet and played just fine and I wanted to take her home and wrap her in a blanket and rock her to sleep because she was that cute.
So we had a good time, watching the game and cheering on both teams and there were only a few tears and Gibson mostly paid attention and Maggie fed snacks to August who was a bit wary of even that sort of attention and then he wanted to go play ball too and so did Maggie, to tell you the truth.
Then she found a chair that someone had brought and decided, just like Goldilocks, that it was just right. 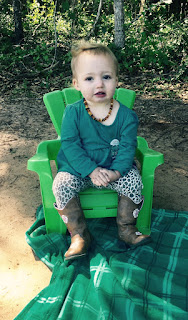 And it was.
Please note the Farrah Fawcett curl she's got going up there on the right side of her head. Her right. Not ours.

Eventually, the game ended, as they always do and everyone lined up to slap hands with the other team and coaches and umpire. 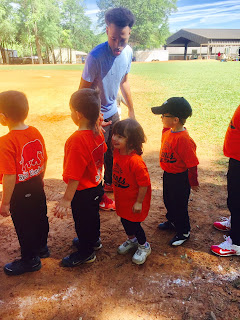 There's Gibson and Lenore.
This is definitely my favorite part of the entire game. 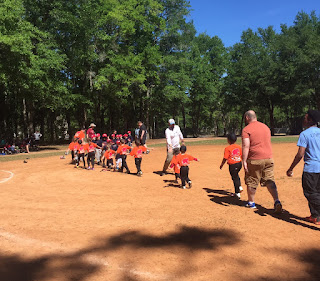 So that was that and then we all went to a little arts and crafts festival where our friend Kelly (who gives me chickens) was selling her jams and jellies and preserves. There was a DJ and lots of people selling their wares and an Easter Egg hunt. We hung out there for awhile and I bought two jars of Kelly's preserves and a loaf of homemade banana bread offered by a family which seemed to have a lot of little girls in it. They were darling. What can I say? And then I gave the loaf to Lily for her eternally hungry children to eat.

All of this was good. I needed to be outside and with people and with people, specifically whom I love, but I was uncomfortable the whole time. The anxious itchiness was making me hyper aware of everything and even though part of me was fine, there was another part that was screaming and I'm sure that some of you know what I'm talking about. But I proceeded on to Publix and then to the library and then came home and I called Lis.

We had such a good talk after which I went out into the garden and did some weeding and for about an hour I felt like myself and cheerful and hopeful and I cut up the chicken's fruit and fed them and turned the sprinkler on the garden and was looking forward so much to my supper tonight and was so glad to get a picture from Mr. Moon holding a nice-sized grouper and then suddenly, the anxiety fell upon me again and I swear to god, I am sick of this shit.
One moment I am just pleased as a woman can be because her oldest hen has laid two eggs in the last week and the next moment I wish with all of my heart that it was time for bed so that I can just dissolve into blessed unconsciousness.

Well, fuck it and tomorrow I am going to plant some cowpeas and I got Zadie Smith's new book from the library and it's going to be cool temperature sleeping again tonight and perhaps Maurice will sleep with me once again, her weight against my hip a most real comfort in the dead hours of dreams, and all of my chickens are still alive and there will be grouper in the freezer soon and I got kisses from all of my grandchildren today and Keith Richards is still alive and I have appliances and I have extra rolls of not only toilet paper but also paper towels and I have friends and I live in a most beautiful place and the wild birds are singing their going-to-bed songs as are the hens, and the sugar snaps are blooming and soon we'll be eating their tender pods and peas, and suddenly the tears are stinging my eyes and I know that no matter what, I could not and would not trade this particular life for any other.

But I sure wouldn't have minded getting some better chemicals. I ain't gonna lie.