And Yeah, I Got The Cowpeas Planted Too 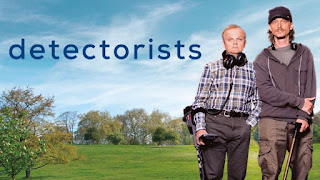 I got a knock on my front door this morning and I have to admit my blood rose a bit, thinking it might be some sort of religious door-to-doors and I could get a good argument going but no, it wasn't any Seventh Day Adventists or Jehovah's Witnesses or even a politician. These are usually the only people who knock on my front door. Everyone else comes to the kitchen door.
Of course.
Anyway, there were two fellas on the porch, both dressed in decidedly secular shorts and t-shirts and the older one introduced himself and the younger guy who was his son. They were, well, detectorists. Have you seen that series? It's lovely and Mr. Moon and I watched it a few months ago. It's about people who hunt for interesting things with metal detectors and it turns out that there is like an entire culture of these people. They even have a CODE!
So this man and his son had just taken the risk of knocking on my door to ask permission to search my yard for aforesaid interesting things because my house is so old and old yards sometimes hold old things. Which are interesting.
I checked out the vibe and they seemed like fine people and so I said, "Why not?"
They were so thrilled that the dad hugged me spontaneously. I was the first person he'd ever asked for permission to hunt on their property! And I'd said yes!
They got their equipment together and assured me that they would show me what they found and of course I could keep whatever I wanted and that they always took whatever trash they found with them and so on and so forth and I said, "Fine," and left them to their own devices.
Haha!
I spent the morning and early afternoon in the yard, kicking bamboo, cleaning out the hen house, working in the garden, etc. They went about their business and occasionally I'd check in with them to see if they'd found anything.
And they never really did. They were sorely disappointed, I could tell. They found a few pennies and not even wheat pennies and two little rusted padlocks and that was about it. A piece of what looked to be old gas line, perhaps.
I felt bad for them but was glad I could give them a few hours of enjoying their hobby. They both kept thanking me for letting them look and were as polite as could be, even using headphones so that the beeps of their detectors would not bother me.

Soon after they left with their sad little haul (I let them keep everything) Lily and the kids came over. We had so much fun! And let me just say that if you are ever lucky enough to get a visit from Owen, make sure to stock up on Coastal cheddar cheese to make him toasted cheese sandwiches with and you will have a friend forever.
I swear- I think he ate six of them. And asked if he could take some cheese home.
To-go cheese.
Which of course I gave him.

We checked out the new baby chicks and also the teenager chickens. We fed them fruit and Owen held Nicey. 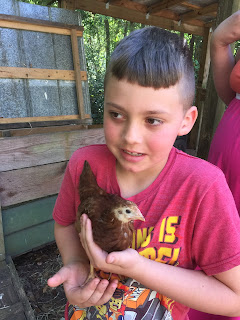 Maggie got down on the ground to try and catch chickens from under the little roost box. 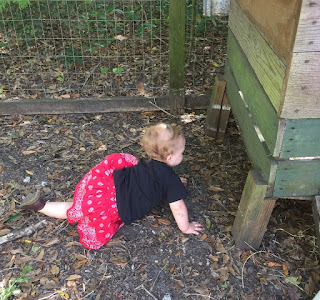 That child! She was determined to catch a chicken and of course, she couldn't but she made me laugh so much. She also took a drink of water DIRECTLY FROM THE CHICKEN WATERER but it wasn't as bad as it sounds because I'd just put a very clean waterer out, filled with fresh water, poultry vitamins, electrolytes and probiotics.
Practically a health drink! Right? Right!

We picked carrots and kale and the kids played on the play set. And Owen ate oxalis (aka sour flower) which he says makes his eyes squinch up as soon as he puts it in his mouth. 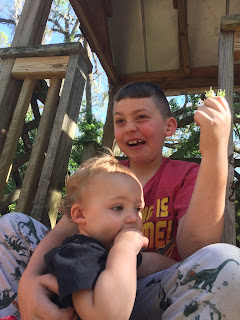 He shared with his sister, too.
I feel terrible that I didn't get any pictures of Gibson but he had a good time. When I was pushing him in the swing he yelled, "I love this so much!" and another great quote from today was Owen saying, "We have the best family ever."
I can't even remember what prompted this remark but it sure was nice to hear.

And that's been Lloyd today. A very, very pleasant day and even the chickens amused us. Mick, after I put fresh hay in the nesting boxes, made some beautiful nests and called in the hens to show them. I swear- this is the funniest thing and I remember Elvis doing it too, once in my big potted porch fern which he flattened down nicely. And for awhile, the hens laid there dutifully.
Violet came in and laid one of her tiny eggs where Mick had wallowed out the hay and that damn rooster stood over her and bawked the entire time which would have made me too nervous to lay but perhaps she appreciated the protection and interest.

I wonder how many roosters I have with these new chicks. Hell, they could all be roosters for all I know, but probably not. And it's good to have a back-up or two which reminds me to tell you that Owen and Gibson want me to name two of the baby chicks Dearie and Nicey so that we'll have back-ups of those, too, in case the current Dearie and Nicey die.
They are already sanguine about that possibility, obviously, and perhaps that's part of my role in their lives- teaching them about life AND death.

All right. One more picture. Lily sent it to me. She couldn't wait for Maggie to really get enough hair to make a hairdo with but she did give her a little ponytail on the top of her head. 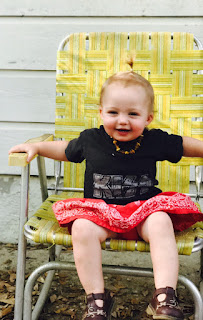 Show me something cuter.
You can't, can you?

I think we'll keep that kid.
And yes, that's a Kiss t-shirt.

And now, since it's Sunday and we need a hymn, I offer this.

She's my little rock and roll.