In Which Hairs Are Cut 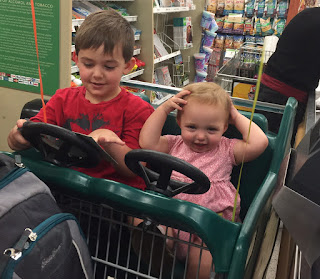 There's the two babies I got to spend some time with today. Gibson got his hair cut and Maggie did not and you can see that she is still upset about it.
Bless her little curls.

Gibson retained his rat tail. He and Owen are determined not to give those things up. I believe they are letting their freak flags fly. 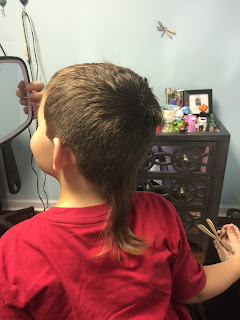 I long ago realized that hair is not a battle I ever would choose to pick with my own kids. I mean- who am I to say? I got perms in the eighties. And Lily and Jason are fine with letting the boys decide what their hair should look like. Kids deserve some autonomy in their lives seeing as how they don't get a whole lot of it.

Lily got her hair cut short. It's cute as it can be. 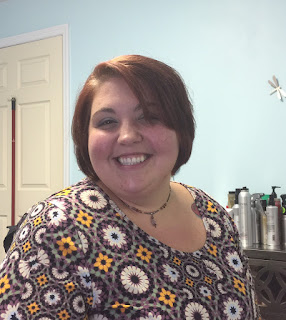 Of course we went to Melissa because we love her and she's wonderful and she lets the children play with toys and break them and says, "That's fine. I got them at the Dollar Store," and then she lets Gibson open the candy drawer and pick out a sucker for himself and his brother and then we all kiss and hug and I tell Melissa to come and see my chickens and to give our love to her sweetheart.
Golly. There are just some people that I truly wish I could claim as blood kin and Melissa and her husband John (known here in the blog world as Juancho) are two of them.
As I have said before, no doubt.

Anyway, after the hair cuts we went to Publix and I got bachelorette groceries including salmon and fancy mushrooms and, uh, chicken thighs.
Oh yeah. We're going to have a good time now.

So I guess I'm going to cook a little salmon and some pasta that I'll eat with the arugula pesto I made a while back and I've planted some more cucumber seeds in the garden which involved a tiny bit of weeding and now I have fucking ant bites all over my legs and arms. All of the chickens are fine and dandy and I bought more grapes and BOGO cut-up melon to make them delicious delicately chopped fruit salad with and the big girls laid me four eggs today which hasn't happened in about a year.
We're supposed to get more rain tonight and I hope we do.
Last night Maurice slept with me for the first time in forever but I semi-forced her by carrying her into the bedroom and putting her on the bed and the whole time she was protesting like a governess in a Georgette Heyer novel being carried upstairs by the Nobleman of the Estate, her bosom heaving, beating her little hands on his massive chest and protesting, "No, no! Please my Lord, do not despoil me!" although Maurice only meowed and spat a little and retreated to Mr. Moon's bedside table where she groomed herself thoroughly and then eventually laid down on his side of the bed, as far from me as she could get, but when I woke up in the middle of the night, she was cuddled up next to me and I appreciated her so much.

Oh. I planted those succulents in the hen planter. 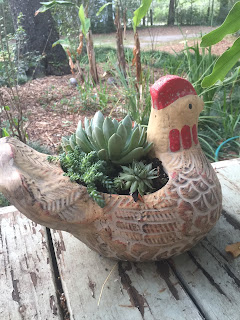 Time to go heat up the skillet and put the water on to boil.