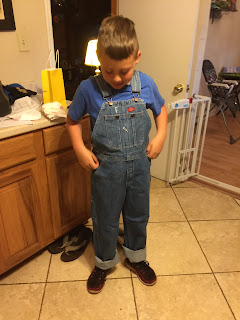 I had ordered some overalls for Owen and Gibson, per Owen's request, and they arrived in the mail yesterday so this morning I took them over to Lily's when I went to babysit. Owen was thrilled and immediately changed into his after asking his mom if he could indeed wear overalls to school.
"I don't care what you wear but we're leaving in two minutes!" she said, frantically trying to get everything ready to go take the boys to school and then to get to her dental appointment. So I helped Owen get into his new britches and buttoned up all of the buttons and took off all of the tags. He was immediately aware that all of those pockets would come in mighty handy when it came to smuggling Pokemon into school. He loved them. We also discussed how one pees while wearing overalls and his mama gave him some excellent advice which was, "Don't let your straps drag in the toilet."
He looked horrified but I assured him that this could indeed happen if he were not careful.

Gibson couldn't have cared less. He was too excited about being picked up at school by his Aunt Loren and then taken with his beloved Darling Lenore to go see "Baby Boss" to give one thought to his wardrobe.
My Lord, but small boys have a lot of energy at eight a.m.
Maggie was pretty wild too but sweet and happy and she wanted to drink the smoothie I'd brought and so I let her and I swear- she must have drunk eight ounces of fruit and yogurt. We sat on the couch and played baby games and I followed her around inside and out. She's a pretty self-directed little woman when she doesn't want to be held and cuddled which she enjoys immensely. She is firmly into the "dat" phase of language learning, pointing to everything she sees with her fat little finger and asking, "Dat?" which is just what her Uncle Hank did and which, in my learned opinion, indicates huge intelligence.
I took her outside for a little while and it was the most beautiful morning, cool, with the sun coming up and making all of the new green shine with near iridescence. 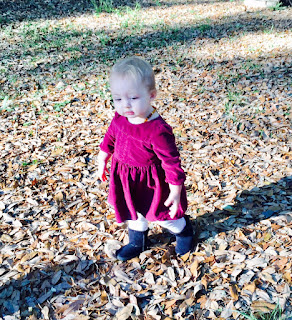 She was wearing one of my favorite dresses, made of a very narrow wale corduroy along with leggings and her faux Ugg boots and this is a very cute picture but I love this one the best. 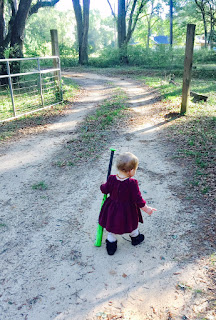 She had grabbed her brothers' baseball bat and was headed right down the driveway as if she was already running away from home, taking big strides in her black fuzzy boots. I followed her for a ways but before she got to the dirt road, I took her hand and said, "Come on, little woman, let's go back home," and we did.

When it was time for a nap I held her on my lap and read her a book three times and she fell fast asleep. There is something so infinitely precious about having a child trust you enough to fall asleep in your arms. I carefully transferred her to the bed and waited for Lily to get home. It turned out that instead of a root canal, the dentist decided she could make do with a crown and so that's what she got but it still took awhile. And I wouldn't have traded those hours with my granddaughter for anything. We joked and laughed and cuddled and read and traded an apple back and forth for bites and talked about the names of things.
We simply love each other.
This grandchild love, even after seven years, is still amazing and miraculous to me. I still find each one of them to be quintessential human beings and of course I would- all of my foremothers and forefathers have helped contribute to these small people and although I don't see myself in any of them, not really, I am sure there is a subconscious recognition of DNA and RNA and this is good. It ensures that grandparents help to love and care for their grandchildren, thus helping to ensure that the genes keep on going.

Lily and I were talking about Owen wearing those overalls to school today.
"I hope no one teases him," Lily said. "Then again, he has that rat tail and doesn't care what anyone says about that."
"True," I mused.
"He said he was going to grow it forever," she said. "So I asked him what would happen if one day he got a girlfriend who didn't like it. He said, 'My girlfriend already doesn't like it.'"
I laughed and laughed.
There's a boy who just doesn't care what others think. He is who he is and he likes what he likes and to hell with the rest of the world.
I admire that. I think he's going to be okay, that one, and so will August and Gibson and Maggie.

And that's what I'm thinking about tonight as the sun sets and the chickens go to roost.
Little Bear is still with us. I'm not sure at all that she's out of the woods yet but when I gave the bathtub babies some cut-up fruit, she ran and pecked up a tiny piece and went and hid to eat it. I can tell that she's lost ground, growth-wise, in the past few days but if all goes well, she'll catch up.

It will all be what it will be and I refuse to fucking discuss the potential disasters being foisted upon us and the world by Mr. Shits On A Golden Toilet.
How DARE he use the phrase "beautiful babies"? How dare he? Who wrote those words for him to say and I ask you this- does anyone on this planet believe that he's ever looked at a baby and thought, "Beautiful," much less felt a need to protect it?

I will stop now because that's enough and there is more than enough scary and weird and terrifying energy flooding us all right now. I will simply say yes, let us love our beautiful babies and do everything we personally can to protect them, to nurture them, to tend them, to love them, to encourage them, to make them feel safe enough to be who they are, to sleep in our arms when they are tired.