In Which I Miss Kathleen 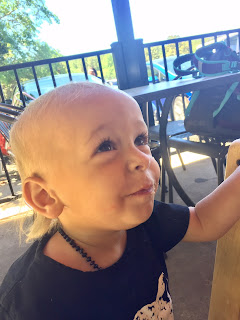 Oh, Lord, the crazies overcame me this morning. I woke up with a very sore spot on my gum near that molar which I was told is going to eventually have to come out and so I freaked out but mostly because my dentist isn't open on Fridays and I may be leaving town on Monday. More about that later. So anyway I called the dentist and quick, quick took a shower and got to town and my sweet hygienist looked at it and then my sweet dentist looked at it and both said nothing looked bad at all- a little redness- and perhaps I could have injured the gum slightly with a chip or a toothbrush and well, yes, I did eat a whole bunch of millet and flax chips yesterday.

God. Either I'm refusing to go to a doctor for any reason whatsoever or else I'm hauling my haunches into the dentist chair to see what horrible thing has befallen me next which usually turns out to be nothing.
It's still sore though and that's the truth.

BUT, after that I felt much better and relieved and all kinds of groovy feelings and stopped by a Goodwill for awhile because I had plans to meet up a little later with Jessie and August and Hank and Rachel at the buffet where they have the entire cooler full of delicious desserts AND a freezer chest full of ice cream treats. I don't know why I always talk about those desserts because I have yet to get one but it's just so mind-blowing to me that you can get anything from fresh fruit to Jello Pudding to cheesecake to Igloo Bars to...well, whatever.
And as much as you want!
But aside from all of that, it's a good buffet and I had a bit of everything including coconut curry tofu with vegetables and green curry tofu with vegetables and Mongolian tofu and Mongolian beef and an absolutely delicious sour pork with vegetables which was filled with greens and goodness.
We ate outside and it was windy and cool. Although we never got the promised rain, we got the temperature drop and after yesterday's humidity and heat fest, it feels like heaven. We had to constantly chase napkins and straws and even chopsticks which blew off the table but it was worth it, having that clean fresh air washing over us. August liked it. As you can tell.
He ate everything too, that boy.
When Jessie pulled him out of his car seat I reached out to him and he came to me and immediately kissed me, no prompting required.
Oh my heart!
He was due for a nap and was in that crazy-wired-silly mood that babies get into sometimes when they need sleep and he laughed and laughed as he ate and the wind blew his hair and I blew the straw paper at him and taught him to do it too. 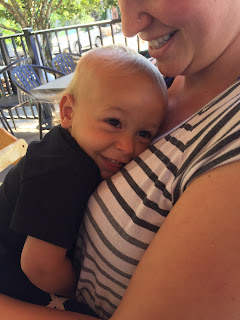 The best, warmest, most comfy place on earth.

We all sat around and chatted for forever minus not quite and then went our separate ways. Hank, to write trivia, Rachel to an appointment, Jessie for a nap with that baby, and me to the nursery next door where I bought a few red impatiens and a red begonia that I had to have.
The woman who helped me at the nursery practically went into paroxysms of ecstasy over this plant.
"It's so beautiful!" she kept saying. "Isn't she beautiful?" and so on and so forth until I almost wanted her to just hush her mouth. "It's such a good deal!" she said. "I thought it would cost so much more than that!"
Well. Whatever. I do love the begonia and it is now in a new pot on my kitchen porch and I keep thinking of how Kathleen and I would buy begonias and repot them and share with each other.
Oh, how I wish I could show this one to Kathleen. She would love it. 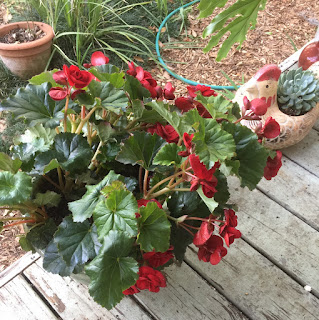 While I was in line waiting to check out, a young man struck up a conversation with me and we got on to gardens and chickens and he was adorable and when I left he said, "It has been so lovely, chatting with you!" and I'm not even kidding.

After the nursery, I drove across town to get my oil changed at the place where Mr. Moon takes all of his cars. It appeared that I got there just as a political argument was about to reach the boiling point.
"What has Trump done for YOU?" asked the employee in charge, of the customer he was talking to. It appeared to me that the customer was also a friend and I would have loved to stick around to hear the rest of the discussion but I was ushered into the lounge where this guy came and sat on my lap. 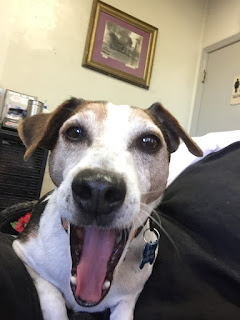 His name is Jackson. I love him.

And then home again and I've done some plant wrangling and repotting and porch-plant rearranging and fruit-salad-serving to the teen chicks and I am so sorry to report that I do not think that Little Bear is going to make it.
She is gasping more obviously and her eyes are closed and she is not standing up very much. I did even more internet research and she may have some bacterial illness which means the other three will probably get it or else she has a heart problem or maybe even worms but I do not think that's it. Some chicken-sites advise giving water with sugar and supplements with an eye dropper and some say that this only leads to aspiration but remembering how Mr. Moon saved Elvis when he was a chick with a smashed up Centrum Silver and sugar water, I have given her some water with sugar, and chick vitamins and the electrolytes and the probiotics with a syringe but I have just checked on her and I think she is dying.

Poor tiny thing. I almost wish I had the strength to help her on her way but I just cannot. She may well be suffering. She looks as if she is.

Again- I wish Kathleen was alive so that I could call her and discuss this matter with her. She was my chicken guru as well as my begonia partner.
But. This is not to be and I have been doing this long enough to know that not all chickens make it to adulthood and even after that, it's a crapshoot.

All I can do is all I can do and I am at peace knowing that I have at least done that.

If she does die, I think I will bury her beside Elvis who was laid to rest in the front yard beside the wild azalea which is now beginning to bloom. I like to think that I am at least somewhat sensible about my chickens, accepting that they come and they do go, but I will tell you that when Miss Trixie laid an egg yesterday, I wanted to give her a tiny crown with rubies and diamonds in it to celebrate her return, however brief, to full fertility.

Love to all, both great and small...Ms. Moon