Well, collard greens are cooked and in their pot in the garage refrigerator, the umpteen bean salad is mixed up and in the refrigerator in the kitchen, the kid swimming pool is inflated and filled, boys have played in it and taken a shower, Owen and his Boppy are sharing an apple with peanut butter in the Glen Den, Gibson is sitting on my bed playing with my iPad, and the sheets from that bed are in the washing machine because of a small Icee accident, and, well, a few other things have happened.
But the Rolling Stones are on the record player (Sticky Fingers) and the teen chickens got let out of the big coop this afternoon. Here's Maggie, checking the situation out and smiling her beauty pageant smile. 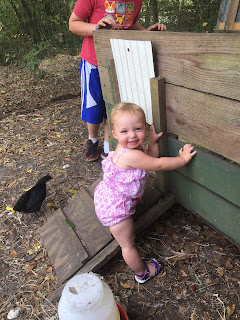 I mean, please. Get out a camera and she is in Beauty Queen Mode. Like Lady Gaga, she was born that way. You should see her when her Boppy walks in the room.
"Boppy!" she says, and holds her arms out to him.
That child has it going on.

So not only did I let the teenagers out of the coop, I've got the bathtub babies in the little tractor coop in the big coop. I could be wrong but it seems to me that it's time to let those children breathe some fresh air and get ahold of some dirt. The teens love being outside. They're scratching all about and eating the big chicken's food and drinking from the big chicken's waterer and having the time of their life while the baby chicks are nibbling on fresh lettuce and exploring their new apartment.

And so it goes and it's all sweet and now Owen is washing windows for me and cleaning other things. He WANTED to. What a boy! What a sweet, fine boy. 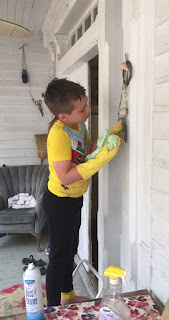 Tonight we'll all get good sleep, I hope, and tomorrow we'll wake up and get started on preparations for our Feasty Day. Bread will be made, ham will be baked, avocados will be smushed into guacamole, eggs will be hidden and hunted, people will arrive and kisses and hugs will be given and received and hilarity may ensue if things go as they generally do.

Once again I ask- how did I get so lucky?
No idea but I certainly did.