It's All Alright And Shall Be Even More So

I was running around this morning, trying to get things done before I left for my eye appointment. Feeding chickens, cleaning up the bathtub chick's bedding, mixing fresh water with their vitamins and electrolytes and probiotics, hanging a few clothes on the line, making the bed...general stuff.
Suddenly I remembered how damn blind I get when I have my eyes dilated and I panicked. The last few times I've gotten my eyes dilated I've known for sure and certain that I shouldn't drive. It's like one of those nightmares where you are driving along and can't see out the windshield or can't open your eyes or something horrible like that. Shit. I knew Mr. Moon had an appointment with his acupuncturist and Lily was at work and Hank was actually working and of course, May was working and so I got in touch with Jessie although I hated to, knowing how long she'd have to wait for me with August but she said she'd gladly do it and so I drove to her house and she drove me across town and while I had my exam, she took August to a little park.
It went fine, of course. No brain tumors detected and my macula looks fine and that's a fear of mine because my mother had macular degeneration. I'm going to have to have cataract surgery by the time I'm seventy but that was pretty much a foregone conclusion.
I told this doctor who saw me that I'd returned to him because I really did like him and because he'd figured out a correction that no one else had been able to figure out and he thanked me more than once for telling him that. He said that he really does like having a connection with his patients. It means a lot to him and I believe him.
Also? He has no problems laughing at jokes.
So I got my new prescription and Jessie and August came back and the sweetest, prettiest lady helped us with frame choosing. I had determined to get something with a little bit more panache this time. Why not? I'm an old lady and who cares?
I got blue frames. Light blue. Jessie and the lady both gave their approval.
And it'll take some time for them to come in. I am mostly looking forward to better vision but it will be nice to have blue frames.

So that was that and I should feel all relieved and happy but basically I came home so wiped out that I had to take a nap and woke up feeling nothing but old and weary and boring and useless.


The sugar snap peas are starting to make. 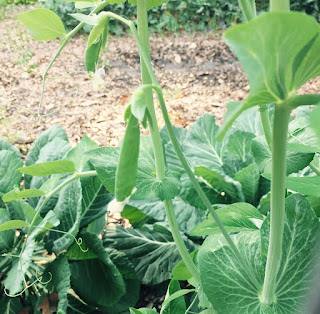 Oh, how the children will love them when they swell and they can pop the entire things into their mouths, crunching the sweet green crispness which is only available if you can pick them off the vine yourself, making them all the sweeter.

I'll feel better tomorrow. I know I will.