Let's See. I Talk About Babies And Food. Yep. And It Won't Be The Last Time, Either

I'm being sort of bad Mer right now by not being at Owen's baseball game but sort of good Mer by getting ready for he and Gibson to come spend the night. Don't tell the boys but there is a plan afoot to possibly add a dog to the Hartmann household and after the game Lily and Jason are going to speak with a friend of Jason's who trains service dogs to see if he could train this little mostly-Lab pup which has been offered to Lily to be a service dog for Owen. I think getting the dog is already a done deal in that Lily has fallen in love with her and she's sweet and wiggly and curious and all of the wonderful, charming, delightful things that a puppy is.
And Owen wants a dog with a passion akin to the burning surface of the sun.
So anyway, all this means that my big boys are coming to spend the night and we shall be dining on pizza and sugar snap peas with Purple Cows for dessert.

I had a fairly good day today and got a few things accomplished that have been worrying me at night, the main one being getting Miss Jessie Moon Weatherford a birthday present because on Monday she is turning 28. TWENTY-EIGHT! This is vastly and completely impossible in that I am only forty-two but we'll just leave that there. I also got shopping done at both Costco and Publix AND I went and bought the purse.
Of course. Y'all told me to and I did. You are the boss of me.

But best of all, I had lunch with some of my babies. Hank and Rachel met up with Jessie and August and Magnolia June and me at that crazy place called the Wilderness Cabin Buffet where they have many, many taxidermed examples of formerly living wildlife which can be found in and around the native woodlands of North Florida and South Georgia. This delighted August who pointed at each one he spied and said, "Deah!" which is how he says "deer." I suppose that to him, all dead animals are deers due to the fact that his Boppy's den is rife with them.
Maggie did not seem to care and was, in fact, a little bit less happy than she usually is although she was cuter than a bug and wanted me to hold her a lot. August wanted me to hold him too. Here's how we worked that out while we were waiting on Hank and Rachel. 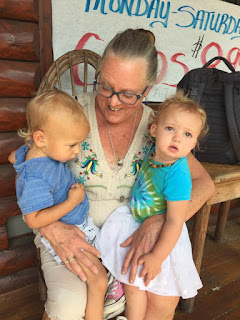 August is looking a bit wary of his cousin, as he sometimes and sensibly is although I don't think she's slapped him in months. She seems to be over that stage and thank goodness.
What you can't see in that picture is her shoes. 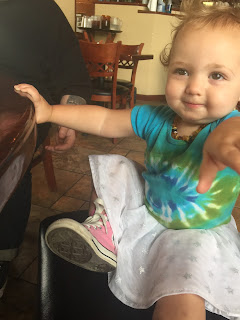 My Lord but Lily sure does dress that baby girl with style and panache!

And August ate a fried chicken leg all the way to the marrow. 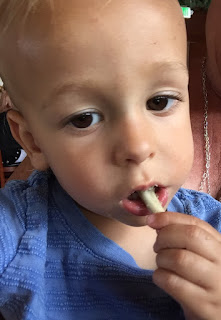 He was serious about it, too. It may have been his first. I am not sure.

So we all dined on southern gourmet cuisine which is just so good for us. Even the vegetables have meat in them. Well, of COURSE the vegetables have meat in them. That's what makes them Southern and Gourmet. And by the way, the pregnant lady chose the venue.
There were pole beans and lima beans and collard and turnip greens and black-eyed peas and macaroni and cheese, sweating under its blanket of cheddar. There was potato salad and cole slaw and banana pudding and what looked to possibly be jello cake and pineapple upside down cake and cornbread and yeast rolls and cinnamon rolls so deadly, wicked good I won't get near one. There was fried chicken and baked chicken and fried fish and fried shrimp and barbecued pulled pork.
Basically, it is the buffet I imagine will greet me when I enter the Pearly Gates.
The best I can say is that I did not hurt myself.

And then we paid up and all went outside and hung out and kissed each other goodbye about fifty times and there were some old ladies on the porch who looked like they might be visiting from a nursing home and one of them observed everything we were doing and cackled every time August or Maggie reached over and kissed one of us and there was another old lady who was holding her own baby- a doll- and I said, "Well, that'll be me. Both of those old ladies. I'll just laugh at all the babies I see and I'll be holding a doll," and my kids agreed that this is probably true.

Jessie texted that as they were leaving, August was yelling, "Yuv oo" to all of us and thus, he can now say "I love you," and that makes my life pretty complete. In some ways I feel as if my work here is done but probably not until I get this pizza cooked for Owen and Gibson and tell them the Mr. Peep story tonight which Owen still insists that I do although he always falls asleep before Mr. Peep does. Plus, oh yeah, I really sort of want to meet this newest little bean that Jessie and Vergil have co-created and August might need some special Mer and Bop love when that happens and, okay, well, yeah.

I guess I'll stick around.

You do too, okay?