Real, Actual News Which Is Joyful 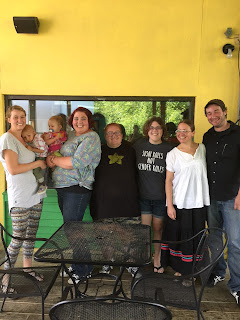 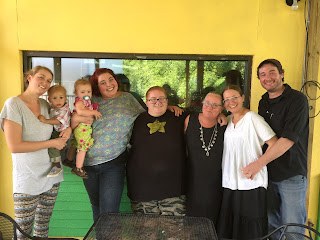 This morning I watched a video online about Cozumel and in it a meal was eaten at Casa Denis which is one of Mr. Moon's and my favorite restaurants on the island and it is probably the oldest one still operating, housed right downtown in a wooden building which is over a hundred years old. As the folks in the video ate their guacamole and chicken tacos and plantains a great craving came over me and I texted all of the children to see if they wanted to go to El Patron for lunch today and miraculously and amazingly, everyone could make it and so we went. It wasn't Casa Denis, but it was good enough and we sat out on the deck and we ate and we talked loud and we laughed and we laughed and we were probably inappropriate because we have a strange and awesome shared sense of black humor and we realized that it was Sibling's Day and it was wonderful.
Gibson would not get in the picture and Hank told him that once, when he was little, he hid under a car in order not to be included in a group photo but that Gibson boy was there and he had a good time and he ate all of his fried cheese and his french fries except for one that he gave to his sister which was so kind of him. He spilled salsa on his arm at one point, just a little bit, and he held it out to me and said, "Lick it off!" and I did and his eyes were merry and he hugged me.
Oh, grandmothers. We will do anything those bossy little grandbugs tell us to do.

I love being a grandmother. I think we all know that. I remember before I had grandchildren and it seemed like such an alien concept to me. Even as my children were certainly old enough to become parents, I felt as if I had barely stopped being a full-time mother and indeed, the years between Jessie leaving the nest for good and Owen's birth were not very many.

But. When Owen was born and I watched my daughter and her husband work together so beautifully and so splendidly and so well and so strongly to deliver their son and I finally got to hold him, it all became clear and I held that boy to me and I whispered, "I am going to be your best friend," and so it has been.
He may think that a little guy named Chase is his best friend, but really, it's his MerMer whom he himself named when he was just a wee thing.

And now I have four grandchildren, all of whom call me MerMer, even the youngest, and they kiss me and hug me and love me and ride on my hip and my love for them is too strong to even talk about without crying. 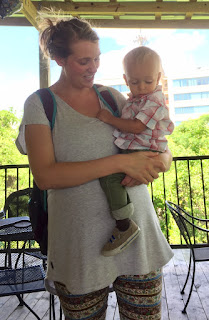 Well.
Can you guess what I am about to tell you?

Jessie and Vergil are going to give August a sibling in early November, speaking of Sibling Day, and so will be giving me a new grandchild and by now I know that my heart is indeed big enough to hold another child, in fact, it is just waiting with that baby's room prepared as if it has always been there (it has!) and so, there will be more love.
More love given, more love received.
More love within us, more love around us, more love, and it seems to me as if love just drips off our fingertips into the universe or perhaps shoots and sparks like light off our fingertips into the sky and beyond and forever.

Right there, in Jessie's belly she is holding more love and new life.

And there you go, the Very Big News which I have finally been given permission to write about and I am so glad to be able to share it.

In seven months I will have five grandchildren and a little over seven years ago, I had none.

Mr. Moon is getting home from his grand fishing adventure in just a few hours and I will be so glad to see him. I think about the night that he actually saw me in that bar and I was wearing my friend Sue's angora sweater and it kept falling off my shoulder and he asked me to dance and how now, almost thirty-four years later, here we are.
More love and more love and more love.

All right. That's enough. I am weeping at this point and I have things to do.
But. 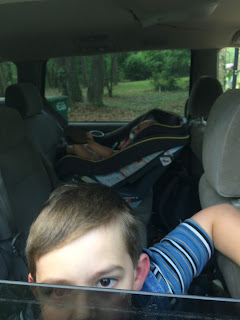 Here. I paparazzied Gibson who, even as I raised my phone to take his picture, ducked so that I couldn't get a good shot.
I apologize to him.
But hey- I licked salsa off his arm today with my very own tongue.
I deserve a little leeway.

I am a grandmother.
I am ruthless and I am crazy and I am fierce.

Ruthlessly, crazy, fiercely in love and ready for more and I can't wait to see who this next member of our family is.