It's Sunday. What The Hell Do You Expect? 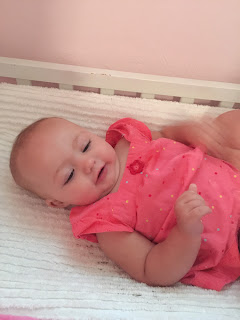 I had to stop by Lily's on my way to Jessie's because I missed those other three grandchildren too. Maggie was asleep when I got there so I got to talk to the boys about school. Gibson crawled up and snuggled me as he does and I asked him how school was going.
"Bad," he said, his voice somber.
Lily says that the teacher reports that he is doing very well and seems to enjoy learning and is well-behaved and gets along with everyone.
"If you can believe it," she added.
I'm not sure why Gibson is refusing to admit any affection for school but he is.
He seems to be handling it well though. This badness.

Owen seems to like first grade. He does arts and crafts, he said. Also? He thinks his teacher must believe that they are in kindergarten because they are doing letters and numbers again and he already knows them. Plus? There's a kid in his class who is EIGHT YEARS OLD!
"Does he shave and drive a motorcycle?" I asked. I was remembering a guy from my 9th grade class who did that. Shaved and drove a motorcycle.
"No," Owen said. I told him about the guy in Jr. High I was remembering.
"I had a crush on that guy," I told Lily.
"I bet," she said.
Owen reported that he likes a girl in his class. Her name is Kimberly and she has long hair and freckles and she rides the bus with him! He is riding the bus this year to the end of the road they live on and his mama picks him up there. It's about a two minute bus ride but I think he likes it. Especially since this little minx Kimberly rides the bus too.
I asked Gibson if there were any cute girls in his class.
"No," he said.
"Any cute boys?" We are a completely equal-opportunity family around here.
"No," he said.
I should have told him that there was at least one cute boy in his class and that his name was Gibson but I did not.

Just as I was about to leave, Ms. Magnolia June woke up and so I delayed my departure in order to visit with her for a few moments. She woke up from her nap in the best mood, all smiles and happiness and waves of joy coming off of her like rays of sunshine and rose perfume and amber waves of grain and the waves of country-girl beauty queens riding on the back of vintage red convertibles in the 4th of July parade down Main Street.
She is so happy, that one.
I held her kissed her and snuggled her and squished her with my love and the boys loved on her and her mama loved on her and she smiles so big and so freely and so completely that I think that her smile is going to overtake her entire being one of these days and she'll disappear into it completely and we'll have to make her mad to get her back.

After I finally peeled myself away from those three, I went to Jessie and Vergil's house where August was seemingly fine with seeing me but he didn't lose his mind about it or anything. He is starting to do that thing that Hank did when he was but a baby where he points to things and asks what they are. Hank always pointed and said, "Dat?" and I would tell him the name and this would go on all day and all night until he finally fell asleep, his little finger still pointing at something he wanted to know the word for. August says it more like, "Dis?" but it's the same-same.
He gave me his goofy grin and let me hold him and we played on the couch for awhile and then Jessie went outside to help her husband with the garden project and I took him into his room to read him books. He loves his books, especially the ones with the pages he can turn himself to reveal new pictures. I knew he was sleepy because Jessie had told me that he'd missed his naps entirely and so we rocked and we read and we talked and I sang to him and then we read some more. When we got to the First Book Of Animals, I could feel him getting heavy on my bosom and before we'd gotten through the jungle animals, he was asleep.
I felt as if I'd won a Nobel Peace Prize. 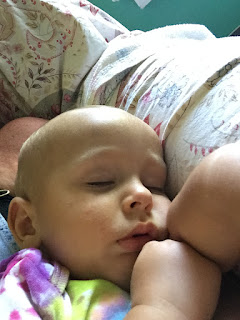 It is astoundingly precious to me that this little guy lets me hold him and play with him and read to him. He doesn't know me the way Owen and Gibson did. He's been such a mama's boy and there's nothing in this world I love more than seeing their love for each other, the way they both beam with such pure joy-light when they smile at each other. And he adores his daddy, of course, but he doesn't really know me that well and so today felt very, very special.
Jessie came in and she put him into his crib and covered him up and turned on the baby-monitor system she uses which involves an old iPhone and her phone and we tiptoed out of the room and went outside.
I pretended to help with some yard digging for about five minutes and that was enough for me. I came on home and finished up the laundry and unloaded the dishwasher and thought about things.
Things.
I'm struggling.
I don't know why. I just feel so worthless, so useless.
Even though, of course, all of the above.

I suppose it's mostly a problem of chronic low-key depression. I never, ever wake up in the morning excited about the coming day. No matter what's going on in my life I always feel a sense of dread in the mornings. Always. And you'd think I'd be used to it by now but I'm not and sure does take up a lot of damn energy to fight my way through it to the other side.

This is not to say that I don't love my life. I do. And there is so much in it to love. 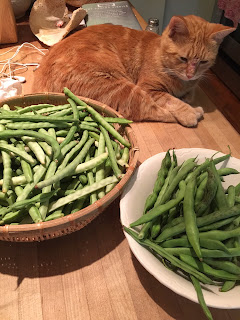 There's old Scar Face Maurice whom I do adore, and the zipper cream peas and rattlesnake beans I picked this afternoon. This damn garden is determined to keep giving, even when I have so very little to offer it.

Which is probably a metaphor or something fucking spiritual.

Well, as we all know, I will struggle on and there are always books to read and babies to love and a husband to continue to love and learn about, even after all of these years, and thoughts to have and loaves of bread to make and changes to make as well, should I have the fortitude and discipline to try and make them.

We shall see. I know without doubt that it's all up to me and no one else in this entire world.
Gosh. That's scary.