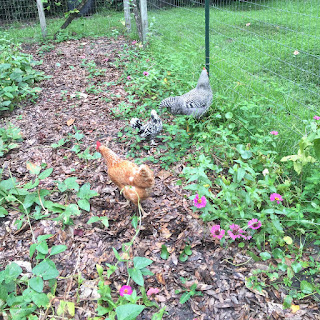 Why, oh why, is it so hard to get a good picture of my beloved chickens?
There are Miss Butterscotch and tiny Dearie and the rooster whom I have not named, helping me in the garden today as I weeded. Butterscotch was especially interested in what I was doing and when I found a nice little green grub, I gave it to her and she gobbled it with speedy greed. At one point, I looked up to see one of the Chi-Cha's let loose a little stream of poop and my first thought was, Oh good! Fertilizer!

Jack is home and hiding somewhere, I suppose. He staggered around a bit as if he had no idea where he was or what he was doing and then I lost track of him. He's a tough old thing and should be fine and I'm certain he'll make his way back to the food bowl eventually after he sleeps off the drugs.

There's so much more in the world to talk about than grubs and poop and cats but it's all too much for me right now and so I will stick to the subjects I feel comfortable with. I can understand with all of my heart and with my bones and blood why chickens in the garden are a good thing, why a male cat needs to be neutered, but I cannot for a second understand what's going on out there, beyond my fence, beyond the boundary of my home where it would appear that the inmates are taking over the asylum, where the boundaries seem to get looser and looser by the moment and where The People (who ARE these people?) seem to feel quite comfortable with that.

No. Thank you. I'll stay right here where the fence separates me, metaphorically, at least, from all the rest of it, even with the open gate which leads to a road which in theory at least, could take me anywhere in the world I choose to travel.

For right now, I choose to stay right here where I am confused enough as it is, grounded as I am with shit and dirt and grubs and the small creatures, including me, living out our lives.