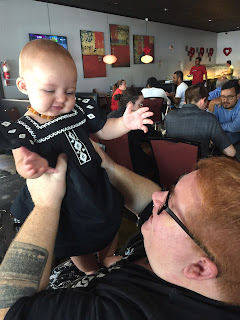 And thus, as promised...
Before I got a picture of Hank holding August, the little man had been tucked into his car seat, ready for transportation.
Ah well. There will be another day.
We ate lunch and then some of us went to the Big Lots where stuff was purchased and then to the Goodwill bookstore where I bought books for the children including a 3-D (glasses included!) book on dinosaurs entitled something like, "Dinosaurs In Your Face!" That wasn't quite it, but close. Hank and I perused the old books and there was yet another copy of "Little Women" which we did not buy because we both have at least four copies apiece and an old, old edition of "The Vicar of Wakefield" which, if you have read "Little Women" as many times as Hank and I have, you will remember as the book that Jo tucked into her pocket to read, along with a hot baked potato to keep her warm and fortified.
We sighed and I thought about how wonderful it is to have a child for whom that book title means as much to him as it does for me.
Although I do not believe in the "there are two types of people in this world" thing, I do sometimes think that there ARE two types of people in this world- those who have not read "Little Women" and those who have and whose lives were forever and eternally changed by it and who wanted to grow up to be Jo March.

I am feeling low today and a bit miserable but I realize that I've had a good week and Fortuna's Wheel (another literary nod- do any of you know it?) must spin and balance itself out.

I am making a good old American shepherd's pie with venison and potatoes and frozen vegetables along with fresh and here are two other pictures from the day. 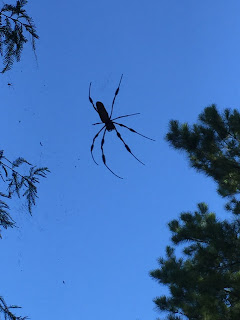 A spider, seemingly suspended in thin air whose web was so far above me on my walk this morning that I did not bump into it, and 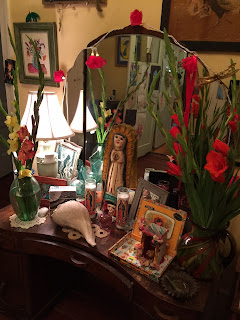 my gladiola-graced hallway altar. Publix has bunches of glads on BOGO this week and it's been forever since I bought some of them and so I purchased these and there's another vase full on a different table and this is all quite serendipitous as it was my darling Lynn who taught me about buying gladiolas at Publix and it was her birthday last week.

I think of her, I think of us all, I am glad to have these colors in my house.